A state panel charged with advising the governor and the Legislature on nuclear matters recommends that Entergy Corp. and the state work together to decommission the Vermont Yankee nuclear plant promptly after it closes next year.

The Vermont State Nuclear Advisory Panel, known as VSNAP, has no legal authority over this process. It is comprised of top officials from three departments and agencies, two members of the Legislature and two members of the public. Five of the six members in attendance voted on the resolution Wednesday, and they voted unanimously in favor of a quick and full restoration of the Vermont Yankee site.

The VSNAP members hope Entergy does not mothball Vermont Yankee with its 2,500 spent-fuel assemblies, which will be sitting in the plant’s spent-fuel pool after it closes.

“For the benefit of the people of Vermont, VSNAP recommends that all parties pursue a DECON decommissioning strategy for the Vernon reactor site, in order to promptly release the site for unrestricted use; and VSNAP encourages constructive dialogue between the state of Vermont and Entergy/Vermont Yankee toward these ends,” the resolution states. 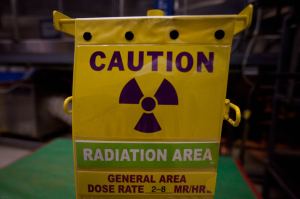 Vermont Yankee. Photo from The Commons

The timing of this resolution is important because it comes two days before the Department of Public Service is set to propose conditions for the plant’s new operating permit. The Louisiana-based Entergy Corp. is applying for a permit with the quasi-judicial Public Service Board to run the plant until the end of 2014, and the U.S. Nuclear Regulatory Commission (NRC) allows Entergy up to 60 years to dismantle Vermont Yankee.

The “DECON decommissioning strategy” refers to a quick dismantling, removal of spent fuel and decontamination of the site. “SAFSTOR” methods of decommissioning are lengthier and can involve preserving shuttered nuclear facilities for decades.

When Entergy bought the plant in 2002, it signed a memorandum of understanding with the state and Vermont’s two largest utilities, which have since merged under the Green Mountain Power umbrella. The agreement permits Entergy to “include the implementation of SAFSTOR or other forms of delayed decommissioning,” according to the document. It also stipulates that Vermont Yankee must remove all structures from the property and reseed the land, if necessary. The expected completion date for decommissioning at that time was March 31, 2022, or exactly 10 years after Vermont Yankee’s initial 40-year license expired.

Entergy spokesman Rob Williams was at the VSNAP meeting in Montpelier.

“As we’ve said, the preferred option is some period of SAFSTOR after the plant is permanently shut down, prior to dismantling,” he said. “At this point, it’s not yet clear how long that SAFSTOR might last. We’re developing plans around all of that.”

The NRC gives Entergy up to two years to submit their plans for decommissioning. Entergy representatives have repeatedly said that at that time they would divulge details.

The organizations that have banded together in the past to close Vermont Yankee are divided in their stance on how to best decommission the plant.

Ned Childs, president of the anti-nuclear New England Coalition, urged the panel to be tough with Entergy. He said that the finances should not be a primary concern, and the government should take over the process if need be.

“If the nuclear business is really this gigantic liability, as it truly turns out to be, then we need to get a bit more serious about dealing with it even if it means everybody is going to have to take out their checkbooks,” Childs said. “So we can go forward with this problem in the past and not sticking in our face for 60 years.”

The Vermont Citizens Action Network takes a different position on decommissioning than many of the other anti-nuclear groups. The network is advocating for an expedited SAFSTOR method that would last 15 to 25 years, rather than a full 60 years.

“If you go slowly and thoroughly, you’re allowing for more time for the financial instruments to do their thing,” said Chris Williams, president of the network. One of the issues at play is that Vermont Yankee has roughly $580 million in its decommissioning fund, and a DECON dismantling would cost roughly $1 billion. Williams also says it is less costly to take apart a plant when it has had more time to cool.

Williams and his group want the spent fuel to be removed from the pool and put into dry-cask storage containers as soon as possible. They want up to 60 percent of the workforce to remain on site to help with the process, and they want the site returned to a condition that does not restrict its future use due to radioactivity or contamination. The last request for unrestricted use mirrors that of VSNAP.

While the state and interested groups can pressure Entergy, the NRC has the final say over almost all decommissioning matters.

Thanks for reporting an error with the story, "Advisory panel pushes quick restoration of Vermont Yankee site"