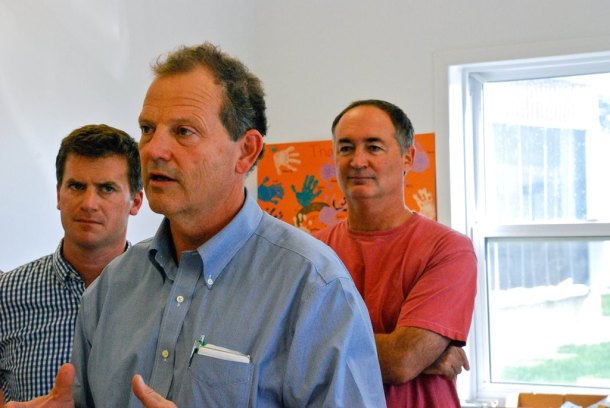 Waste from dairy farms and beer breweries could provide the necessary ingredients to grow algae-based biofuels, leaders of a project designed to research this technology said on Tuesday.

Matt Cota, executive director of the Vermont Fuel Dealers Association, announced that the U.S. Department of Agriculture awarded the association a $51,000 grant to research biofuel technology using algae during a news conference at the Nordic Dairy Farm in Charlotte.

The waste streams from beer breweries and dairy farms create a nutrient-rich concoction that could grow algae, which can then be used to make clean biofuel, according to Anju Dahiya, president and co-founder of General Systems Research, who is the project’s director.

The feasibility study will build on existing processes to create algae-based biofuel using Vermont ingredients, Dahiya said. The study will use the Nordic Dairy Farm’s anaerobic digester, which is currently not suited for the project, to capture phosphorous and nitrogen from manure, she said. The carbon-rich waste from the nearby beer brewery will be added to create algae.

The two ingredients, beer brewery waste and cow manure, can be found within a few miles of one another. At the top of a knoll in Charlotte is the Nordic Dairy Farm, owned by Clark Hinsdale, president of the Vermont Farm Bureau, and just down the road on Route 7 is the Fiddlehead Brewery, owned by Matt Cohen.

“There are not many places where you can see the entire supply chain in front of you,” said Richard Altman, executive director emeritus at the Commercial Aviation Alternative Fuels Initiative (CAAFI).

Altman is involved in the project because the fuel produced from algae is not only interchangeable with home heating and diesel fuel, but also jet fuel. 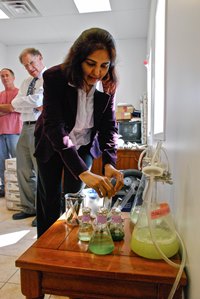 Dr. Anju Dahiya, president and co-founder of General Systems Research, discussed how beer brewery and dairy farm waste could be used to create algae-base biofuel during a news conference at the Nordic Dairy Farm in Charlotte on Tuesday. Photo by John Herrick/VTDigger

The Commercial Aviation Alternative Fuels Initiative is a sponsor of Farm to Fly 2.0, an initiative to develop and research bio-jet fuels across the country, which was extended in April, Altman said. There are plans to have similar projects that come up with creative renewable energy supplies for jet fuel in every state, he said.

Leaders on the project said the new technology could provide a boost to Vermont’s local economy.

Matt Cota said that algae-based biofuel could be clean source of heating fuel sourced from within the state. He said that heating fuel dealers spend more than $300 million a year on heating oil, some of which is purchased out of state.

Keeping this money inside Vermont’s borders could boost revenues for dairy farmers and Vermont fuel dealers, he said.

Chuck Ross, secretary of the Vermont Agency of Agriculture, Food and Markets, said the project offers an opportunity for farmers to diversify their income and build the financial resilience and stability of their business.

“This is the kind of activity that gives everybody the confidence that there are new ways of doing business that will be good for Vermont, good for our agriculture and good for our environment,” Ross said.

Thanks for reporting an error with the story, "Agricultural alchemy: Manure + brewery waste could yield biofuel"