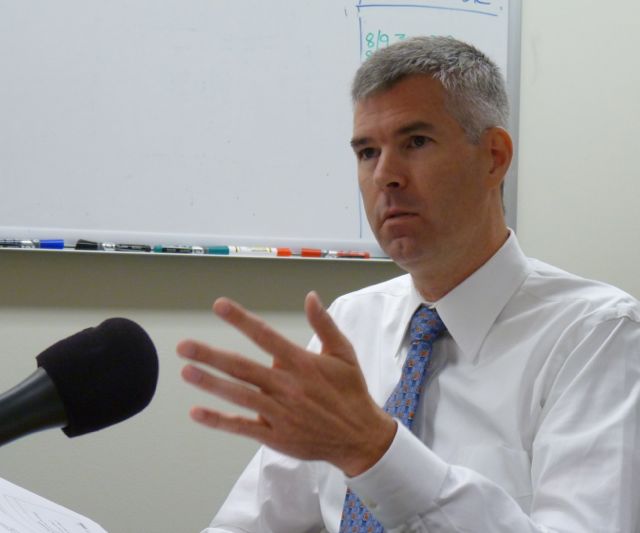 Mark Larson, commissioner of the Department of Vermont Health Access.

The multinational corporation building Vermont’s new health insurance market has fallen behind on key deadlines, and it was recently awarded an amended contract worth twice that of the original.

The contract is just $4 million less than CGI’s agreement with the federal government for similar services that will be used across the country.

The administration said CGI has failed to meet more than half of Vermont’s 21 performance deadlines, called “critical milestones.” Although the state has the contractual power to penalize CGI for falling behind schedule, it has not exercised this authority.

The state could charge CGI as much as $125,000 a day in penalties, depending on the length of the delay and the importance of the milestone.

Mark Larson, commissioner of Vermont Health Access, which oversees the implementation of the Web-based market, said late Friday he didn't immediately have information about which, if any, of the delayed milestones have been completed.

The CGI milestones include key functional components of the exchange, such as premium billing, verification interfaces and connections to necessary data hubs.

“We continue to reserve our right to assess liquidated damages, and we have chosen not to assess any at this point,” Larson said. “But we have not given up any right to do so.”

Tuesday, Vermont Health Connect is set to open for roughly 100,000 Vermonters buying health insurance plans independently or through businesses with 50 or fewer employees. Last week, however, the administration told VTDigger that Vermonters would not be able to actually buy plans on the market until Nov. 1.

Gov. Peter Shumlin called this hang-up a “nothing burger.” His top health care officials say they don't expect Vermonters to buy insurance in October when they are already covered, so delaying the payment portion should have little effect on enrollment.

Larson says Vermont Health Connect will be ready next week for Vermonters to subscribe to one of 18 plans offered by two insurers: Blue Cross Blue Shield of Vermont and MVP Health Care. But the payment mechanism for buying plans on the exchange will not be ready.

“Vermont Health Connect will be ready to support Vermonters and the purchase of their health coverage on Oct. 1, and I think that is our first priority,” Larson said. “The other topic is how are we managing our vendor, and whether we are holding them accountable to the contract we have signed. I believe we are fully aware of both of those priorities. And, of course, it is hard to assess the second before we have actually finished the work on the first.”

CGI did not respond to detailed questions about the missed deadlines.

“CGI is fully committed to supporting our client and their success,” spokesperson Linda Odorisio said. “Our work on behalf of Vermont Health Connect is currently on track to provide the technical capabilities required for an effective Oct. 1 implementation.”

Larson says the state has made "digital contact" with the Internal Revenue Service’s database. A complete connection with that database will be used to automatically determine a range of subsidies that are available to Vermonters earning up to 400 percent of the federal poverty level.

Larson also said the state has electronically connected with the two insurers. This is a crucial step because the insurers will need to receive payments and personal details in order to enroll Vermonters in their health insurance plans.

Kevin Goddard, vice president for Blue Cross Blue Shield of Vermont, reiterated Friday that the connection was just being created. Asked if Blue Cross had exchanged data with the state, he responded: “There may have been an initial file or two.”

When the state signed the initial contract with CGI in December 2012, it was worth $42.5 million. The contract was then amended three times, as were the critical milestones. Larson said the state changed them when it had more information on the project.

Larson said the bulk of the increase was a roughly $20 million addition to build the state’s new “integrated eligibility system.” This system is aimed at tying together eligibility systems for all human services programs, such as 3SquaresVT food benefits, health insurance subsidies, heating assistance and other programs.

An independent review of the state’s health IT projects last spring found that the state’s current eligibility and enrollment system for human services programs is “obsolete.” The same review estimated that Vermont Health Connect would cost the state and federal governments $427 million over five years.

This massive technological undertaking comes a year after three state IT projects went belly up: a new Department of Motor of Vehicles system, a judiciary case management program and a Department of Children and Families system.

CGI is an experienced player in the IT field. The company is building the federal health insurance market, and digital markets for some of the other 16 states that are running their own, such as Colorado and Massachusetts.

CGI’s contract with Vermont rivals that of its agreement with the federal government. A June report from the U.S. Government Accountability Office shows that CGI is charging the federal government $88 million for the exchange IT systems and front-end website, healthcare.gov, which will be used in more than 25 states.

The GAO found that the federal exchange was behind schedule.

Thanks for reporting an error with the story, "Builder of state's health care exchange misses key deadlines"