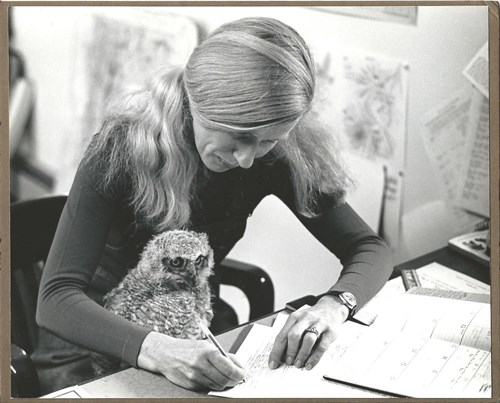 Sally Laughlin was the founder of the Vermont Institute of Natural Science, then a statewide environmental education and research organization, and its executive director from 1974 to 1992. One of the pleasures of her job was taking care of orphaned birds -- the young great horned owl became a star of the Owls of Vermont presentation and is seen in this 1977 photo assisting Sally at her desk. Courtesy of Sally Laughlin

The haunting call of a loon, echoing across the misty waters of a cool lake. The lightning-quick and deadly dive of a peregrine falcon. An osprey, clutching a fish in its talons as it wings over treetops. These can be witnessed in Vermont in large part thanks to Sally Laughlin, volunteer extraordinaire.

For 32 years, Laughlin volunteered 30 hours a month on the state Endangered Species Committee (ESC), a group of scientists that provides advice and expertise to state officials on the protection of endangered species. Some mornings, Laughlin got up at 3 a.m. to write recovery plans before going to work. Other times, she missed her family’s Saturday morning breakfasts for months at a time so she could monitor birds at the crack of dawn.

“I think the world of Sally,” said Steve Parren, a biologist with the Vermont Agency of Natural Resources. “She has been a mover and a shaker for three decades. She’s been through thick and thin and has hung in there and has done more work than anybody I can think of on the ESC. She’s wonderful.”

The 71-year-old Laughlin retired from the ESC on July 11, after Secretary of the Agency of Natural Resources Deb Markowitz informed her she would not be reappointed — Gov. Peter Shumlin apparently wants new blood on the committee. Laughlin was chair of the ESC for a total of 15 years.

During Laughlin’s tenure on the ESC, the common loon, peregrine falcon and osprey were all protected as endangered species in Vermont — and then taken off the list because they had recovered, an occurrence so rare that it has only happened three times in Vermont and not many more in the country as a whole.

Markowitz has high praise for Laughlin. “She is the grandmother of our endangered species law and really deserves recognition,” she said. “She brings so much passion and really a belief in the importance of good process, which I appreciate, and inclusion — inclusion of all voices, including the dissenting voices. Some of the listing decisions are controversial … and she really goes out of her way to make sure all of the voices are heard at the table.”

Ian Worley, a naturalist who has worked with Laughlin for most of the time she’s been on the ESC, speaks highly of Laughlin as well. “Sally is a really pleasant and engaging person, ever honest and straightforward in deliberations, chairing the committee, leading workshops, and participating in public hearings. She holds to her responsibilities to a statute, an appointment, or a species with a firmness that we all admire.”

Laughlin’s service to the birds and bird lovers of Vermont began in 1972, when she founded the Vermont Institute of Natural Science (VINS). Laughlin was executive director of VINS for 18 years, during which the organization taught 5,000 children a year about Vermont’s environment and birds of prey. 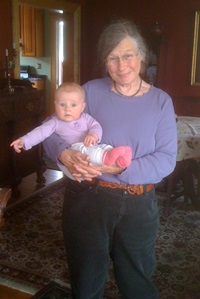 In the late 1970s Laughlin monitored birds for the first Atlas of the Breeding Birds of Vermont. This atlas, published in 1985, details where each species of bird that breeds in the state can be found. The work Laughlin and others did for the atlas revealed that some birds, formerly abundant in Vermont, no longer bred here. That information fueled the passing of the state Endangered Species Act in 1981, a law Laughlin helped write and lobby for.

After that, the work was clear: She was appointed chair of the newly formed ESC. Laughlin helped write recovery plans for species like the common loon, peregrine falcon and osprey, often writing from 3 until 6 a.m. before going to work.

One of the first things Laughlin did as chair of the ESC was to create Scientific Advisory Groups that included experts on plants, birds, mammals, fish, reptiles and amphibians and invertebrates. These groups provide up-to-date information on candidates for the endangered species list. That information — like where a species is found, what kind of habitat it needs, what kind of disturbance it can tolerate — is invaluable when it comes time for the Agency of Natural Resources (ANR) to protect a given species.

“I’ve always felt that about the only way you get anything done in life is having people working together,” said Laughlin about the Scientific Advisory Groups. She said the scientific information the ESC provides has never been challenged, it’s that good.

Of course, Laughlin knows the state may not follow the ESC’s advice. One example of this is the mudpuppy, a species that, according to Laughlin, clearly met the criteria for being listed as endangered. The state chose not to list it because mudpuppies are killed by lampricide, which the state uses to kill the lampreys that are parasites on sport fish.

She has a lot to be proud of. Laughlin has received a number of awards for her work, including the Central Vermont Public Service-Zetterstrom award in 2010, the Franklin Fairbanks award in 1993, and the Governor’s Award for Environmental Excellence in 1988.

After Laughlin’s stint as executive director of VINS, she remarried and moved up to northern Vermont. There, she worked as director of development and alumni relations for Johnson State College, a job she called her vocation, not her avocation. She retired last year.

In addition to the ESC, Laughlin coordinated the Woodstock Christmas Bird Count for over 30 years, served on the boards of two ornithological groups including chairing one for 20 years, edited two books, and is the president of the Friends of the Green River Reservoir. She plans on taking on a new volunteer gig now that her work for the ESC has come to an end.

Laughlin’s dedication to service runs in the family. An eighth-generation Vermonter, Laughlin grew up in Castleton with parents who donated their time to civil service. Her father was in the Legislature, while her mother’s list of roles is long like Laughlin’s: president of the Vermont Federation of Women’s Clubs, President of the Association of University Women, first president of Rutland County Audubon, president of the Vermont Audubon Council, and member of the state Board of Education.

“My parents were very adamant that you had to give back to your state,” said Laughlin. “I just grew up thinking that’s what you were supposed to do.”

Laughlin’s mother’s love of nature was passed on to her daughter. Laughlin’s 18-month-old granddaughter is true to her roots, too. “She pats trees, I’m so proud of her,” crowed Laughlin. “Oh, and she also waves to birds. She knows ‘robinbird’ and ‘starlingbird.’”

“I think that’s the right idea,” Laughlin went on, “that there are other life forms on this planet with us.”

Laughlin’s love for Vermont is so strong that she has only ever lived out of state for four years, during college. She now lives in Cambridge, on property her husband has owned since the 1950s. They grow their own food and hang bird feeders during the summer.

Along with Laughlin, committee member Worley retired last month. They will be replaced by Dorothy Allard, a botanist at the University of Vermont, and Jim Shallow, conservation and policy director for Audubon Vermont.

Working on a committee that documents the decline — and occasional recovery — of biological diversity, Laughlin sometimes feels despair. “It’s really very scary to see what humankind has done,” she said. But she finds renewal in nature. “I guess for myself when I think about that, I have to think about the good things we’ve done, and the next thing I do is go for a walk in the woods behind our house and visit some trees. I’ve always loved trees.”

Laughlin also finds strength in her avocation. “If I’m not doing something of that sort [like work on the ESC], then it’s easier to be discouraged. I think I’ve got to get back involved in doing something that I believe in.”

Laughlin’s dedication to Vermont’s environment comes from a simple, yet profound, ethic. “My personal goal has always been to live in harmony with nature. I just feel it’s so necessary to feel your roots entwining in nature’s web.”

Thanks for reporting an error with the story, "Vermont's inhabitants – human and otherwise – owe much to volunte..."