The CEO of ISO New England, the regional power grid operator, told Gov. Peter Shumlin this week that Green Mountain Power has known for “nearly two years” that the northern Vermont grid is in no shape to fully handle its 21-turbine Lowell Mountain Wind Project.

Gordon van Welie’s Tuesday letter indicated that it should be no surprise to Shumlin or to GMP that ISO sometimes cuts back power production at the 64.5 megawatt Kingdom Community Wind (KCW) project. And he said that a piece of equipment aimed at mitigating the curtailments would not prevent the power cuts completely.

“GMP’s decisions regarding the location, design, construction, and interconnection of its KCW project have resulted directly in the need for ISO to curtail the project’s output in order to maintain reliability,” he wrote. “GMP has known for nearly two years that absent certain required upgrades to the transmission system the output of KCW would be exposed to curtailment. GMP has also known that even after the required upgrades were completed, the output of KCW may still be subject to curtailment because of the project’s location and interconnection point.” 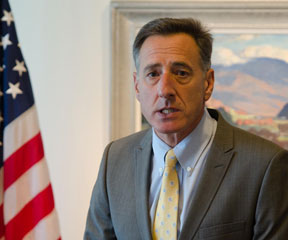 Van Welie’s message to Shumlin is a direct response to a letter the governor sent last month, urging the operator to stop curtailing Lowell during peak demand times. Shumlin’s letter was sparked by those curtailments, and as ISO ordered GMP to fire up diesel and jet-fuel generators across the state. For more on this issue, read here.

Grid officials have repeatedly said that Lowell is tied into a particularly weak point in the grid with low demand and other large renewable energy generators, such as Hydro-Quebec and the Sheffield wind project. Van Welie contends that curtailing the project did not directly result in more carbon-intensive energy production.

“In this case, curtailing KCW actually allowed more power to be supplied from other renewable resources in the area and not older fossil-fueled generation as your letter suggests,” he wrote. “Because of its location, KCW was competing with other wind and hydropower resources for limited space on the transmission system. As GMP knows, while the transmission system in the area where it chose to interconnect can reliably serve the demand for power, it was not designed to accommodate additional generation resources.”

While Shumlin was not available to comment on the situation, deputy commissioner of the Public Service Department Darren Springer, spoke for the administration.

“On the particulars of Lowell between GMP and ISO New England, there appears to be some differences of opinion,” Springer said. “But for the Public Service Department and regulators, we’re looking at how to have good policy on this moving forward. We’re going to look to make sure that we know … how future projects will be able to operate.”

In Shumlin’s letter, the governor also urged ISO to include small renewable energy projects in its planning, and Van Welie said the grid operator is looking for ways to account for more widely distributed generators.

Springer said doing so could reduce growing electric costs for Vermonters — an issue that is beginning to emerge.

“We appreciate the need to account for distributed generation in the load forecast, which can save transmission construction and save ratepayers’ money,” he said.

Thanks for reporting an error with the story, "Grid operator tells Shumlin state knows why wind energy cutoff is req..."