Full disclosure: Twice during his years in Washington, already decadent though not nearly as decadent as now, your humble agent was offered positions in a political consulting firm, offers rejected thanks to the naïve conviction that something in life was more important than the wherewithal to have one’s own Beechcraft. 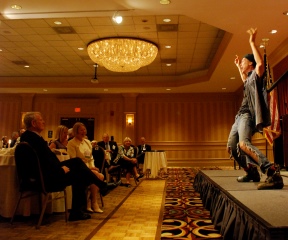 Rusty Dewees performs as "The Logger” at the 20th anniversary dinner of the Ethan Allen Institute in South Burlington on Wednesday. Photo by John Herrick/VTDigger

OK, it’s a little more complicated than that. The consultants also write bumper sticker slogans, create TV commercials and buy the time for showing those commercials, usually pocketing a percentage of the fee. But for today’s discussion, the business about telling candidates what they ought to know anyway will suffice.

Had those offers been accepted, the following advice to would-be, wanna-be, perhaps about-to-be political candidate Rusty DeWees would cost at least thousands, probably tens of thousands, perhaps even hundreds of thousands of dollars. Instead, here it is for free. A valuable – if not invaluable (which, logic be hanged, means even more valuable than valuable) – piece of political consultation totally gratis, complementary, on the house and with no charge.

Also short and to the point:

Because he’d regret it. The rest of us might not. A DeWees campaign for Congress – apparently the only office he’s considering – could be amusing and perhaps interesting.

But successful? Not likely.

Let us stipulate at the outset, that Stowe's Rusty DeWees is a fine fellow. People who have worked with him say he is a straight-shooter and a real pro. His skills as an entertainer are obvious. He says he really likes people and there’s no reason to doubt him. And from the (rather skimpy) evidence at hand – primarily a story in Sunday’s Burlington Free Press and a piece in Digger last month – he’s a political novice, but neither an extremist nor a dunderhead.

The center is a good place for a politician to be. The problem is that in this state being slightly left of center is by far a better place to be, and DeWees either is or (and it makes no difference which is true) easily paintable as being slightly or maybe not-so-slightly to the right of center.

He has discussed a potential candidacy with former Johnson Rep. Floyd Nease, a solid liberal Democrat, but more recently and more seriously with former Republican Gov. Jim Douglas. And just a couple of months ago he gave one of his “Logger” performances at a dinner put on by the decidedly right-of-center Ethan Allen Institute.

That was a gig; it’s what he does for a living, so any political endorsement is conjectural and inferential at best. But in a campaign, conjecture and inference can be manufactured, and should DeWees run, they would be. 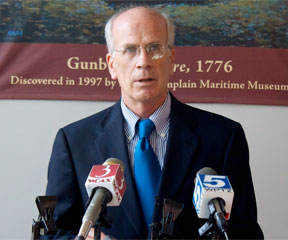 DeWees indicated that he would run as an independent, eschewing party labels. But to eschew is not necessarily to escape. He would run against Rep. Peter Welch, a Democrat, who would have every reason to try to plant in the public’s mind that, label or no, DeWees is for all practical purposes a Republican.

The good news for DeWees is that he would then face Welch one-on-one, not counting a minor-party or otherwise frivolous challenger or two. The bad news is that it makes it easier for Welch and the Democrats to paint DeWees as a de facto Republican. All Welch would have to say – and he wouldn’t even have to say it, just suggest it – is, “I’m the Democrat. That other guy is my opponent.” Who opposes Democrats? Republicans.

Besides, Welch is a four-term incumbent. In many states, that’s a problem, leaving the office-holder open to the charge that he has been in Washington too long, has lost touch with his constituents and needs to be replaced by someone who has not been corrupted by “the system,” whatever that may be.

Vermont is not one of those states. In vast swaths of the land, “throw the rascals out” is an effective slogan. Vermonters prefer to throw their rascals right back into office. The only three incumbents to lose recent statewide races were auditors. Two of them lost solely because they were Republicans, one of whom got elected on a fluke, the other as a Democrat.

No politician is unbeatable. Peter Welch comes close. He’s a Democrat in a Democratic state. There’s not been a whiff of scandal or impropriety anywhere close to him. He’s highly regarded in Washington and seems to work well with the Republican majority in the House. And Vermonters are going to replace him with a … a comedian?

Those who enjoy spinning scenarios can spin one making DeWees competitive: Anti-wind power and anti-F-35 forces combine to put up a candidate against Welch, who favors both utility-scale wind and basing the planes in South Burlington. That candidate siphons off left-of-center votes from Welch, allowing DeWees to squeak through with a plurality.

Interesting scenario, but – like most scenarios – fiction. Many oppose both the wind towers and the airplanes. Few are likely to base their votes on that opposition. DeWees would have to beat Welch with little or no help from protest candidates. He can’t.

If Welch has a political flaw it’s that he’s … well, let’s just say he’s not a million laughs. He is somber, which can come across as pompous. DeWees would be superb at deflating that pomposity. That might make the campaign enjoyable. It would not make it winnable for the challenger, whose humor occasionally has a cruel edge that works in entertainment, but not in campaigns. This is a case where the admired entertainer risks becoming the humiliated politician.

Performers risk humiliation every time they step on stage so maybe DeWees is willing to risk it. Maybe he’s convinced he has something to say that’s so important that it’s worth getting clobbered at the ballot box to get his message across.

The honest political consultant, though (and there are a few) should tell him to try another way to do that – a book, a movie, a whole new theatre company, a new character to replace (or supplement) his well-known Logger.

But run for Congress? As in, running to win?

Not him. Not here. Not now.

Thanks for reporting an error with the story, "Margolis: A Rusty DeWees candidacy would be entertaining, enoyable, u..."