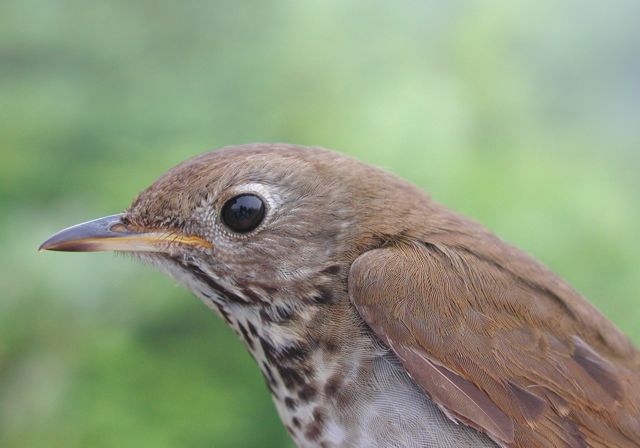 Bicknell's thrush on East Mountain. Photo by Steve Faccio. Used with permission from the Vermont Center for Ecostudies

A report released this month by the National Wildlife Federation details widespread and dramatic changes in bird populations as a result of climate change.

“The evidence is now overwhelming that climate change is the most pervasive and long-term threat to bird populations here and across the world,” said Jeff Wells, a senior scientist with the Boreal Bird Initiative. Wells spoke, along with two other bird biologists, in a telephone news conference Monday sponsored by the National Wildlife Federation to discuss the report, entitled “Shifting Skies: Migratory Birds in a Warming World.”

Many changes have already occurred, including the loss of Bicknell’s thrush from Mount Greylock in Massachusetts and the arrival of black vultures, a formerly southern species, in Vermont. Other changes are predicted, like the loss of the saltmarsh sparrow and the possibility that black-capped chickadees might be found only in northernmost Maine and Canada before long.

It’s not just the birds that will be affected. Birding and hunting translate into business. Bird-lovers spend $54 billion a year in the United States, including $4 billion on birdseed, according to the new report. Game bird hunters spend nearly $2 billion a year.

According to the U.S. Fish & Wildlife Service, of the more than 1,000 bird species in the U.S., a third are threatened, endangered or of conservation concern. Roughly 350 species are migratory, which makes them especially vulnerable to climate change.

According to Wells, migratory birds are arriving at their breeding grounds in the U.S. an average of two weeks earlier than they did 50 years ago. The bird species that migrate further are arriving only a few days earlier than they used to. This may sound promising, except that the timing is essential for their survival. Plants are flowering and fruiting earlier, insects are hatching earlier and the result is that some birds arrive late to the table and can’t feed their young enough to survive.

One example of this dislocation is the Atlantic puffin. These black and white birds that nest in burrows on the rocky islands along the Maine coast were brought back only recently from the brink of extinction. Yet last year puffin breeding success fell to less than half of what it had been because their preferred fish disappeared due to warming seas. Instead, parent puffins tried to feed their young the only available fish, which was too big for the baby puffins to swallow.

“We’ve lost between 20 and 50 percent of boreal species which previously bred in Vermont,” Galbraith said.

Sea level rise is another serious problem for birds. Pam Hunt, a senior scientist at New Hampshire Audubon, said scientists predict sea level to rise 3 feet by the end of this century. This will affect birds that rely on coastal marshes and beaches, like the saltmarsh sparrow and the piping plover.

Salt marshes are highly productive ecosystems that support many species of birds. According to Hunt, if sea level rise was gradual, the salt marshes would have time to migrate inland. But the rise is rapid and salt marshes are hemmed in by highways and cities, so they are stuck between what Hunt called “a rock and a wet place.”

Piping plovers, a federally threatened species, nest on beaches. As sea level rises, they’ll lose beach area, but they’ll also become more vulnerable to storms that will flood and even wipe out their habitat.

Ruby-throated hummingbirds, which complete an astonishing annual migration across the Gulf of Mexico in one unbroken flight, will also be affected. They are the East’s only hummingbird, though rare visitors from the West pop in occasionally. In Massachusetts, ruby-throated hummingbirds arrived an average of 18.4 days earlier over a 30-year period. According to Wells, the relationship between these iridescent birds and the flowers they depend on for food is unclear, but it’s possible that the mutual dependence of hummingbirds and flowers could be coming unhinged.

One serious concern for ruby-throated hummingbirds is the increase in hurricane intensity as they cross the Gulf of Mexico. A hummingbird’s chance of survival in a hurricane might be worse than an ice cube’s chance in hell.

Hector Galbraith, Northeast regional scientist for the National Wildlife Federation, is especially concerned about migratory species like the ruby-throated hummingbird. “Many of those migratory species are possibly even more vulnerable than the less migratory species because they integrate at a global scale all of the different aspects of climate change rather than just one regional aspect.”

One example of this vulnerability is the Bicknell’s thrush. This brownish relative of the American robin, with a buff-colored breast with black streaks, nests in spruce-fir forest above 2,700 feet. As these trees die off in the lower elevations and in the southern regions of New England, the bird has fewer places to breed. A temperature increase of 5 to 6 degrees Fahrenheit in July, which current trends in greenhouse gas pollution are headed for, could wipe out 90 percent of the Bicknell’s thrush habitat in the U.S. According to Hunt, under some models the only habitat left for this thrush by the end of the century will be on Mount Katahdin in Maine and the Presidential Range in New Hampshire.

“People will drive from all over the U.S. or fly to Boston to go look for Bicknell’s thrush in the White Mountains because it’s fairly accessible,” said Hunt. Hunt’s point is that aspects of the regional economy depend on birds — puffin tourism, boreal bird tourism — and the prognosis is not good.

Worse, the thrush is susceptible to climate change at the other end of its migration in the Caribbean, where droughts are predicted to become more severe.

Galbraith is concerned about other iconic boreal bird species, too, whose ranges are contracting northward.

Galbraith is worried that “Somewhere out there in the future there’s going to be a catastrophic threshold. We cross that threshold and we will see these losses and these changes accelerating, becoming exponential.”

“We’ve lost between 20 and 50 percent of boreal species which previously bred in Vermont,” Galbraith said.

At the same time, southern species are moving northward into New England. Galbraith has seen red-bellied woodpeckers increase from one pair in Massachusetts 25 years ago to hundreds or thousands of the birds across New England today. Black vultures, previously found no farther north than New Jersey, have moved northward by nearly a thousand miles.

“So doesn’t it all wash out in the end?” asked Galbraith. “I don’t think so, because most of the species which are spreading from the south are generalist species. They can survive in a wide variety of habitats. The species that we’re losing, the boreal species, are specialist species.”

Galbraith went on, “It’s not the case that the birds coming up from the south are simply replacing the birds that are contracting to the north. ... As far as I’m concerned, this is a net loss.”

As bad as the current state of affairs sounds, there’s worse to come. “Don’t forget we’ve only seen the tip of the iceberg, no pun intended,” said Galbraith. “So far, temperatures in New England have risen by about 2 or 3 degrees in the last 50 years. We’re expecting, even under the more conservative projections, we’re expecting another 4, 5, 6, 7 degrees.”

Galbraith is worried that “Somewhere out there in the future there’s going to be a catastrophic threshold. We cross that threshold and we will see these losses and these changes accelerating, becoming exponential.”

For the three scientists speaking in the telephone news conference, the solutions are clear, even if the political path to them is not. “We need to reduce carbon pollution, we need to invest in clean energy and energy efficiency, and we need to also think about protecting and restoring forests, wetlands, and other natural habitats that absorb and store carbon and that are important arks for these species into the future,” said Wells.

“We are seeing changes and that is for sure,” said Galbraith. “But if we don’t get our act together, we are going to see some major changes in the future which will make the changes that we’ve already observed look pretty penny ante. So we cannot afford to say, ‘oh, well, game’s over, we may as well just live with it’.”

Thanks for reporting an error with the story, "Climate change threatens migratory birds and bird-dependent economy, ..."