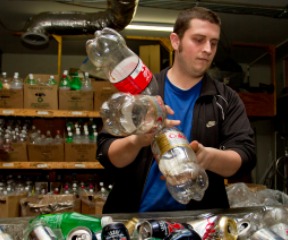 Supporters of legislation that would expand the state’s bottle bill stepped out in front of a long-standing debate over the issue on Thursday — one day before the Vermont Agency of Natural Resources is set to release a cost analysis of the state’s bottle redemption program.

Legislators and advocates at the Statehouse voiced support for two bills: H.375 and S.65 .

These bills would expand Vermont’s bottle redemption program to include all recyclable beverage containers, except those containing milk. Only carbonated drinks and liquor are redeemable under present law, which was originally passed in 1972 to address litter problems.

The current statute places a 5-cent fee on carbonated and malt beverages that is refunded to customers when they return their empty bottles to a certified redemption center. The deposit is 15 cents for liquor containers greater than 50 milliliters.

Supporters of the expansion say it would improve recycling, provide more jobs and save energy. Opponents say that it would further an inefficient recycling system and raise the cost of an already-expensive program.

A Vermont Public Interest Research Group (VPIRG) report released on Thursday, which was written in support of the bottle bill expansion, points out that the recycling rate for “non-deposit” containers in Vermont is less than 40 percent, while the rate for “deposit containers” is 85 percent.

“Expanding the Vermont bottle bill is simply a no-brainer,” he said at a Statehouse press conference on Thursday. “By expanding the bottle bill to other containers, we’ll see less trash along our roadsides … and we’re going to see more jobs. The bottle bill is the best example of an environmental law that supports and creates jobs as it goes about cleaning up the environment.”

But many members of the beverage industry are not on board with Pollina’s train of thought.

Kevin Dietly is a principal at Northbridge Environmental Management Consultants of Westford, Mass., which administers the commercial end of the redemption program for roughly 75 percent of the beverage industry in Vermont. His firm works closely with the Vermont Beverage Association, which opposes the expanded bottle bill. Northbridge also provided industry data for the state’s upcoming cost-analysis, which was mandated by a universal recycling bill, Act 148, last legislative session.

According to Dietly, the state’s redemption program costs the industry a net $7.3 million annually, after the $4.6 million value of the materials is subtracted and the $1.4 million in unclaimed bottles is accounted for.

His firm projects that the expanded bill would increase the state’s recycling rate by a minimal amount – just a quarter of one percent – and cost the industry almost twice what it’s paying now.

“It’s not a lot of bang and enormous amount of bucks,” he said.

The high costs would stem from having to sort an increased range of bottle types, Dietly said. Teas and juices come in a range of shapes and sizes, unlike soda and beer bottles, which are more uniform.

He also explained how “dreadfully inefficient” the state’s recycling program is. He said it shouldn’t be about the products, but rather the materials that are used for those products.

“What you really want to be doing is handling multiple materials in large quantities all at one time,” he said. “You need to be getting more of everything, but getting it less often. Having someone redeem maybe a tenth of their recyclables when they have a truck that picks up 90 percent of the rest of those materials is not very smart economically or environmentally.

“There are literally millions of miles being driven every year just to redeem those items,” he said.

Not all industry players, however, are against the current bill or the proposed expansion.

Bob Coloutti, who runs a discount beverage store and redemption center in Rutland, is a big supporter of the bottle bill.

“I have nine employees that handle redemption full time for me,” he said. “Without the redemption bill, those people would be unemployed without having to think about it; it’s just a matter of numbers.”

Thanks for reporting an error with the story, "Debate heats up on expansion of Vermont’s bottle bill"