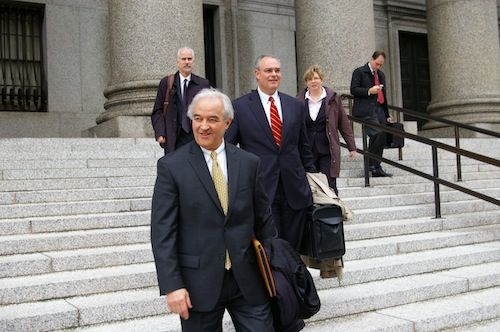 Three federal judges in the U.S. Court of Appeals will decide the fate of the Vermont Yankee Nuclear Power Plant and the authority that Vermont’s government has over it.

This appellate hearing comes roughly one year after the state lost a lawsuit filed by Entergy in a lower federal court.

Front and center again was the question of whether Vermont legislators enacted legislation that gave them power to effectively shut down Vermont Yankee for safety purposes. But this time the justices raised new concerns, and Frederick played into them, arguing that the legislation had as much to do with economic factors as anything else.

While Entergy argues that state statutes are trumped by federal jurisdiction over safety matters, Vermont says that state legislators are not precluded from discussing such issues, based on a precedent set by a 1983 U.S. Supreme Court decision.

The Vermont legislation does not directly mention the term safety.

How did Vermont get here?

The dispute between the state and the Louisiana-based company stems, in large part, from two bills enacted by the Vermont Legislature in 2005 and 2006: Acts 74 and 160.

Act 160, which became part of Title 30 of Vermont’s statutes, states that “no nuclear energy generating plant within (Vermont) may be operated beyond the date permitted in any certificate of public good … unless the general assembly approves and determines that the operation will promote the general welfare.” Act 74, now part of Title 10, requires Entergy to first obtain legislative approval before storing spent fuel at the plant’s site after March 21, 2012, which is when the state’s initial permit expired.

Following the approval of this legislation, the Vermont Senate voted 26-4 in February 2010 to block Entergy from seeking a 20-year renewal of its license from the Public Service Board. The legislators raised concern over tritium leaks and false testimony by plant officials. But the federal Nuclear Regulatory Commission in March 2011 found no reason to shut the plant down based on radiological safety and extended Yankee’s federal license for another 20 years.

One month later, Entergy filed a lawsuit against the state of Vermont on the grounds that state officials were attempting to preempt federal authority and impede interstate commerce.

U.S. District Court Judge J. Garvan Murtha sided with Entergy in January 2012. He authorized Entergy to continue operating Vermont Yankee past its state-mandated shutdown date. Murtha decided that:
• Vermont’s ability to enforce Act 160 is preempted under the federal Atomic Energy Act.
• The state’s power to enforce Act 74 is preempted under the same act.
• The state is prohibited, under the constitutional dormant Commerce Clause, from “requiring Vermont Yankee to sell power to Vermont utilities at rates below those available to wholesale customers in other states,” as the court judgment reads.

One of the driving forces behind Murtha’s decision was that legislators expressed concern about safety when they drew up these bills, although the bills don’t explicitly attempt to regulate Vermont Yankee on the basis of safety. This judgment is significant because safety falls under the jurisdiction of the Nuclear Regulatory Commission.

Roughly one month after Murtha’s decision, Vermont Attorney General William Sorrell then filed an appeal of the decision. Rather than go head-to-head once again with Entergy’s attorney, Kathleen Sullivan, Sorrell brought in Frederick, an attorney with a robust U.S. Supreme Court background. To date, the state has paid out just shy of $258,000 to Frederick’s firm.

That’s a fraction of the $4.6 million that Entergy wants Vermont to pay for Sullivan’s legal fees for the Murtha case. If Frederick convinces the judges that the constitutional Commerce Clause is not valid in this instance, then the state would be off the hook for covering her charges.

“That’s a multimillion dollar issue quite apart from the outcome of whether legislation is there or not,” said Sorrell on Monday. “We want to win outright, but prevail there … (and) paying David’s firm is going to be one of my better financial decisions as attorney general.”

After months of back and forth, Frederick and Sullivan took Vermont and Entergy’s arguments to the 17th floor of the Thurgood Marshall Courthouse in downtown Manhattan.

With 15 minutes set aside for each argument, Frederick kicked off the hearing, as it is Vermont’s burden to prove that Judge Murtha’s ruling deserves to be overturned. Sullivan then had her turn, and Frederick was given time for a final rebuttal.

Central to both sides' arguments was that lingering question of whether Vermont legislators enacted Acts 160 and 74 for safety purposes.

But Judge Carney and her fellow justices asked a new question.

“Does the mere mention of public health and safety torpedo the whole legislation, and why should it?” inquired Carney during Sullivan’s testimony.

“We think that the standard under this court’s precedent is if any safety purpose is involved, we win,” said Sullivan. “It is preempted.”

Frederick countered this argument in his rebuttal by pointing to a section of the federal Clean Air Act that gives states the authority to regulate the emission of radionuclides, and he mentioned the role that the state plays in the Nuclear Regulatory Commission’s permitting process.

“The notion that states can’t do anything concerning safety, even study the issue, is false and has been rejected by the Supreme Court,” he said.

Frederick then pointed to the Supreme Court case that has established much of the legal ground for Vermont’s current dispute with Entergy: Pacific Gas and Electric Company vs. California State Energy Resources Conservation and Development Commission. In that 1983 decision, the U.S. Supreme Court held that California was not preempted by the Atomic Energy Act and could impose a suspension on the licensing of nuclear plants within its boundaries for economic reasons.

“What motivates one legislator to vote for a statute is not necessarily what motivates scores of others to enact it,” Frederick cited verbatim from the Supreme Court decision.

“It would be particularly pointless for us (the Supreme Court) to engage in such inquiry here when it is clear that the States have been allowed to retain authority over the need for electrical generating facilities easily sufficient to permit a state so inclined to halt the construction of new nuclear plants by refusing, on economic grounds, to issue certificates of public convenience in individual proceedings.”

“You should hold … that if safety is the primary purpose, we win,” she said. “Every single non-safety purpose that the state pasted into its legislative preambles … is an implausible reason to shut down a merchant generator.”

Frederick struck a chord that seemed to resonate with the justices. The state, he said, could bear a significant financial burden for cleaning up the plant if Entergy went bankrupt or abandoned the plant after years of use.

“It seems from a distance that the state may have a legitimate financial rationale for its concern about having to pay for the maintenance and care of spent fuel if Entergy should have to leave the state, and that stockpile continues to grow,” said Carney.

To listen to the entire oral arguments, click the play button below. Due to sound system problems at the court, the quality of sound for the first one minute and 40 seconds is poor.

The impact of the case moving ahead

“Anytime you’re dealing with a court of appeals, they have their own timetable,” Frederick said after the hearing. “It’s obviously a very complex matter, and they recognize the complexity of it.”

From here the case could go any number of directions: from a re-argument to a hearing in front of a nine-judge panel to a conclusive decision. Either way, said Frederick and Sorrell, the outcome of this case will have a significant effect on the way state legislators operate.

“The difficulty is that (Judge Murtha’s) methodology is so flawed that it would create real problems for state legislators,” Frederick said. “They would not know what they can say or not say with respect to matters in the realm of their prerogatives or authority. That’s one of the main problems with his (decision): that you look at statements made by committees before enactment and then you disregard what the final bill says.”

“What Judge Murtha did here could have a chilling effect on the traditional freedom of legislative debate,” said Sorrell. “It’s in the legislative House where you want discussion and debate … If the legislators have to keep quiet and not say anything for fear that down the road some comment by a handful of legislators is said to be speaking for all 180 legislators, that would be a distortion and a real shame.”

While Sullivan declined to comment, Entergy spokesman Jim Steets fielded questions about the case in front of the courthouse.

“The implications for Vermont’s economic and energy future are significant,” he said. “There are 625 employees. Our commitment to safety is just unparalleled. We think Vermonters' interests are best served with that plant continuing to operate.”

Also present at the hearing — among the many Vermont academics, activists and lawyers — was Vermont Law School professor Cheryl Hanna, a constitutional law expert.

She said the state’s decision to bring in David Frederick was a game-changer.

“Frederick did a particularly impressive job, and it makes me wonder had Frederick represented the state from the beginning if we would have seen a different outcome at the initial trial,” she said. “I think at Brattleboro (in front of Murtha) they had a much harder time articulating why safety reasons weren’t the motivation for it.”

Sorrell said after the hearing that he was glad he brought Frederick on board.

“I’ve had some hugely accomplished lawyers working close to 24/7 on this case since it was filed,” he said. “But here we are at the second circuit; it’s a different league. And we wanted to fight fire with fire.”

Thanks for reporting an error with the story, "Appellate judges hear Vermont Yankee case"