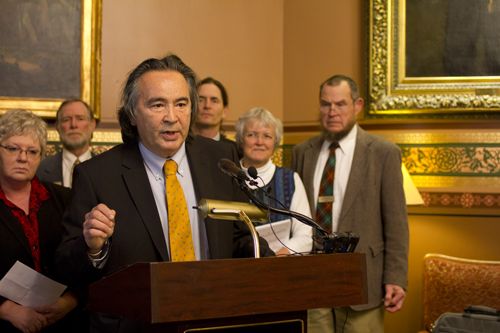 Progressive lawmakers sharply criticized the Shumlin administration’s proposal to take $17 million from a popular tax credit program to invest in childcare assistance, describing the proposal as a targeted tax increase on the state’s poorest residents.

“We disagree strongly with the proposed funding mechanism for early education,” said Sen. Anthony Pollina, P/D-Middlesex, at a Statehouse press conference. “Diverting money from the earned income tax credit is essentially a new tax that is going to hit about 40,000 Vermonters, particularly those who are least able to afford it.”

After Pollina described the proposal as actually “worse than a broad-based tax,” alluding to Gov. Peter Shumlin’s pledge not to raise such taxes, Rep. Chris Pearson, P-Burlington, added that the administration’s plan “is not a serious proposal.”

“I have yet to hear from any Democrat that supports this idea. Republicans have articulated their concerns, and Progressives are solidly opposed to this funding scheme,” said Pearson. “There is no reason to cut the most effective anti-poverty program in Vermont.”

Accompanied by a handful of other lawmakers, Pearson and Pollina tentatively suggested increasing the income taxes for those earning over $200,000, by less than 1 percent, ending tax loopholes for the wealthy and large corporations, and reforms to the capital gains tax.

But more detailed proposals would only emerge within the next two weeks, said Pearson. In the meantime, the Shumlin administration’s proposal has already generated opposition from advocates and raised eyebrows from some lawmakers.

After the Progressives made their case, Agency of Human Services Secretary Doug Racine told reporters that state officials wanted to divert funds from the EITC because they believed that’d make the most of limited dollars for state services.

Racine said only the governor could say whether alternative funding proposals would be seriously considered. He added that the proposal would mean a 15 percent reduction in tax refunds and credits for those already using the EITC, but clarified that the federal EITC would remain untouched.

“The Legislature has to start by saying: Do we want to increase child-care subsidies?” said Ashe.

Ashe himself hasn’t decided yet whether the $17 million figure is a suitable target. He’s also wary of pronouncing definitively who would win or lose under the administration’s proposal because he says not enough facts have emerged.

Still, Ashe said: “I agree, in spirit, that the initial reflex of the Legislature should be: Prove it to me. Prove to me that this makes any sense whatsoever, to take from EITC.”

Ashe said his committee planned a serious review of the state’s tax exemptions, to see whether extra funds could be freed up there by slashing arcane and outdated exemptions. But he didn’t know how much might become available, or whether that money might fund child-care subsidies or other state programs.

Pearson, meanwhile, said that the charged proposal could be a well-placed political ploy.

“Gov. Shumlin is a skilled politician, and I fear this is a diversionary tactic,” Pearson said. “Perhaps he hopes his laughable revenue plan will be enough to distract lawmakers and advocates from the budget cuts we expect next week.”

According to Racine, spending on EITC has increased by 45 percent since 2005. The tax exemption for low-income Vermonters is by far the most expensive tax credit for personal income for the state, costing Vermont about $25.6 million annually.

Thanks for reporting an error with the story, "Progressive lawmakers demand that administration shelve tax credit cu..."