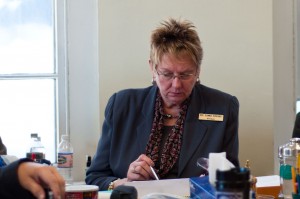 The House and Senate chairs of the Government Operations committees want more transparency in state government.

Both longtime House Chair Donna Sweaney, D- Windsor, and Senate Chair Jeanette White, D-Putney, gave the openness of the Shumlin administration a fair rating, but said they would like to continue clarifying the law around open meetings and public records.

“Transparency is a goal that they’re working toward, and I think he [Shumlin] has been working hard towards that goal,” said Sweaney.

Vermont consistently scores low on national transparency rankings, receiving a D- from the U.S. Public Interest Research Group for fiscal transparency last year, and a D+ on overall state accountability from a report done by the Center for Public Integrity.

“I don’t know that we’re not transparent,” said White. “I think that his administration is pretty open; I haven’t had any issues with that.”

Neither Sweaney nor White thought that the state’s 200-plus exemptions for public records requests were too extensive, but both want to re-examine how exemptions become law.

Currently, the government operations committees do not review exemptions. They hope to ensure that every time legislation adds an exemption to public records statute, the proposal passes through their committees.

“I wouldn’t say that there are too many exemptions, but they certainly could be managed much better,” said Sweaney, who has chaired the committee for eight years. “And when an exemption comes along that no longer makes sense or even is needed, they still kind of hang on forever. That needs to change.”

The last controversial exemption to the state’s public records law made it into the news late last year, as legislators decided to keep the locations of medical marijuana dispensaries confidential. Maintaining the secrecy of their locations proved troublesome, though, since the zoning permits dispensaries require are clearly public information, said Sweaney.

The two chairs will examine that topic with the Judiciary committees, which will take the lead on any legislation, said Sweaney.

White said moving toward a federal standard for access to police investigations sounded “reasonable” to her at first blush, but she hasn’t taken a firm stand on whether to support the governor’s proposal.

Another major issue for White is a comprehensive review of the state’s election law. Although legislators usually look at elections law piecemeal, prompted by the problems of the most recent election, this year White wants to tackle it all in one broad sweep.

White said she’d like to look at campaign spending and donation limits, and campaign finance definitions. She supports making super PACs “more transparent and accountable,” but wouldn’t offer many specifics.

Secretary of State Jim Condos has recently proposed subjecting super PACs to stricter disclosure standards, a call echoed by good government advocates and others in the wake of the 2012 election.

“If we need to make changes, let’s make them all at once, and hopefully be done with it for a while, instead of this little tweaking every couple of years,” said White of her ambitious effort to review Vermont’s election proceedings.

Sweaney said the committees would wrap up work from last year, reviewing the state’s search and rescue protocol. A recent report from a summer study committee says that there should be greater collaboration among public safety officials in search and rescue efforts, but that state police should still largely oversee the process.

Reviews of search and rescue procedures were prompted last year after the death of 19-year-old hiker Levi Duclos, who died while hiking in Ripton after search efforts were delayed.

Preventing municipal embezzlement, examining the state’s major information technology purchases, and reviewing Shumlin’s proposal to forfeit state pensions for fraudsters and embezzlers were other topics of interest for the two chairs.

The Government Operations committees have broad oversight of state government, covering topics ranging from election law to retirement benefits for state employees. Last year the committees tackled redistricting, the redrawing of electoral maps for state legislative seats, which happens once a decade.

Thanks for reporting an error with the story, "Legislative preview: Government Operations chairs tackle transparency..."