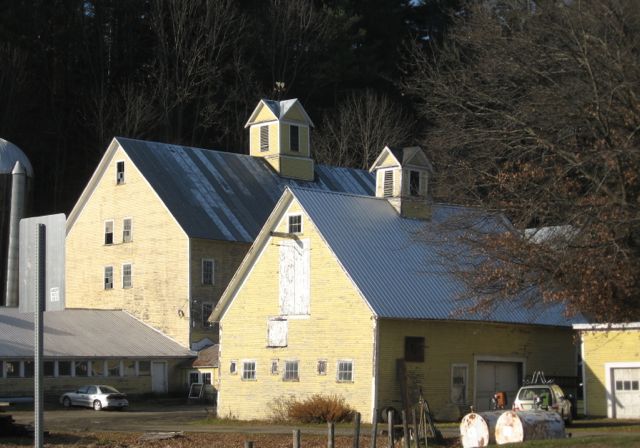 Although they need a new coat of yellow paint, the big barns on the LeMax Farm are as striking today as they were the day Arthur Rothstein stopped to photograph them in 1936. Photo by Nancy Price Graff

Arthur Rothstein was supposed to be in New Hampshire taking photographs of logging activity for the Historical Section of the Farm Security Administration. But there he was on a cold February day in 1936 in North Hartland, Vt., playing hooky, admiring a four-story bank barn swathed in pristine snow and set against a flawless blue sky.

In the image he captured, the angles of the various additions to the barn catch the mosaic of sun and shadow, freezing them into a patchwork of intersecting planes. The values in the black-and-white picture vary from the darkest dark beneath the ground floor bank on the barn’s east side to the blinding white of the south-facing main roof.

No person or footprint breaks the carpet of snow. This photograph became many things in the years ahead, but it is also a picture of silence made visible.

Rothstein’s print of the barn and other images of Vermont he took reached the desk of Roy Stryker, Rothstein’s boss in Washington, D.C., and Stryker was delighted by what he saw.

Stryker was the director of the Historical Section, a division of the Farm Security Administration, which was charged with recording visually projects that had been undertaken by President Franklin Roosevelt’s Resettlement Administration. Millions of Americans suffering through the Great Depression were at last finding jobs in FDR’s work programs, and this was true of photographers, painters, sculptors, and musicians as well.

A dozen or so gifted photographers were hired by Stryker to photograph the government’s work and its clients. And the final archive—a collection of roughly 270,000 images, taken between 1935 and 1943—resides at the Library of Congress today. It is the largest visual arts project documenting the American scene ever undertaken by the federal government.

Approximately 1,700 of the photographs in the FSA archive are of Vermont and Vermonters, images shot by eight photographers who made a total of nine trips to the state during those years.  Rothstein, whose image of the barn in North Hartland is in that collection, was Stryker’s first hire, a city kid, age 21, barely out of Columbia University. 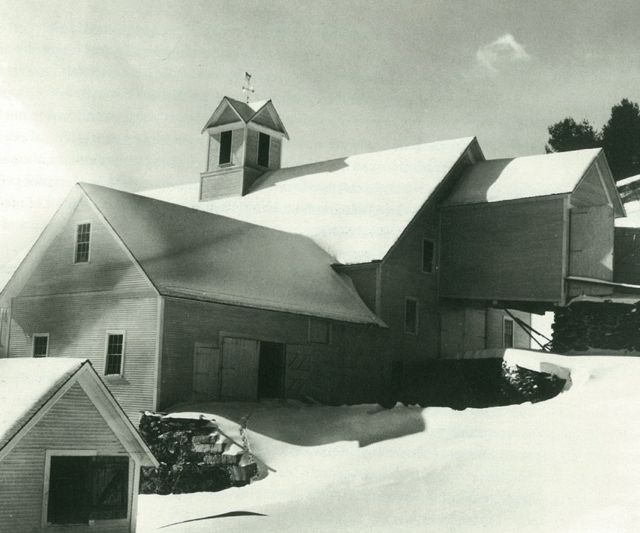 For many years, the caption for Rothstein’s stunning photograph read “Windsor County, New Hampshire,” which meant it was often overlooked, but that error has since been corrected. In 1973 Roy Stryker compiled a book showcasing his favorite images taken by the photographers who worked for him, and Rothstein’s picture of the North Hartland barn made the cut.

Today Ed and Kelly Meacham own and work that farm with their grown son and his wife, but this sprawling complex of barns, milking parlors, house, tie barn, farmstand, and silos is still known in the Upper Valley as the LeMax Farm, for Lesle Maxfield, who moved his growing family off their small Tunbridge farm to this bigger one in 1947.

The Meachams bought it half a century later from Louis Maxfield, Lesle’s son, who farmed these several hundred acres for 50 years, decade by decade buying out the shares of the rest of his family. At one time he had 100 milkers, but the farm’s fame came from its world class breeding stock and Maxfield’s years of work in Holstein associations helping to set standards for the breed.

“I really wanted to grow something of a family farm heritage, but that didn’t work out,” Maxfield says in a youthful voice that belies his 84 years. His sons had other plans for their lives.

After the Meachams showed an interest in the dairy farm and put in four years of hard work to learn its ways, Maxfield sold it to them. He now winters in Florida, but he lives nearby during the rest of the year. He still shows up on the Meacham’s doorstep to lend whatever help he can.

Maxfield and the Meachams speak so affectionately of each other that it’s hard to imagine that Maxfield even bothers to knock before he comes through the door.

Out front on Route 5, a sign reads “LeMax Farm,” a name that, of course, was acquired after Rothstein’s visit. The farm was originally known as the “Miller Farm.”

“They were probably raising sheep way back then,” says Ed Meacham, a large, soft-spoken man who now milks 85 cows. He is referring to the time, 150 years ago, when Robert Dexter Miller, a congregational minister, owned the land, served a local church, and kept his faith despite burying five of his six children.

Somehow generations of Millers hung on to the farm until the Maxfields took over. Around 1893 the Millers were prospering enough in the burgeoning New England dairy market to build this spectacular barn, and a little more than a decade later, they built a Victorian house close to the road, where the Meachams now live.

Everett Miller, the last of his family to own the farm, was likely the farmer who walked out to greet Arthur Rothstein when he set up his tripod and box camera.

Meacham is not the least bit surprised that someone would be interested in the history of his barn. People have been stopping to admire it for decades.

“Quite a few people stop and take pictures,” he says.

His dining room is a virtual shrine to the barn. The walls are covered with paintings of the barn and photographs that have been taken over the years by visitors. Every year students from Vermont Technical College in Randolph visit the farm to study its construction. Students from Hartford High School come by each year, too.

“Just imagine the amount of wood that went into that,” says Meacham in awe as he turns to scan the barn from bottom to top. “What was it like to haul up those rafters?”

This barn is four stories high. It has an enclosed bridge, stone supporting walls, and three entrance ramps. It was built to accommodate larger herds of cows that reflected the surge in the state’s dairy industry in the latter 19th century as refrigerated rail cars began carrying butter and, later, milk to Boston.

The barn is supported by a web of massive beams, each about a foot square, strong enough to have once held some 16,000 bales of hay.

Underfoot, overhead, and protruding from every nook and cranny, there’s still hay, some of it decades old. The air is full of it; motes of it swarm like no-see’ums in the sunlight that floods through the windows. Most is baled and stacked. Dinner for the current bovine residents.

Rothstein’s photograph, meanwhile, has become an icon in the history of photography, an image that transcends a utilitarian record, one that has become art.

In 2008 the Council on the Future of Vermont in a survey asked the state’s residents what Vermont values and traditions they would like to keep.

“Ninety-nine percent of Vermonters wanted to preserve the working landscape,” says Eric Gilbertson, field services representative for the Preservation Trust. Although the barn that caught Arthur Rothstein’s eye that day in February 1936 could easily be dismissed as obsolete in light of modern dairy practices, it still serves a purpose. Gilbertson calls it a cherished “physical record of Vermont’s working landscape.”

Maxfield’s connection to the magnificent structure goes beyond history and his years of mucking out stalls. His ties are deeply personal. “That farm naturally became a part of me. And I was part of it. And still am.”

Nancy Price Graff is a Montpelier freelance writer and editor.

Thanks for reporting an error with the story, "In This State: Hartland barn, an icon of WPA photography, survives"