Vermont is experiencing the most severe outbreak of pertussis, or whooping cough, in documented history. While state numbers show the vaccine’s inefficacy in the Green Mountain State, top health officials say there’s no better solution.

The 568 cases the state has so far recorded this year are double the previous high of 283 cases set in 1997.

To address the situation, the Department of Health administered more than 3,200 TDaP — or tetanus, diphtheria and acellular pertussis — vaccinations for free on Wednesday, and the state is encouraging all Vermonters to get vaccinated. The outbreak has also rekindled a passionate debate over how to best address immunization and whether legislation mandating vaccines in school-aged children is necessary.

“The vaccination is the best way we have in public health to protect pertussis,” said Patsy Kelso, state epidemiologist.

But the pertussis vaccination is also one of the least effective immunization regimens that is commonly prescribed. According to the CDC, the TDaP vaccination protects seven out of 10 people, and the DTaP — diphtheria, tetanus and acellular pertussis — vaccination used on children has an efficacy rate of 80 percent to 90 percent during and after the five-shot process. After five years, the CDC estimates the efficacy rate drops to 70 percent.

A New England Journal of Medicine study found that a child’s chance of contracting pertussis increases 42 percent every year after the fifth dose. The Journal of the American Medical Association conducted similar research and came to the same conclusion: The DTaP vaccination wanes in efficacy.

In August, the state found that 90 percent of 178 Vermont kids between the ages of six months and 18 years who contracted pertussis had received at least one dose of the vaccination. About 80 percent of those children had received five or six doses.

Since then, the state has not recorded how many people who have contracted pertussis were vaccinated, and the state doesn’t plan to use these numbers to make policy.

“We know that pertussis can occur in vaccinated people, and our efforts are focused on increasing vaccination rates and tracking cases,” said Kelso. “Whether a case was vaccinated or not wouldn’t change anything we’re doing.” 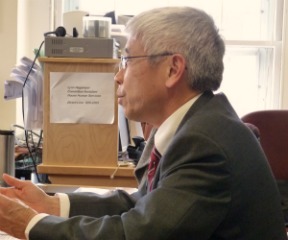 Commissioner of the Department of Health Harry Chen said that although the vaccination has a lower efficacy rate than others, it still provides a higher level of protection to communities and can help mitigate the effects of pertussis if contracted.

“There’s no perfect vaccine, but it is the best thing we have to prevent pertussis,” he said. “So, even if after nine or 10 years it’s only (70 to) 80 percent effective, it’s still the best we have. Certainly the CDC will look at new vaccines. But, until then, our best strategy is to get everyone vaccinated.” 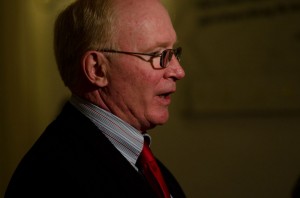 “We are seeing firsthand what happens when parents don’t immunize their children,” he wrote. “It’s a danger not only to the child, but also to the community at large.”

Last year, Mullin spearheaded legislation that called for mandatory child vaccinations in public schools with no philosophical exemptions. It passed in the Senate but failed to pass in the House.

Asked if he would take a stab at a similar bill this year, Mullin said only if the House would move on it.

That, however, is not likely to happen.

“I know his views on this, and I don’t personally disagree,”said Rep. Michael Fisher, chair of the House Health Care Commttee, about Mullin’s stance. “I don’t think he and I are far apart in terms of policy. But my response is that we just addressed this area of law last year, and I believe we need to give it time to work before making further adjustments. It is not on my agenda to take up immunization bill issues this year.”

Chen said he is in support of last year’s bill, but isn’t going to dwell on its disapproval in the House.

“While I absolutely agree with the policy around mandating vaccinations, I personally feel like we can improve more by concentrating our efforts on (people who) aren’t quite up to date (on their vaccines) but want to get up to date and provide better education to parents,” he said.

Chen is working with a task force to draw up a report due to legislators next month that will address ways of dealing with children who can’t be vaccinated due to underlying diseases or have health issues that make them more vulnerable to contracting certain diseases. Two recommendations that could come out of that report, he said, are to put such children in classes or schools with higher immunization rates and to require teachers and staff to be fully vaccinated.

Thanks for reporting an error with the story, "Pertussis outbreak has state encouraging vaccinations for adults and ..."