Vermont Law School is making its first steps toward an ambitious reorganization in the face of a $3.3 million budget deficit come July.

Two weeks ago it offered voluntary retirement packages to 98 staff employees.The school may offer similar voluntary buyouts to its 61 full-time faculty members, though it hasn’t done so yet. It will also overhaul its curriculum, cutting some programs and expanding others. 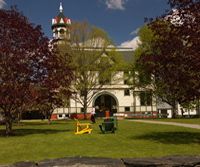 School administrators also can’t rule out mandatory employee layoffs next year, though those decisions will only be finalized in the spring, said John Cramer, the school’s associate director of media relations.

Cramer couldn’t say how many of the school’s 159 employees, along with its 76 part-time adjunct professors, will remain because budget-cutting decisions are still being made.

Cramer said there’s no target amount administrators want to save via staff and faculty reductions because they are still discussing dozens of other ways to trim expenses and generate revenue.

“We’re not shrinking the faculty so much, or shrinking the size,” said Cramer. “We’re reorganizing, restructuring. Some programs we do will be going away. What will remain are what we feel are areas of growth and specialized strengths.”

“We’re not going to try to keep doing everything we did with fewer people,” he continued. “We’re going to stop doing some things and start doing other things.” Cramer cited a new master’s degree program in energy regulation and policy as an example, but couldn’t comment on which programs may be eliminated. “I think it’s prudent for us, and I think the faculty feels this way, to plan for a smaller residential JD component for the school. Will that remain the case? I don’t know; there have been so many fluctuations over the past two years,” Mihaly said.

Mihaly said distance learning, online learning, more work placements, and fewer traditional lectures are a part of his new educational vision. These reforms are necessary, he said, in light of lackluster hiring by top-name law firms, and the Internet’s impact on learning. “We may not have fewer teaching personnel, because we’re going to be needing to have more small classroom experiences.”

“The question is how we can do it with an economic model that works. We’ve got to take a leadership role in this,” Mihaly said. Since the school isn’t affiliated with the state or UVM, he said, it doesn’t have a “mothership” that can help cover budget deficits.

“It simply means that we have to face the issues now that other schools have to face in the next few years,” said Mihaly. He hailed VLS as a leader nationally because the school is willing to make curriculum and staff reforms quickly in response to national trends.

Since 2008, the law school has seen a 17 percent decrease in applications to its JD program. The 2010 class of entering JD students numbered 212, while the incoming class of 2011 had 151 students.

VLS’ current tuition rate for its JD program is $45,207 per year, according to Cramer. A 3 percent increase is planned for next year, with the increase tied to expected annual inflation rate of 2 percent to 3 percent.

Cheryl Hanna, who has served as a Vermont Law School professor since 1996, said that the South Royalton college is part of a national transformation in legal education, spurred by fewer law students, technological impacts on the profession, and changes in the sector’s job market. She called the school’s transformation of its curriculum and employee composition “forward-thinking” and “humane,” since generous voluntary retirement packages could potentially let some senior faculty retain ties to the school, although with lightened teaching loads.

Hanna contrasted this progressive approach with mandatory cuts at other law schools, such as the University of California at Hasting’s mandatory staff cuts last year.

“Law schools are not immune from having to run in ways that are economically efficient,” said Hanna. “We really have a responsibility to spend every tuition dollar carefully. With fewer students, we have to be a leaner, more efficient organization.”

Jerry Diamond, a former state attorney general and a school trustee until October, also attributed the VLS shakeup partly to a decline in student enrollment. A dismal job market, steep law school tuition fees and subsequent student debts reaching up to $150,000 or more account for the fall in enrollment, he said.

According to Bureau of Labor Statistics data, compiled by the state’s Department of Labor, the number of lawyers in Vermont has increased slightly from 2007, when there were 1,000 lawyers in the state, to 1,150 in 2011.

Median annual income for lawyers fell from $86,401 in 2007 to $81,090 in 2011. The statistics don’t include other occupations in the legal services industry, like judicial clerks or paralegals.

“The legal market in Vermont is tight, as it is everywhere,” said Rob Paolini, executive director of the Vermont Bar Association. “There are not a lot of jobs. … For many years there were many more graduates than there were legal jobs. That’s been true for the last few years.”

“I think people are feeling the pressure, investing hundreds of thousands of dollars in a legal education, and they may not be able to find a job when they’re done,” he said. “Vermont’s not isolated or insulated from those challenges, more than any other place.”

Paolini added that Vermont and much of New England is facing an aging population of practicing attorneys. He is brainstorming with Mihaly to devise ways to attract more young lawyers to the area.

Several professors at the school are optimistic about the changes, and supportive of Mihaly’s strategy. They say it as an appropriate response to wider national changes.

Don Kreis, a VLS associate professor, said fans of the school “should be reassured” by the overhaul. Kreis is lightening his teaching load at the school, to take a full-time public sector job. (He says his job switch had nothing to do with the changes at VLS.)

“I think he [Mihaly] very conservatively but appropriately prognosticates there could be as few as 150 students in the entering class starting this fall. I think it’s prudent to plan for a class that size; it clearly requires some adjustments at VLS,” said Kreis.

Kreis added that he didn’t expect the quality of teaching to change in the near or far future, as a result of the changes. “Everyone at Vermont Law School is an excellent teacher. If there are fewer excellent people, still, there will be enough excellent people to meet the teaching load.”

“We will weather this storm and emerge stronger than ever,” he said. “We’re not headed over any fiscal cliff. … Students and faculty are devoted to the mission of this place and we’ll pull together just like the communities after Irene.”

A law school critic and law professor at the University of Colorado, Paul Campos, sees potential reduced manpower at VLS as the first publicly acknowledged example, nationwide, of serious downsizing at a prominent law school, despite widespread conversation about that reality in recent years.

“I think we’re going to be seeing a lot of schools doing what Vermont is doing right now,” said Campos. “They’ve got to cut costs.” He said such measures were appropriate in light of national trends, adding that VLS’ status as an independent institution, not affiliated with the state or a public university, meant it had few options to help deal with budget problems. Campos also said that he expects some law schools in the country to close in coming years, if their cost-cutting measures can’t balance declining tuition revenues.

Thanks for reporting an error with the story, "Vermont Law School’s restructuring welcomed as prudent measure"

By Mike Dougherty and Erin Petenko

The Deeper Dig: Life and learning inside the Burlington Macy’s

Bruce Stevenson: Follow the science. But what Is science, anyway?

Felicia Kornbluh: We have gone back to the days before Roe v. Wade

From more than 1,000 Castleton alumni: An open letter to state colleges trustees

Jeffrey Reel: ‘Science’ is not some cosmic mistake by your Creator

Haslam and Hightower: Sen. Sanders, you can end the war on Yemen

Vermont’s legislative leaders call off plans to convene in October