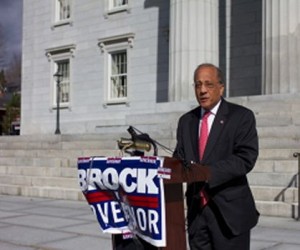 Randy Brock, the Republican candidate for governor, released public records to reporters on Thursday showing that Gov. Peter Shumlin spent about four months, or 119 days, out of Vermont during the 21 months of his first term.

The information was obtained from the governor’s office via a public records request from the Vermont Republican Party, said campaign manager Darcie Johnston.

“The ship of state demands a captain at the wheel at all times,” said Brock at the press conference on the Statehouse steps. “And Peter Shumlin has not been at the wheel … I want to be a full-time governor.”

The 119 days includes Shumlin’s time away on both public and personal business. The governor spent 76 days or nearly 11 weeks on non-official, personal and weekend travel combined. In February 2011, Shumlin went to the Caribbean island of Dominica. In July of that year and this past summer he travelled to his second home in Cape Breton, Nova Scotia.

A detailed breakdown provided by Brock’s campaign shows that 44 days were spent on official travel, attending to state business in places like Quebec and Washington, D.C., or with groups like the National Governors Association.

Security expenses for Vermont State Police officers who escorted the governor totaled about $28,670 in 2011, and $21,770 from January to September 2012. Total expenses amount to about $83,120 so far for the governor and staff on travel expenses, including security.

Shumlin describes himself as a workaholic. In an editorial meeting with VTDigger in late September, he said: “I’m kicking it seven days a week. People sometimes look at my calendar and say, look you had a half a day off on Sunday, and I say … I spent most of the day on the phone dealing with different policy issues and doing reading, things I should have done when I was running 16 hours a day like I do the rest of the week.”

MacLean said that the governor took two and a half weeks of vacation per year. His non-vacation time is made up of a mix of campaigning, including fundraising, time spent with the Democratic Governors Association and personal travel.

She didn’t know exactly how many days Shumlin had spent fundraising out of state, although Brock criticized Shumlin for taking three days in California to fundraise, while declining to engage in six debates held by interest groups and community organizations. He agreed to seven debates held by media organizations instead.

MacLean emphasized that Shumlin’s time on official business went toward improving “jobs and the economic opportunities” for Vermonters. She called the attack from Brock’s campaign a “desperate” campaign tactic.

Shumlin’s time away from the state is hard to put into context, as similar figures for former Govs. Howard Dean and Jim Douglas are not readily available. Douglas spent some time away from Vermont in his role as National Governors Association chair from 2009-2010.

Lt. Gov. Phil Scott, who’s had to cover for Shumlin as acting governor for almost 2,860 hours so far, hadn’t kept track of the time. “I don’t really have anything to base it on, whether that’s a large amount or whether that’s the normal,” he said.

“The governor’s schedule is hectic,” he continued. “A lot of times when the governor can’t be everywhere, when he’s tied up or busy, and someone else wants me to fill in, I’m happy to oblige. I haven’t felt that I’ve been overwhelmed.”

Brock says he is gaining according to internal poll

Brock wouldn’t release any details on the poll, arguing that the information remained proprietary and important to his future campaign strategy. He disclosed that Dresner, Wickers, and Associates, a California Republican consulting firm, conducted the poll.

Of the 10-point gap, said Brock: “We’ve got 26 days to close that gap, and we intend to do just that.” The poll comes after two political columnists last week declared the gubernatorial race virtually over, in Shumlin’s favor.

Shumlin campaign manager Alex MacLean said in the absence of further details: “It’s very hard to take pieces of a poll that the Brock campaign is peddling to reporters very seriously.”

Thanks for reporting an error with the story, "Brock: Records show Shumlin was out-of-state for four out of 21 month..."