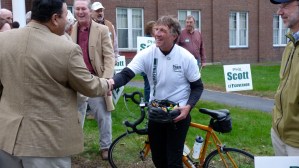 That’s been Lt. Gov Phil Scott’s unofficial campaign slogan as he traversed the state on bicycle. Scott, who races cars at Thunder Road, logged 568 miles passing through each of Vermont’s 14 counties. The eight-day trip, which concluded Tuesday evening in Barre, included both scheduled meet & greets and spontaneous conversations with constituents.

Even on two wheels, Scott was still too fast for one woman — on his way into Woodstock, the octogenarian flagged him down from the side of the road to hand deliver an eight-page letter outlining her concerns about rising fuel costs.

The woman told Scott she had been trying to catch up with him since North Troy, which is 125 miles north of Woodstock.

“I was taken aback a little bit that somebody would know who I was — I was all alone and had a raincoat on — but I was very grateful that she had taken the time to talk with me,” Scott said.

Scott started his ride in the Northeast Kingdom, where he got an up-close view of controversial wind turbines (Scott supports a moratorium to study the effects of industrial wind development) and finished in Barre, where a crowd of sign-carrying supporters greeted him. His recent stops included the Hartford Chamber of Commerce, Gifford Medical Center in Randolph and the Coolidge Homestead in Plymouth (Calvin Coolidge is one of Scott’s favorite politicians).

Scott admits that there was a moment, three miles into the ride, when he second-guessed the decision to make his campaign rounds using a markedly slow mode of transportation. He fell while crossing a set of railroad tracks in St. Johnsbury and cracked his helmet but he said his doubts dissipated during the remaining 565 miles.

“It was a little iffy there at the beginning, but it was all downhill from there, so to speak.”

Scott says the high point of the trip coincided with the first time the sun appeared.

“I was on Route 133 out of Rutland going through Ira and down to Dorset. The surface was incredible, the views were breathtaking, and it was just quintessential Vermont.”

Thanks for reporting an error with the story, "Scott finishes campaign cycle"