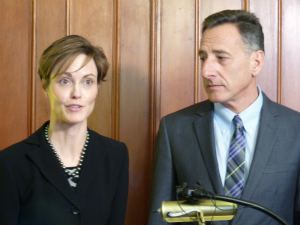 Elizabeth Miller, the commissioner of the Department of Public Service, and Gov. Peter Shumlin.

The Shumlin administration is reassessing how regulators involve the public in the permitting process for electricity projects.

On Tuesday, Gov. Peter Shumlin issued an executive order to form a five-person commission charged with evaluating and proposing ways to streamline the state’s permitting process for commercial energy generators and exploring how to better incorporate public participation into that process.

According to Elizabeth Miller, commissioner of the department of public service, the Governor’s Energy Generation Siting Policy Commission was formed to update an outdated model of permitting energy generators.

She said that while the annual number of applicants for such permits has more than doubled over the past decade, rising from seven in 2001 to 17 in 2011, the permitting process has remained the same.

Furthermore, she said, numerous public officials, citizens and company representatives have complained that the process is lengthy, disjointed and lacks public participation. During an interview with VTDigger last week, gubernatorial candidate Randy Brock made the same complaint, adding that if he were governor he would centralize the permitting process.

Gabrielle Stevens, director of Renewable Energy Vermont, issued a statement on Wednesday that said she was “cautiously optimistic” the commission could improve the process.

“Vermont is one of the few states that has a permitting process with no end-date, resulting in projects that have taken years for approval,” she added.

The five commissioners appointed by Miller will assess the state’s process, analyze how other New England states process energy permits and propose recommendations for improving Vermont’s system. To do that, the commission is being asked to prepare a report that should explore such items as alternative dispute resolution, applied standards, public approval processes, methods for monitoring environmental impacts and permit coordination.

Miller said that while Vermont courts employ such measures as alternative dispute resolutions, Vermont’s Public Service Board — charged with issuing permits to energy generators — does not.

The report is due to the governor and several legislative committees by April 30, 2013.

The commissioners may elect a chair to lead the group, and Miller expects them to meet for the first time by the end of October. She said they will receive a reimbursement for mileage and per diem for their time, but did not know the exact amount of the per diem on Wednesday. She and Deborah Markowitz, secretary of the Agency of Natural Resources (ANR), are “ex officio” members of the commission.

Thanks for reporting an error with the story, "Shumlin administration forms commission to assess siting process for ..."