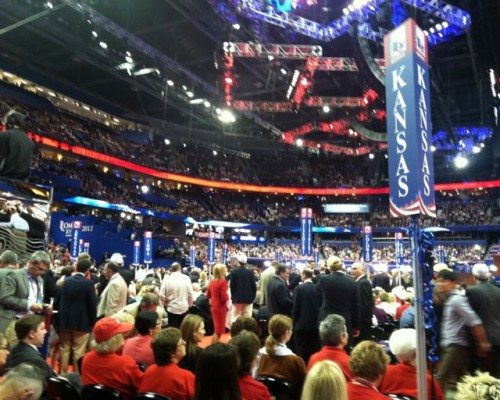 The view from the Vermont seats at the Republican National Convention. Courtesy photo by Craig Bensen.

This year Vermont GOPers played an active, if minor, role in the proceedings, thanks to the promotion of one of their members.

Vermont Republican state chair Jack Lindley was an assistant parliamentarian and a credentials committeeman, a position gained through his experience and his relationship with national Republican Chairman Reince Priebus (who he’s known since February).

As a parliamentarian, Lindley debated technical internal rules governing the convention and its complicated delegation system.

Some people enjoy learning about and manipulating arcane rules and some don’t, remarked Lindley dryly in an interview from Tampa.

“You don’t want it to get out of control, let’s put it that way,” Lindley said. “There are a lot of arguments going on, arguments in the weeds, which nobody can understand.”

He cited a compromise reached after much discussion, on a rule changing how delegates were bound to vote for candidates, including the presidential nominee, which Ron Paul supporters rejected. A contingent of “all-Paul delegates” from the state of Maine who used the rules to get into the convention were stripped of delegate slots by the RNC and replaced with Romney delegates, according to The Atlantic Monthly.

Meanwhile, Randy Brock, the Republican candidate for governor, has been busy networking, meeting “literally scores of people” every hour, giving media interviews, and meeting potential campaign donors. Although Brock reports scarce attendance of Vermont media, he’s having less trouble meeting potential campaign donors, ranging from those with a second home in Vermont or financial backers of the Republican Governor’s Association, to employees of national firms.

“It’s an opportunity to meet, shake hands, and talk about Vermont, Vermont issues,” said Brock. “I don’t expect to get a whole lot of money out of this frankly.” He joked he had not met the Koch brothers, of Koch Industries, and didn’t know if the controversial billionaire brothers were attending.

Part of the point of the convention is to solidify and approve the national party’s official platform. Although the platform represents official party positions nationally, Brock argued that it isn’t really that significant as a political document, especially for the average Vermonter.

“It represents the position in some cases of those so-called ‘base activists’, not really relevant to those of us here in Vermont,” said Brock, who added that Vermont Republicans have been an “independent breed” and a moderating influence on a more right-wing national party platform. “But some underlying issues in the platform, particularly the size and role of government, and the need to revitalize our economy, are things we’re in closer alignment on.”

The New York Times has compared how socially conservative the 2012 platform is, against the GOP platform in the 1980s, highlighting changes on issues like illegal immigration and abortion.

Craig Bensen, chairman of the Vermont Republican delegation, said that he couldn’t comment on the differences between the national and Vermont GOP stances on, say, abortion, because he hadn’t read the national party platform paragraph on that in detail.

But, added Bensen, “my view is that the two platforms are pretty much consistent. The national platform has a lot more pages and specifics, but the broad brush strokes are very similar.” He explained that Vermont Republicans also have a tradition whereby the state platform is not binding on statewide candidates or elected officials.

All three delegates described facets of the convention as “exciting,” “energizing” and “electrifying,” in various turns, especially the speeches by Paul Ryan and Condoleezza Rice. The convention includes about 4,400 delegates and alternates, along with about 15,000 members of the media, according to the RNC’s official website.

The role of the relatively small and uninfluential Vermont delegation at the massive convention is minimal. Brock described seating arrangements in previous years as “often a corner in the dark under the stairs,” alongside American Samoa and Guam, this year’s slot is next to Kansas and Hawaii.

“Either Vermont is going up, or Kansas and Hawaii are in real trouble,” observed Brock. Bensen added that Vermont doesn’t expect much for seating arrangements, which tend to depend on how red, blue, or swing the state is for the presidential election. “If you’re Vermont, you’ll have your privacy,” he said wryly. “We’re to the far right of the podium … you can’t be too much further off there and still be on the floor.”

As for why the RNC matters at all to the average Vermonter, Republican or otherwise, Brock said while the convention itself may not be meaningful, the outcome sets the direction of the presidential campaign and establishes strong contrasts between the Democratic and Republican presidential candidates, said Brock.

“Yes, there are people who right now in Vermont are disconnected,” he noted. “It may be early. But it’s less than 70 days before the General Election. It will become increasingly meaningful to people.”

The closing night of the convention Ted and Pat Oparowski of Randolph, Vt., talked about Romney’s relationship to their son who was dying of cancer when he served as their Mormon bishop in Boston. Read the Burlington Free Press story.

A top secret guest speaker, rumored to be the actor Clint Eastwood, was also on the slate last night. Lindley seemed adamant that the secret speaker was Eastwood, despite no official confirmation. It’ll be Clint Eastwood, he said. “Just watch.” (Eastwood did make an appearance, read the full text of his speech.)

Romney accepted the nomination to great fanfare and pledged to resolve the nation’s economic woes.

Thanks for reporting an error with the story, "Vermont delegates play role in “electrifying” Republican ..."