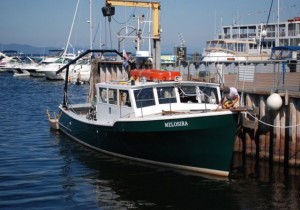 Greg Druschel doesn’t recommend scuba diving in an algae bloom. First of all, visibility is 12 inches, “which can be disorienting,” said Druschel Thursday at a conference on climate change adaptation in the Lake Champlain Basin. “We use our lights and see these clumps or colonies of cyanobacteria that look like floating peas.”

He always rinses himself off afterward, but when asked if the algae stink, Druschel said, “My wife would tell you, yes.”

Druschel, a professor of geology at the University of Vermont, is studying what triggers algae blooms so that driving factors like soil erosion and phosphorus runoff can be managed effectively. Climate models predict that precipitation in Vermont will increase as a result of climate change. More rain and snow means more erosion and runoff — which could mean more algae.

But effective management in response to a rapidly changing environment is not likely given the current ways that government agencies, municipalities, and private landowners interact, said Christopher Koliba, an associate professor of community development and applied economics at the University of Vermont.

Druschel and Koliba are part of a network of scientists in the public and private sectors who are investigating how Vermont can adapt effectively to climate change. These scientists are funded through a program called Research on Adaptation to Climate Change (RACC) in the Lake Champlain Basin.

As part of RACC, scientists from every university and college in Vermont are collaborating to answer research questions related to how changes in precipitation will affect the lake, what our new normal conditions will be given various climate change scenarios, and how people will respond to environmental changes.

RACC received a $20 million grant for five years of research from the National Science Foundation. It is led by the Vermont Experimental Program to Stimulate Competitive Research (EPSCoR). The annual conference was held to showcase the accomplishments of the RACC program’s first year.

RACC researchers are focusing on the health of Lake Champlain because it is “the most economically important asset in Vermont,” said Judith Van Houten, the director of Vermont EPSCoR.

But the focus is not just on the lake, it’s the whole Lake Champlain Basin, because, Van Houten said, “You can’t just look at the lake, you have to look at the entire basin that feeds the lake.”

Arne Bomblies, an assistant professor of engineering at the University of Vermont, and his research team, are building mathematical models to simulate how changes in precipitation, temperature, land use, and flooding might affect each other and lake health in a warmer future.

Bomblies predicts that climate change could alter environmental conditions in ways that lead to what he calls a “new normal.” Conditions might not continue changing on the same trajectory; they may be bumped over a threshold into a new steady state.

One example Bomblies cited comes from rainforest clearing: Water evaporating from the leaves of rainforest trees condenses into clouds and then falls as rain. If you clear the trees, you reduce the rain, and it’s harder for the moisture-loving trees to grow back. This is unlikely in Vermont, where rain falls just fine without the help of trees, but these kinds of feedback loops between land and climate can result in changes that are unlikely to reverse.

For now, because the scientists spent the first year recruiting graduate students, planning and setting up equipment, results are sparse. But outcomes of the research, in addition to a much more thorough understanding of algae blooms and recommendations for strengthening Vermont’s decision-making networks, will include models that can predict the effects of flooding, fine-scale climate forecasts, and analyses of how policies can effectively bring about change.

Bomblies wants to discover what the possible “new normals” might be like. The models his team develops will eventually enable land managers to determine how their land management decisions will affect the entire Lake Champlain Basin.

But what makes RACC more than just a biological research program is its focus on people.

“It’s people who are going to drive the future of the lake,” noted Van Houten.

Social science researchers like Koliba are studying how governing bodies — federal and state agencies, towns and even individual landowners — interact with each other. Koliba and his colleagues hope to use what they learn to help Vermont structure its decision-making and implementation in a way that can adapt quickly, effectively, and robustly to the effects of climate change.

For now, because the scientists spent the first year recruiting graduate students, planning and setting up equipment, results are sparse. But outcomes of the research, in addition to a much more thorough understanding of algae blooms and recommendations for strengthening Vermont’s decision-making networks, will include models that can predict the effects of flooding, fine-scale climate forecasts, and analyses of how policies can effectively bring about change.

The findings of biological scientists like Druschel, modeling whizzes like Bomblies, and social scientists like Koliba will then be integrated into a framework for understanding the way temperature, rain, algae, and people interact now and in the future in the Lake Champlain Basin. The University of Vermont’s Jon Erickson, a professor of ecological economics, will be doing this integrative work.

In spite of the heavy research focus, RACC involves education, too. In addition to science PhDs, high school and college students are involved in collecting and analyzing data.

Erickson suggested, “Think of it as a massive investment in capacity-building for state education and research.”

Lawrence Miller, the state Secretary of the Agency of Commerce and Community Development, who gave the opening talk, noted that investing in climate change adaptation and water quality is challenging when “We don’t necessarily know what the best investments to make are.”

But the results of RACC will enable the state to overcome those challenges, said Miller. “With these very significant investments that have very long-term impacts, to be able to make those well, to have the benefit of the modeling that is going to come out of this is incredibly important.”

Thanks for reporting an error with the story, "Scientists grapple with rapidly changing climate impacts on Lake Cham..."