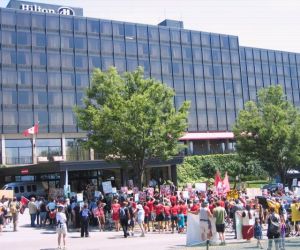 Protesters converge on the Hilton Hotel in Burlington. Photo by Greg Guma

Activists who say they were repeatedly shot with rubber pellets during a confrontation with police last Sunday at the Hilton Hotel have filed a public records request with the Burlington Police Department.

At a press briefing outside City Hall on Wednesday Jared Carter, managing attorney at the Vermont Community Law Center, said that both the community and the activists involved deserve answers to a series of important questions. “People I’ve spoken with involved in social and community organizing over the decades do not remember a time where a peaceful protest escalated to the point where it did on Sunday, where people were injured, where people were shot multiple times with rubber bullets,” Carter said.

Jonathan Leavitt, one of the organizers of protests coinciding with the 36th Annual Conference of New England Governors and Eastern Canadian Premiers, stood silently beside the lawyer for most of the press conference. In a prepared statement, however, Leavitt stated that he was “walking away with my hands up” when he was shot with rubber munitions that left 19 bruises.

“In light of the events Sunday Vermont needs to have a serious conversation about so-called ‘less-than-lethal’ munitions and protected First Amendment speech,” Leavitt said. Although Carter has not been retained to represent anyone, he advised Leavitt not to answer reporters’ questions. Carter added that he has spoken to three people who say they were shot, and has seen their various bruises.

Sandra Baird, an attorney on the Law Center’s board, said that the police response last Sunday differs from how Burlington has handled such civil disobedience in the past. “If they don’t move, they get arrested,” she explained. “In this case apparently more excessive steps were taken. In other protests, people were arrested, brought to court, and had a chance to answer the charges against them.”

On July 31, attorney Barry Kade sent a public records request to Burlington Police Chief Michael Schirling on behalf of the protesters, requesting information on the policy for use of “less-lethal” weapons, any incident reports generated after the Hilton incident, all communications between the local police department and both state and federal agencies about security for the conference, and whether any policy covers “the removal by uniformed police officers on name-tags or badges while on duty.”

“We would also like an inventory of all the non-lethal weapons that were used during the protest, as well as a description of the details of those weapons,” Carted added. The reason for this request is reports online that “some of these weapons were expired and should not have been used,” he said.

The confrontation began late Sunday afternoon, after several hours of peaceful protests in two city parks and the hotel driveway. About 500 people, many coming from Canada and other New England states, had gathered to voice their opposition to tar sands oil shipments and other regional development projects near the gathering of regional leaders.

After most activists left, a smaller group decided to block tour buses carrying people who were attending the conference. When the vehicles attempted to use a side entrance about 25 protesters stood in the driveway with banners. Riders on the bus snapped pictures while activists outside shouted “the whole world is watching,” a chant dating back to anti-Vietnam War protests at the 1968 Democratic National Convention.

After a few minutes, eight riot-clad police assembled in a row in front of a bus, with more nearby in reserve. The protesters were asked to move but did not initially comply. A few moments passed before the police began to advance, their shields up. The protesters slowly cleared a path.

Accounts differ from this point. Police claim they were provoked, protesters deny it. Videoclips and photos have circulated since Sunday, but the material available so far has not resolved all the questions. A police report of the incident said that some protesters “began pushing back” while others were on the ground with locked arms, but no video released thus far shows those moments.

The police report does say that “two officers discharged defensive munitions,” listing eight to 10 pepper balls, a sting ball round that projected several rubber “stingball pellets,” and pepper spray. Leavitt’s testimony about sustaining 19 bruises and the injuries seen by Carter raise questions about that estimate.

“The community and individuals involved deserve answers,” Carter said. “We won’t solve this problem with press releases and platitudes.” On the other hand, he said it is too early to talk about a potential lawsuit. “We’re nowhere near that state. We need to get to the bottom of what happened,” he said.

Baird noted that recent statements from the police suggest that charges could be brought against some protesters. Following up on that, Carter said that the request for records and dialogue represent “more of a defensive posture.”

Before speaking with the press on Wednesday Carter left a message about it at the mayor’s office, but had not yet spoken directly with any local officials. “We’ve begun to reach out,” he said. Mike Kanerick, assistant to Mayor Miro Weinberger, attended the press conference and took notes.

Carter also acknowledged that it is not yet clear who did what. “But the chilling effect it has on future activism in Vermont is important to recognize,” he added.

Previous court decisions have given the police authority to use force in some situations, “but not excessive force,”Carter explained. Asked whether that definition applied to this case, he responded carefully that the protesters were “not claiming that at this point.” However, he noted that the current video evidence does not show police being provoked.

“We have the individuals with their rights, and we have the unity of the community, which is equally important,” Carter continued. In some instances, “police are allowed to use force. We just don’t know whether that force (at the Hilton) was reasonable under the law.”

Leavitt was less conciliatory in his statement, accusing “powerful institutions” of violating the basic right to speak and assemble and, after the police response, attempting to “explain away the policy of firing upon their own Vermont citizens.”

Thanks for reporting an error with the story, "Protesters request public records on use of force at Burlington prote..."