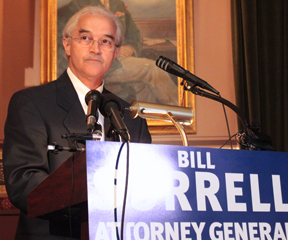 Attorney General Bill Sorrell addressed supporters at his official campaign launch in the Cedar Creek Room in the Statehouse May 30. VTD Photo/Taylor Dobbs

The two Democratic primary candidates for attorney general -- Bill Sorrell, the 65-year-old incumbent, and TJ Donovan, the 38-year-old upstart challenger -- don’t differ all that much politically. And so other factors, namely campaign organization, endorsements and a candidate’s ability to connect with the base matters -- a lot.

That’s why Vermont Democratic Party insiders and outside observers say Attorney General Bill Sorrell blew it on Saturday when he lost the state Democratic Committee endorsement.

Though he received support from the majority of state committee representatives, 16 ballots in all, the vote was short of the two-thirds majority (19 out of 28 votes) he needed to win.

Donovan was endorsed by the state committee in May.

The endorsement rule was not intended to be a vehicle for expressing displeasure with a candidate, Burgess said, but on Saturday that’s exactly how some members of the committee used it.

On the surface, their displeasure centered on two things, Burgess said: Sorrell failed to follow well-established committee protocols and his campaign had a mailing printed by a non-union shop. Burgess also said some were unhappy with his performance as attorney general.

“Peter Welch who was absolutely a foregone conclusion called me and called many other members and asked for our votes, but Bill Sorrell couldn’t do that?” Bear asked.

The attorney general not only didn’t call party officials in advance to ask for their votes, and he also didn’t file a 10-signature petition in time for the May meeting, Bear said, even though officials gave him a heads-up that Donovan had already submitted his petition. At the time, she said, Sorrell could have easily won co-endorsement.

The final blow? Sorrell didn’t show up for the state committee meeting in Montpelier on Saturday. Instead, he appeared in the Stars and Stripes parade in Lyndonville. His surrogates at the meeting in Montpelier, Janet Murnane, deputy attorney general, and his campaign manager Mike Pieciak attempted to explain why their boss was missing in action, but it wasn’t enough, and Murnane’s presence raised questions about the propriety of one of Sorrell’s employees campaigning on his behalf, Bear said.

It’s the first time in recent memory the state committee has not endorsed a candidate as a legitimate Democrat.

And so what should have been a routine endorsement turned into an official rejection of Sorrell.

In a voicemail message, Sorrell said he was pleased that he won a majority vote. “The minority chose not to determine that I’m a credible, legitimate Democratic candidate and I think that’s unfortunate,” Sorrell said.

“I’ve been elected seven times as a Democrat,” Sorrell said. “If I’m not being partisan enough for some, then I’m sorry, I don’t think that’s consistent with what my oath of office is. The administration of justice in an even handed way is important to me, and that’s what I’m going to continue to do. I’m looking forward to the last five weeks of the primary campaign. I have every expectation of being the Democratic nominee for attorney general in the November General Election.”

It’s the first time in recent memory the state committee has not endorsed a candidate as a legitimate Democrat. In fact, Burgess said it’s rare for committee members to vote against an incumbent. Three members dissented in the recent endorsement of Leahy because of his support for the Defense of Marriage Act; and one cast a ballot against Welch on Saturday. In 2010, the party supported all five Democratic candidates in the gubernatorial primary.

The Aug. 28 primary is expected to have low turnout of at most 40,000 voters. (In the last Democratic primary which featured a five-way gubernatorial race the turnout was roughly 70,000.)

Party officials who went directly from the state committee meeting in Montpelier to the Hamburger Summit, an annual bloggers’ fete in Burlington, were so moved by the turn of events that they began spontaneously writing about what happened at the party and churned out a story for Green Mountain Daily, a liberal blog, within a matter of minutes.

One of those bloggers, state Sen. Philip Baruth, D-Chittenden, said, “It had the feeling of a mini watershed moment."

“It wasn’t that anyone didn’t like Bill Sorrell, it was a palpable sense that a torch was about to be passed," Baruth said. "People are always looking for that kind moment to be energized. They see Donovan as young and exciting, but it’s also fact Bill Sorrell has been there a long time. I think he got comfortable in a way of not keeping his connections sharp and fresh with party people, and TJ came along and paid them the respect they were looking for. If you’re in office for 15 years and don’t have a serious challenge that’s one of the occupational hazards. The major thing, I would say, is that it’s reducible to the word change.”

Eric Davis, a retired professor emeritus of political science from Middlebury College and an assiduous scholar of Vermont politics, says while the press pays attention to the machinations of the party, Vermonters, who have weak party affiliations, likely don’t care whether the state Democratic committee endorses Sorrell or not. 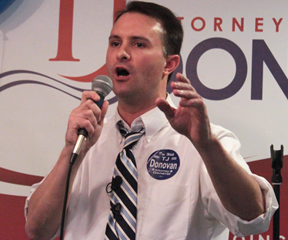 What’s more important is that it’s part of what’s developing as the narrative of the campaign, Davis said.

Sorrell was appointed to the job and never had a serious challenger in a primary or General Election in 15 years as attorney general, and Davis says as a result he has “has let his campaign skills atrophy.”

He was such a shoo-in for so many cycles, that he didn’t maintain his connection with voters and keep his political organization in place, Davis says. “He let all those things go by the wayside.”

Donovan, on the other hand, has been in competitive political races, is hungry for the job and his campaign got off to a fast start, according to Davis.

“Donovan used the spring to effectively line up endorsements, unions, officeholders not all whom are Democrats (David Zuckerman, a progressive, and several Republican mayors have endorsed him),” Davis said.

Davis says his sense is that Sorrell realized two weeks ago that Donovan might win, and so the incumbent started picking up the pace. He announced that he had Gov. Madeleine Kunin’s support, and he sent out a mailing with Gov. Howard Dean’s picture and then held a presser with Dean.

At this point, Davis is giving Donovan a slight edge over Sorrell, because the Chittenden County State’s Attorney has more money and more momentum.

Both candidates are urging voters to cast ballots early. In the last cycle 15 percent to 20 percent of voters submitted early ballots; and that percentage was higher -- 20 percent to 25 percent in the Burlington area and Central Vermont region, Davis said.

Thanks for reporting an error with the story, "Sorrell loses state Democratic committee endorsement"