Editor’s note: This feature is by Nancy Price Graff, an author, editor and freelance writer who lives in Montpelier. In This State is a syndicated weekly column about Vermont’s innovators, people, ideas and places. Details are at http://www.maplecornermedia.com/inthisstate/.

Two of the subjects of his Quarry Books series once regularly passed by his old white cape on Rte. 125 in East Middlebury. One of these chapbooks, roughly 10-page booklets, explores the life and views of Joseph Battell, proprietor of the Breadloaf Inn in nearby Ripton at the turn of the 20th century. Convinced that the modern age was going to the devil in a handbasket, Battell refused to ride in an automobile and donated Camel’s Hump, a family inheritance, to Vermont as a state park.

The other frequent traveler was Violet White, a librarian and professor at Middlebury College from 1933 to 1957 who is known, if she is known at all today, for her poetry and her nature journals.

For her, the longs walks she took daily were enriched with the possibility of discovering some natural gem—the cast of light on a fern, a rare wildflower—that would inspire her writing.

An extrovert in the woods and glens she frequented, White hid in corners at faculty receptions, too shy to mingle with her peers. One of her legacies to the college was the acquisition of part of Thoreau’s library from his time at Walden Pond. 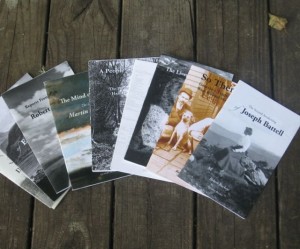 A selection of Robert Buckeye's chapbooks. Photo by Nancy Graff

Most Vermonters have never heard of Battell or White, despite their quietly extraordinary lives. That’s what captured Robert Buckeye’s interest and made them suitable subjects for his publishing company Amandla Books and its smaller imprint Quarry Books, whose offices are in a light-filled upstairs room in the back of that old cape. Although Battell and White also share a connection to Middlebury College, as do seven other subjects in Buckeye’s 10-part Quarry Books series that was not the most important criterion for inclusion in the series. Rather, Buckeye was drawn to the disparity between what Battell, White, and the others accomplished in their lifetimes and their relative obscurity today; that and their connections to Vermont.

“The Quarry Books subjects are not unknown,” says Buckeye, sitting on a leather couch in his office on a brilliant summer afternoon. “But they should be better known.”

A quotation from the writer Iain Sinclair that appears on the back of the first chapbook conveys Buckeye’s concern for the under appreciated in history: “The official map of the culture at any time would always fail to include vital features.” His interest here, Buckeye goes on to explain, is in those overlooked vital features.

A compact man at 74 with a light step, Buckeye is a soft-spoken scholar who hesitates in such a way when he speaks as if he were inventing language as he goes along. He started Amandla Publishing (which in Zulu means “power”) in 2001. The press has shared attention with his own writing, which includes two novels, since he retired in 2003 from his multiple positions at Middlebury College: curator of the Abernethy Collection of American Literature, archivist, head of Special Collections, and instructor in modern American literature. He had been at the college for more than 30 years, and he had held in his hands such items as Thoreau’s personal copy of Walden, annotated with the author’s notes, a book that Violet White had acquired while she was the college’s librarian years earlier.

In fact, the bibliographies at the end of the chapbooks are filled with titles that were in Buckeye’s keeping during his years overseeing those rarified collections — first editions, special editions, authors’ personal copies, titles that roar like thunder in our nation’s literary history. The subjects of the Quarry Books chapbooks are just 10 of many names that somehow surfaced from that wealth of material.

“I knew from the beginning who five or six of the subjects would be,” Buckeye says about the series, ”and I had dim senses about the others.”

It’s hard not to believe that there are hundreds, if not thousands, of other potential subjects hidden in those treasure troves of literature and history. But 10 chapbooks were all Buckeye planned when he started, and he is content with the completed set. To finance the project he solicited subscriptions. He attracted 26 of them from private collectors and research institutions such as Yale, Middlebury College, and the University of Vermont, and he sold individual copies in bookstores.  Every volume has sold at least 70 copies.

“Even though they paid for themselves, they occupy a difficult place in the marketplace. Even though they are scholarly, they are not scholarship,” Buckeye says. It is, in fact, a challenge to classify them. 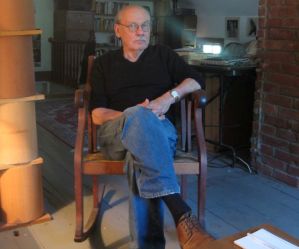 Nevertheless, the Quarry Books succeed in bringing to light noteworthy people who have languished in the shadows. They include, for example, the socialist poet Genevieve Taggard, who covered the West Rutland Marble Workers’ strike in 1936; Martin Freeman, a Middlebury graduate class of 1848 who became the first black man to be appointed president of a college in the United States and later became the disillusioned president of Liberia College in Liberia; and Edwin James, an 1816 graduate of Middlebury, a linguist, a surgeon, a botanist, an explorer, and one of the first western adventurers to decry the government’s abuse of Native Americans and the West’s natural resources. They all caught Buckeye’s attention as examples of occasional or full-time Vermonters who deserved in the greater scheme of things better than they have gotten.

“I have always been drawn to those on the margins,” says Buckeye, whose parents never went beyond sixth grade.

Neither biography nor history, each of the chapbooks is best described as an essay on human character. Readers will not necessarily learn when these people were born or died. Great gaps in their lives are unexamined, as in the essay on Hazel Dow Wood, a talented amateur photographer born in Middlebury who died at 96 in 1989. Without giving up many particulars about Wood’s outer life, he infers her sensitivity to the changing world around her from the subjects she photographed and her thrilling sense of discovery over this accessible medium.

Nor will readers find in the chapbooks any chauvinistic nod to Vermont’s influence on a subject’s life. It’s usually the other way around. Consider Samuel Dwight, the subject of the first chapbook. Dwight was an early immigrant to Vermont, a Yale graduate who by 1792 had failed at almost everything he tried. When an experimental school he was directing in Bennington collapsed that year, he turned to carving gravestones in and around Manchester to make a living. Readers will hardly remember the scant details of Dwight’s life, but they will appreciate his rejection of the Puritan’s view of death as all fire and brimstone. They will remember instead the smiling faces of his angels, their carved hearts, and the child-like stick figures that distinguish his art, each motif an expression of a profoundly different view of life and death.

All of the Quarry Books subjects alternate between being social insiders and outsiders because of their tendency to fly contrary to the prevailing worldview. Buckeye repeatedly likens them to a handful of 19th-century New England writers — Thoreau, Emerson, and Melville, in particular — whose fierce social and economic criticism, he says, continues to “energize” him as a writer and a scholar.

Combine his view of the world with his extraordinary contributions to the collection of American literature at Middlebury College, his long residence in Vermont, and his relative obscurity after a lifetime of writing and someone has a good candidate for an 11th subject for Quarry Books.

Nancy Graff of Montpelier is a freelance writer and editor. To find archived copies of In This State columns, check: http://www.maplecornermedia.com/inthisstate/archives.html

Thanks for reporting an error with the story, "In This State: Retired Middlebury college curator captures quiet but ..."

Dan DeWalt: How about a graceful exit for obsolete Democrats?