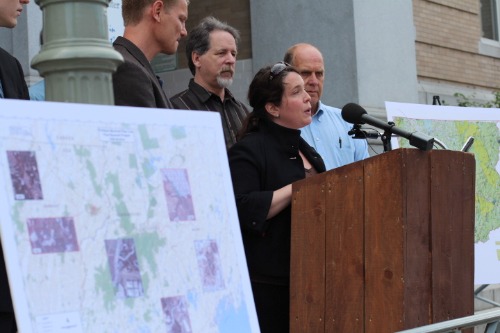 Editor’s note: A companion story to this piece, Will tar sands oil flow through Vermont?, by Craig Idlebrook, was published on VTDigger.org today.

Environmental groups released a report Tuesday criticizing what they say are plans to import tar sands oil from Alberta through Vermont and New Hampshire to Portland, Maine.

The report, “Going in Reverse: The Tar Sands Threat to Central Canada and New England,” highlights potential plans to reverse the flow of an oil pipeline from Montreal to Portland, where the oil could be exported.

The report, spearheaded by the Natural Resources Defense Council, notes that in May Enbridge Inc., Canada’s largest natural gas distributor, announced plans that confirmed a long-range goal to ship tar sands to Montreal. There are no official plans to ship that oil through New England to Portland.

But local environmental groups say they don’t want to wait until it is too late.

A coalition of environmental groups held a press conference Tuesday in front of Montpelier Cith Hall to bring attention to the looming issue.

“We are gathered here to shine a light on a likely plan in the works that we believe offers all risk and no reward to Vermont, to New England and to the nation,” said Johanna Miller, energy program director for the Vermont Natural Resources Council.

Groups like VNRC say transporting crude oil through the Portland-Montreal pipeline could increase the risk of an oil spill because tar sands oil is more corrosive than regular crude. The World War II-era pipeline saw a spill 35 years ago when oil leaked into Lake Memphremagog.

“It is likely to exacerbate corrosion of 62-year-old pipes and set the stage for disastrous oil spills for some of our most rural and beautiful places in the state,” Miller said.

The existing pipeline travels through Vermont’s Northeast Kingdom. Currently, it only transports oil east, from Portland to Montreal.

Environmentalists say the tar sands oil from Alberta is “the dirtiest oil on the planet.” They say it contains higher concentrations of hazardous materials and toxins compared to conventional oil, resulting in a more abrasive and corrosive material.

According to the report, Enbridge first floated the idea of reversing the flow of the pipeline in New England in 2008.

The report also highlights an oil spill in the Kalamazoo River in Michigan as a reason not to bring tar sands oil through the region.

The report calls for further studies of the pipeline plans as well as a push for policies in both Canada and the United States to reduce oil demand.

Enbridge is a part owner of Gaz Metro, the Canadian utility that will own a majority of Vermont’s electric distribution utilities as well as Vermont Gas Systems, the state’s natural gas utility when a merger between the state’s two largest utilities is finalized.

Thanks for reporting an error with the story, "Environmental groups push for preemptive halt to oil transit"