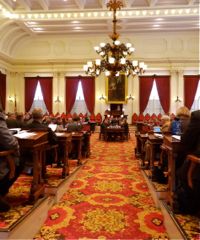 The House Chamber of the Vermont Statehouse. Photo by Ceilidh Galloway-Kane

The original version of the bill would have required utilities to purchase set amounts of renewable energy through a “renewable portfolio standard.” A few closed-door meetings later, the Senate version stripped that requirement and shuffled the bill through.

The energy bill’s puzzling track this year resulted in weeks of stalling in the Senate and ultimately a last-minute rush to passage on what could be the eve of adjournment.

The House actually passed the original bill with a renewable portfolio standard, mandating that utilities buy a set amount of “renewable” energy, twice. First it was House Bill 468. Then it was a strike-all of a bill on smart meters. Members of the House worried that the original bill would not move in the Senate.

Rep. Paul Ralston pushed Rep. Margaret Cheney, who reported the bill, on why her committee took such a strong turn on the bill.

Cheney is vice chair of the House Committee on Natural Resources and Energy. Her committee worked for a large part of the legislative session on the bill before accepting the last-minute shift.

“The major concerns were the cost impact of a renewable portfolio standard,” she said.

Cheney said the new bill requires a study of the impacts of a renewable portfolio standard and better ways to design it.

The Associated Industries of Vermont has lobbied persistently against the bill, citing the impact it will have on electric rates.

Gabrielle Stebbins, executive director of Renewable Energy Vermont, said the bill will still spur clean energy jobs in Vermont but it falls short of setting a long-term strategy for the state.

“Having an energy bill with a standard offer expansion would be good for small and community-scale projects,” she said.

Under a renewable portfolio standard, utilities would have to obtain “credits” for renewable energy, which they could trade among other utilities throughout the region. That approach, Stebbins said, would allow the state to tap into out-of-state renewable projects to fulfill that requirement.

While the energy bill survived, other legislation affecting how utilities would be able to recoup money invested in weatherization did not.

Rep. Oliver Olsen tried to introduce an amendment that would prohibit utilities from recovering in their customers’ rates efficiency measures that do not benefit the electric system.

House Speaker Shap Smith ruled the amendment not germane, and it appears dead for this session.

Olsen’s amendment was aimed at a merger between the state’s two largest utilities, Green Mountain Power and Central Vermont Public Service Corp. The utilities propose investing $21 million in windfall money they are required to share with ratepayers into efficiency measures, with $12 million going to weatherization.

Olsen’s amendment passed on a voice vote earlier this session, but the housekeeping bill he attached it to will likely die in the Senate.

Another move to prohibit the utilities from recovering the so-called “windfall” money in rates came as an amendment to the budget in the Senate. A conference committee stripped that provision.

“By the Speaker refusing to allow that to go forward, it’s clear what happened in both the House and the Senate really was political theater and that there was no intention of providing real relief to utility customers,” Olsen said.

The utilities are still awaiting approval from the Vermont Public Service Board of their merger. If the board accepts a memorandum of understanding between them and the Department of Public Service, the utilities will be able to invest the $21 million they are required to share with ratepayers in efficiency then get the money back in rates. The utilities claim that investment will result in $25 million in benefits to ratepayers. The windfall requirement originated in 2001, when the Public Service Board allowed utilities to raise rates as a result of bad contracts with Hydro-Quebec. In return, they had to share the windfall of a profitable merger with their ratepayers.

Thanks for reporting an error with the story, "Final energy bill passes, minus renewable portfolio standard"