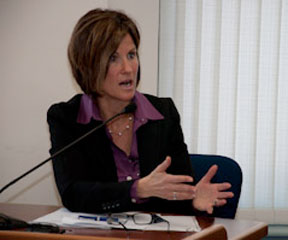 As lawmakers hotly debated last week whether they should have a say in the CVPS and Green Mountain Power merger, the quasi-judicial body that ultimately will decide whether to approve the marriage between the state’s two largest utilities held hearings on the deal.

The controversial merger case is now before the Vermont Public Service Board, and many of the same issues legislators have been exercised about over the last few weeks are undergoing deliberative scrutiny from the three-member panel.

Gaz Metro, based in Montreal, which owns Green Mountain Power and Vermont Gas, beat out rival Canadian company, Fortis, in a bid for CVPS in July 2011. If the merger is approved, eight in 10 Vermonters will get their electricity from Green Mountain Power.

While lawmakers made political hay out of the revelation that the $21 million owed to ratepayers for bailing out CVPS in 2007 would be paid for by raising rates, the board delved into the painstaking process of examining the merger deal in a series of hearings over the last several weeks.

More details of the complex financial arrangement have come to light as a result of the proceedings.

Here are a few of the findings from recent documents about the merger:

The Vermont Public Service Board has never before allowed a utility to recover an acquisition “premium” from merger savings that would ordinarily be passed on to consumers. If the three-member panel approves the arrangement, it would set new precedent, according to documents from the proceeding. The board says the utility would have to meet a heavy burden of proof to justify returning $82 million to the for-profit company from expected ratepayer savings.

In the past, the board has not allowed utilities to recover acquisition costs from ratepayers and 100 percent of merger savings have benefited customers. In its questions for Gaz Metro, the board says of the $82 million sharing proposal that it “has not previously approved any similar arrangement.”

This deal is different, company officials say: It is historic in nature because of its size and the potential benefits it offers for customers.

Green Mountain Power representatives wrote in a written response that the company’s offer would return 59 percent of the overall merger savings to consumers (net present value). Mary Powell, CEO of the utility, told the board in testimony last week that the sharing arrangements with ratepayers have been done in other jurisdictions and pointed out that the ratio is typically 50-50. The company’s offering, she said, is generous by comparison.

“I think this is a really strong value proposition for customers because not only are we proposing the 59/41, but again as I view what we’re proposing, you know, we’re taking all the risk and customers are taking none of the risk,” Powell told the board. “We’ve guaranteed. We have guarantees in the first few years of savings for customers.”

GMP officials argued in writing that the board should “follow the precedent of other jurisdictions” and approve the plan. One of those out-of-state precedents Green Mountain Power used as an example in expert testimony was the largest utility merger in U.S. history, involving Entergy Corp. and Gulf States Utilities in Texas.

In a response to written questions from the board, Gaz Metro officials said they were committed to not pursuing “a more customary Wall Street-style merger, in which increased returns for shareholders are obtained through layoffs and accelerated consolidation of facilities and systems, at the expense of customer service impacts. It is also important to remember that in non-utility mergers, shareholders would expect 100 percent of synergy savings.”

Under Vermont law, utility companies are strictly regulated and must show regulators they are operating in the public interest.

The board asks why it should make an exception for Gaz Metro and deviate from its precedent in order to approve the arrangement “considering, among other things, the effect such precedent might have on future rate-making proceedings involving any utility.”

The answer? Gaz Metro says “the proposal is consistent with precedent, including Vermont precedent.”

The board has approved three recent acquisition cases, involving the recent CVPS acquisition of the Readsboro and OMYA/Marble Valley power companies and the 1997 NYNEX/Bell merger, in which all benefits from the transactions accrued to the ratepayers.

In the Readsboro case, the board told CVPS the facts “do not support a deviation from longstanding Board precedent to exclude acquisition premiums from rates.”

The NYNEX/Bell merger savings over a three-year period were expected to run between $850 million to $900 million nationwide. Vermont customers were to receive $4.3 million in savings, and according to a summary of the merger from Westlaw, all of those savings were required to flow to ratepayers.

Gaz Metro paid a $62 million premium to buy Green Mountain Power in 2007. The acquisition cost, as in the cases cited above, was not recouped in rates, according to a lawyer familiar with the case.

A breakdown of the $226 million savings

Under the original merger plan, ratepayers wouldn’t have seen any of the $144 million in savings until year seven. The Vermont Department of Public Service pressed for more money up front for ratepayers, and agreed, in a recent memorandum of understanding, to a guarantee from the utility of $2.5 million in savings in year one; $5 million in year two; and $8 million in year three. Half of the savings would be made available between years four and eight, and 100 percent in year nine and 10. After that, the savings would continue “forever into the future,” according to Dotty Schnure, communications director for Green Mountain Power.

The ratepayer savings of $144 million would be divided between Green Mountain Power and CVPS customers. Based on VTDigger calculations derived from the number of ratepayers and the per customer “net present value,” more than half of the reduction in rate increases over a 10-year period would go to CVPS ratepayers.

If savings are distributed proportionally to the distribution of net present value to a typical residential customer, then CVPS ratepayers will see $70.5 million in savings over 10 years, according to VTDigger.org calculations. The windfall sharing agreement is $21 million. Figures for the net present value of the $144 million in savings were not available at press time.

Rep. Cynthia Browning, D-Arlington, has proposed an amendment that would force the company to issue a cash payback of the $21 million owed to residential customers for the bailout of CVPS in the early 2000s. She says the full value of the bailout was $98 million, and CVPS shareholders have retained the other $77 million.

“Green Mountain Power has told the Public Service Board that the net present discounted value of those savings for an individual CVPS customer will be about $167, total,” Browning wrote in a comment on VTDigger. “That doesn’t sound as good as $144m does it? And it makes the residential bailout payback of $76, which has been so sneered at as inconsequential, look a little better.”

Browning alleges that using ratepayer money to fund investments is “business as usual for Gaz Metro.” She points to the Vermont Gas proposal to expand a pipeline into Addison County as another example. The Public Service Board recently approved the rate setting mechanism for Vermont Gas, which is also owned by Gaz Metro.

“That cost shift is how they are financing the natural gas pipeline: raising rates so that customers pay for the investment, then charging them higher rates after it is built,” Browning wrote.

Board members also questioned key players in the merger about whether returning the $21 million windfall directly to ratepayers is a deal breaker. They also wanted to know who’s responsible for repaying customers — shareholders or the purchaser. Both Gaz Metro and CVPS say the purchaser must pay for the windfall. AARP, an intervenor in the case on behalf of ratepayers over 50, says both companies knew about the obligation, which included the possibility of a direct payout.

The big question is: Would Gaz Metro have grounds to back out of the deal if the merger is conditioned on a cash payment of the $21 million or changes to the 10-year saving plan?

Larry Reilly, the CEO of CVPS, testified that the implementation of a 2001 Public Service Board order was baked in to the CVPS Green Mountain Power merger deal from the beginning. He said the windfall was assumed in the purchase price and had Gaz Metro not agreed to compensate ratepayers in some fashion, the pricetag would have been $21 million higher.

In Reilly’s estimation, the implementation of the order would likely not have a adverse material impact on the deal, though it could lead to delays and litigation.

Powell has maintained that a payback would kill the deal.

Elizabeth Miller, commissioner of the Department of Public Service, told the board under cross examination by Jim Dumont, a lawyer for AARP, that she was not aware that implementation of the sharing order would not have a material adverse effect on the merger agreement. Miller made her comments on April 4; the state agreed to a memorandum of understanding with Green Mountain Power regarding the use of the $21 million for weatherization and energy efficiency programs in March.

In his testimony before the board, Reilly explained how the order was originally included in the contract with Fortis, the original CVPS buyer. Gaz Metro had offered more money for the company, but it included a “regulatory out” clause that CVPS thought was too onerous and could scuttle the deal because if regulators didn’t accept the contract “as-is,” Gaz Metro could walk away. The company sweetened its bid by removing that language and proposing $144 million in savings.

Thanks for reporting an error with the story, "Gaz Metro to recover CVPS acquisition costs through ratepayer savings"