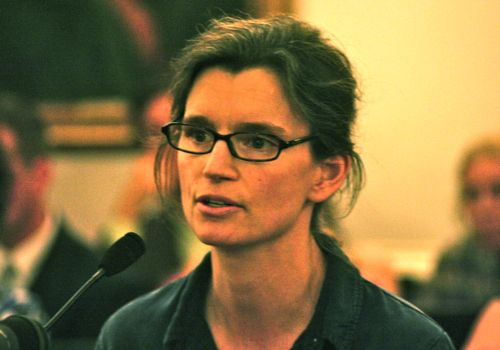 The House Committee on Health Care got a dose of conflicting testimony Wednesday night on the merits of taking away a philosophical exemption for parents who don’t want to have their children immunized.

The Senate passed a bill that would eliminate the exemption earlier this month. Now S.199 is in the House. If the measure is enacted, parents would have to get their children vaccinated to enroll them in school, absent an exemption on religious or medical grounds.

Proponents of the bill emphasize the risks to public health of unimmunized children. The Vermont Department of Health and other groups such as the Vermont Public Health Association support the bill introduced by Sen. Kevin Mullin. Rep. George Till, a medical doctor who sits on the House Committee on Health Care, introduced similar legislation.

“Immunization is the single most important thing that has helped prevent serious disease in this country,” said Ken Borie, a family doctor from Randolph.

Many young parents have little perspective on the dangers of diseases like measles and polio that killed thousands, Borie said.

Those who want to keep the exemption say the number of unimmunized children in Vermont is not as high as some would like people to think, and there is a trend toward over-vaccination.

Julia McDaniel, a chiropractor who opposes the bill, said the proposal goes too far.

“The question I want the committee to consider is when is it appropriate for the state to take away an individual’s rights,” McDaniel said.

She and others emphasize that the state is in the 90th percentile for vaccination rates for vaccines other than chicken pox.

“Do we want to take away an individual’s rights over chicken pox?” she said.

McDaniel said taking away the philosophical exemption would mean many children would not be allowed to enroll in school.

“If a child is even missing so much as one booster shot, they are counted as unvaccinated, which is very misleading, so they could have all their other shots, be missing their booster shot and they’re lumped in with unvaccinated,” she said.

There is not enough scientific proof of vaccine safety, McDaniel said, to justify taking away a parent’s right not to vaccinate his or her child.

Sorsha Anderson, a member of the Rumney Memorial School Board, said the bill could create real financial impacts for the school if the 41 children whose parents declined at least one vaccine based on a philosophical exemption couldn’t be enrolled.

Numerous parents blamed vaccines for neurologic problems and autism. Many others who testified emphasized that they research the vaccines and carefully decide which are potentially more dangerous and which put their children at risk of spreading diseases.

Dr. Sandy Reider of Lyndonville said the state has a high rate of vaccination overall.

“Most of the unvaccinated kids are missing chicken pox or hepatitis B, neither of which is a threat to public health,” he said.

Pediatricians and a couple of medical students testified in favor of the bill.

“Pretty soon, someone’s going to be injured, whether it’s me or someone innocent,” she said.

Andersson-Swayze said when she was working in Haiti, she saw a child die from tetanus, which is preventable by a vaccine.

“There’s nothing more heartbreaking than having a patient die from a preventable disease,” she said.

Some supporters of the exemption claim the established medical community refuses to acknowledge alternative studies that show the potential harms vaccines can cause.

Conversely, some medical doctors claim opposition to vaccines is based largely on junk science that is not peer reviewed. One high-profile British study connecting autism to a measles-mumps-rubella vaccine has been withdrawn.

Robert Nesbit, a surgeon at Fletcher Allen Health Care, said he was skeptical of the “fake science” asserting that vaccines are unsafe. He said much of the testimony the committee heard was based on studies found on the Internet that are not evidence-based.

Nesbit said the weight of peer-reviewed science falls on the side of ensuring children are vaccinated.

“This is a question of greater good and following evidence-based medicine,” Nesbit said.

Rep. Mike Fisher, the chair of the committee, said the committee has a week to discuss the bill, but he did not know when a vote would be taken.

Thanks for reporting an error with the story, "Lawmakers hear impassioned testimony on vaccine bill"