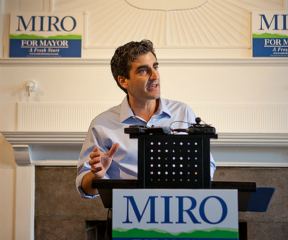 Miro Weinberger, an airport commissioner, says the city needs to take difficult steps toward solvency. He is one of four Democratic candidates.

Miro Weinberger, who won 57 percent of the vote in his race for Burlington mayor on Town Meeting Day, was underestimated from the start.

During the run-up to the Democratic Party caucus last November, state Sen. Tim Ashe, once a Progressive city councilor, looked like a more polished player with the necessary cross-party appeal. Others thought that Bram Kranichfeld, the 31-year-old council newcomer from Ward 2, had some crucial backing from party stalwarts.

Both of them, along with state Rep. Jason Lorber, were defeated in the course of an epic Democratic caucus that had to be reconvened in December after Ashe and Weinberger tied in the third round.

A first-time candidate, Weinberger also looked like the underdog to Republican Kurt Wright throughout most of the general election. Although Weinberger raised more than twice the money and had the entire Democratic establishment in his corner, Wright seemed to have an inherent edge. He had waged two previous mayoral battles, had a working knowledge of city policies and operations gained over 20 years as a councilor and state lawmaker, and was creating a nonpartisan coalition that looked a little like the one that had worked well for Bernie Sanders.

Wright was prepared, practiced and comfortable in his skin, almost inevitable. But despite a moderate message – “citizenship not partisanship” -- he was running as a Republican in a city that has become the state’s biggest left-leaning stronghold. Well aware of that reality, he deflected the few questions that were raised about national issues. He wanted to concentrate on city affairs, Wright would say. Later he publicly pointed out that he would not accept GOP financial support.

He campaigned on restoring local trust and financial stability, presenting himself as a tested leader who was reasonable, open and prepared to make tough choices. Weinberger was the untried newcomer, he argued, big on issuing plans but short on practical experience.

For a while it looked as if the pitch might work. But Wright also talked about selling the Burlington Electric Department – a polarizing prospect -- and was not impressed with the Occupy movement. Beyond that, he could not match Weinberger’s well-organized, social media fueled outreach.

The 3,746 votes Wright received on March 6 represented 37 percent of the vote, only five points higher than his 2009 showing. He knew it was over as soon as the results came in from his home base. He had won Ward 4, but Weinberger was within 150 votes, too close for victory.

It was the first mayoral race since the repeal of instant run-off voting. But there was no need for a second round. Weinberger won handily with more than 5,800 votes.Turnout was above 10,000, up from 2009, when incumbent Progressive Bob Kiss won a second term in the close, controversial race with Wright that led to the end of IRV.

Weinberger delivered on a campaign plan to make inroads in the North End, but also polled above expectations in poor neighborhoods. In Ward 3, where Gordon Paquette – the last Democratic mayor -- won his earliest victories, also the base from which Terry Bouricius introduced “third party” politics to the City Council in 1981, Weinberger was the top vote-getter this time with 65 percent.

Changes in the wards

When Mayor Sanders ran for re-election the first time in 1983, he won 52 percent of the vote and spent $30,000 on the race. Weinberger’s victory was bigger, but it also cost him four times as much.

In 1987, Sanders defeated Democrat Paul Lafayette in five out of six wards. Independent Sharon Bushor joined the council that year as a Progressive-leaning independent. The then-new Progressive Party was close to having a majority. It was, you might say, the darkest moment of the local Democrats' political eclipse.

Now the Progressive Party is in the midst of a similar transition. After electing three mayors over 31 years and being the largest faction on the City Council, it chose not to field a candidate for mayor, dissociated itself from the incumbent it had put in office, and recruited just two candidates.

The party ultimately chose not to endorse Weinberger, Wright or independent Wanda Hines. However, Progressive Councilor Vince Brennan did back Wright, who also won the support of Bushor and Sandra Baird, a former Democratic legislator and Progressive critic.

In a statement of congratulations to Weinberger, Progressive Party Vice Chair Elijah Bergman nevertheless argued that the Democrat’s victory wouldn’t have happened without Progressive support. The help was capped by the blessing of Sanders, issued one week before the vote. Bergman also claimed that the turnout efforts of Rachel Siegel and Max Tracy, the two Progressives who won, “were a key factor in Mr. Weinberger’s outstanding results in the Old North End.”

In Ward 3 Siegel, an instructor at UVM and the YMCA, prevailed in a four-way race with 755 votes, defeating Democrat Sean Hurley and two independents. In contrast, Weinberger had 846 votes, more than double the combined totals of Wright and Hines. In other words, Weinberger's appeal extended to residents beyond the affluent areas. He took every part of Burlington except the New North End, and came unexpectedly close there.

The partial Progressive eclipse in Burlington does not suggest any decline in activism. Across the state on Town Meeting Day, more than 60 communities, including most of the state's largest, passed resolutions recommending a constitutional amendment to make sure that corporations do not continue to have First Amendment rights as people. In Burlington, the call passed with almost 80 percent.

"Vermont is helping to lead the nation on this important issue," Sanders said. "The resounding results will send a strong message that corporations and billionaires should not be allowed to buy candidates and elections with unlimited, undisclosed spending on political campaigns."

In Burlington, a separate advisory resolution inspired by last fall’s Occupy protests also did well. In a tradition that dates back to the 1980s, voters urged the state and federal governments to adopt revenue and investment policies that reduce the growing disparity of wealth and ask the largest corporations to pay a fair share of taxes. It read like a speech by Bernie Sanders.

Despite the opposition of both Weinberger and Wright, Burlington voters also gave the school system a vote of confidence by approving a 10.8 percent school tax increase. It passed with 54 percent, a bigger margin than last year.

Outcomes in various neighborhoods were instructive. In Ward 1, for example, incumbent Democrat Ed Adrian, an attorney and local party leader, ran unopposed. So did independent Karen Paul, a financial adviser representing Ward 6. The two districts cover the University of Vermont and a wealthy neighborhood known as the Hill Section.

Max Tracy, who works at UVM, won easily as a Progressive in Ward 2, which is situated between the university and the waterfront in the Old North End. This was also where Hines had her best turnout, 15 percent. But the groundswell she predicted did not materialize. In North and South End wards she attracted between 2 percent and 4 percent.

In a message released Wednesday, Hines expressed no regrets and said she will return to work next week at the city’s Community and Economic Development Office. She also asked the media to respect her privacy. “I have no more to say,” she wrote. “I need to take care of me now.”

Weinberger also made inroads in the city’s North End neighborhoods, which tend to be more conservative. In Ward 4, Wright’s home base, he received 45 percent. The race was equally close In Ward 7, where Wright received 997 to Weinberger’s 808.

The overall results represent a setback for the GOP, which lost both a council seat and the continuing presence of Wright, the party’s most visible leader for the last decade.

Hines turned out to be a weaker candidate than expected, while Wright reached an apparent ceiling on his appeal.

But the real surprise was Weinberger, a stronger and more determined candidate than skeptics and rivals had predicted. He sometimes seemed uncomfortable during debates, fueling criticisms that he was a political neophyte who might squander the Democrats’ best local opening in years. But he continued to improve as both campaigner and communicator, while building the most successful Burlington political organization in years.

For the Progressive movement three decades of executive power have ended, at least for the next few years. Weinberger promises not to “clean house,” but changes in CEDO and other departments are expected. In the new administration’s first months Weinberger wants to conduct a thorough organizational and financial review to find savings, make a “go-no go” decision on the Moran plant, and convene a summit on the pension system.

The immediate objective is to avoid returning to voters for a city tax hike in the spring.

Thanks for reporting an error with the story, "Campaign Notebook: Burlington Democrats rising, Progressives in eclip..."