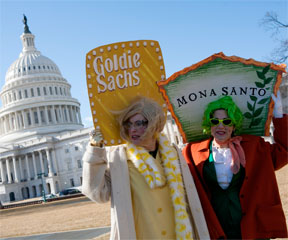 Just when you thought you’d heard of Occupy Everything, along comes a Vermont lobbying group that wants to pitch a tent in the spic-and-span corporate park of the Super PAC, where unlimited cash appears to grow on trees.

KSE Campaigns, a new division of KSE Partners, a lobbying firm in Montpelier, is bringing a granola alternative to the campaign finance tea party with a new independent-expenditure only committee that openly embraces the Occupy zeitgeist (though perhaps not all of the tenets of the movement).

Todd Bailey, a lobbyist with KSE, and Bob Stannard, a blues harmonica player, lobbyist and former lawmaker, are leading the charge. The two men support small “p” progressive issues (they support a tax on millionaires, investments in renewables, protection of unions, etc.) and they believe the Super PAC must be one of the ways liberals in America engage the opposition. The idea is: If money talks, and lefties don’t pony up, they won’t be part of the conversation.

Stannard says, however, “we’re not the Koch brothers.” One big distinction, besides the overtly liberal bias? Much shallower pockets.

“When Todd Bailey and I started talking, neither of us were enamored with how Super PACs came into being, but if you look at how much money is spent to influence elections in this country, the fact is it’s daunting,” Stannard said. “It led us to this process of OK, we may not like this, but shouldn’t we be participating? Either you use it to advance an agenda, or you just sit there and wish you had.”

ABBTT, also known as Occupy2012PAC.org, is a national political action committee and will focus on federal elections.

Scott’s employees back at work after fire

Republican Lt. Gov. Phil Scott was back in the Legislature for his usual morning coffee hour with lawmakers last Thursday, less than a week after his business, Dubois Construction of Middlesex, burned to the ground on the evening of Jan. 7.

Scott hosted the weekly office open house with his usual low-key flair, and Statehouse mavens came by to see how he was faring. The lieutenant governor said most of his employees were back at work on the Monday after the blaze took out three dump trucks, other equipment and several buildings.

No one was hurt as a result of the fire (even though several workers rescued equipment as the buildings burned). The day after, a handful of his 25 year-round workers were on the scene to give their condolences.
They were back to work by Monday, thanks to a bit of ironic luck. Scott loaned a trailer to the Department of Buildings and General Services last fall for state employees who were displaced after Tropical Storm Irene.

On Jan. 6, just hours before the blaze, he got a call from the department: Would he like his trailer back? The answer was sure. Scott had the temporary office moved in place that weekend. By Monday, DuBois was taking road salt orders “as usual.”

Though the property is a total loss, it will be a while before the total damage is assessed. Scott gave one example, though, of the kind of unexpected costs he didn’t think about before the fire -- the manuals for the Caterpillar equipment he uses to repair his equipment were turned to ash. The replacement cost? $12,000.

Still, Scott said the fire didn’t compare to what he saw other Vermonters go through as a result of Irene. At least, he said, he was insured. When people offered to send him donations, he issued a press release, asking them to donate to the Vermont Long Term Disaster Recovery Group and the Vermont Flood Relief Fund instead.

“I can’t in good conscience accept any monetary donations, after having personally witnessed so many Vermonters losing everything as a result of Irene,” Scott said in a statement. “Our company was insured. While insurance never makes you whole, we should be able to rebuild and stay in business, unlike many small business owners who will never rebound from their losses as a result of Irene.”

Proposed legislation by Sen. Hinda Miller, D-Chittenden, would adjust a law passed last year to clarify the rules on insurance coverage for home births. Insurers, midwives and lawmakers are also meeting to try to find a solution without changing the law.

Miller, who sponsored legislation last session to ensure midwives’ services for home births would be covered under private insurance, said the proposed bill will take away the barrier to coverage caused by private insurance companies requiring malpractice insurance.

“The intent is that women with private insurance have the right to have that midwife bill reimbursed,” Miller said.

The law requires private insurance companies to cover services provided by licensed midwives. Numerous midwives, however, have found their services are not covered by Blue Cross Blue Shield of Vermont because they do not carry malpractice insurance. 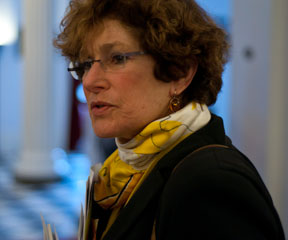 Miller’s bill would ensure that insurance companies do not impose additional practice conditions or qualifications beyond those required by licensing statutes. It would also require insurance companies to cover services of a midwife who is out of the company’s network if it does not have one in its network.

Representatives from Blue Cross Blue Shield, members of the Senate Health and Welfare Committee and some midwives met Thursday to see if they could reconcile their differences without added legislation.

Kevin Goddard, vice president of external affairs and sales for Blue Cross Blue Shield of Vermont, said the insurance company will return in a week with evaluations and potential solutions.

“We’re not trying to create any obstacles,” Goddard said.

He said the malpractice insurance requirement is part of being in the company’s network, and it is consistent among a broad category of providers. The reason, he said, is to protect patients. Some of the most renowned medical practices have bad outcomes, and malpractice insurance ensures compensation for a patient, Goddard said.

Cassandra Gekas, who lobbied for the bill on behalf of the Vermont Public Interest Research Group, said the groups are still trying to find a compromise to avoid the need for further legislation.

One problem, she said, is the limited number of practicing midwives in the state, 17, would not be enough to create a joint underwriting association that would create an insurance pool.

In case you missed it, Rolling Stone last week recognized Vermont’s Governor Peter Shumlin as one of America’s “12 leaders who get things done.” This select group stood apart from the new crop of ideologically driven politicians (“GOP fire-breathers”) who have created gridlock in Congress where they promised reform and “common sense.”

Shumlin was praised for his rapid response to Hurricane Irene, though his major achievement was seen as Green Mountain Care, the nation’s first single payer universal healthcare plan.

The plan was praised as more pragmatic than Obamacare in dealing with costs and volume of procedures, though the segment ended with former-governor Howard Dean’s downbeat observation that the “governor and state legislature must still design, finance, and implement Green Mountain Care.”

Shumlin was one of three governors selected for the article, including Oregon Governor John Kitzhaber and New York Governor Andrew Cuomo. Kitzhaber placed a moratorium on the death penalty during his third term as governor. Cuomo was selected for his reform of the student loan industry and changes to the state tax code that shift the burden to wealthier residents, and most famously, for legalizing gay marriage in New York.

Thanks for reporting an error with the story, "Digger Tidbits: Occupy the Super PAC? Home birth bill, take 2?"