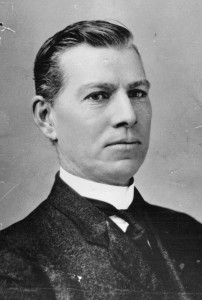 Editor’s note: This essay by Greg Guma is from The Vermont Way: Restless Spirits and Popular Movements, a new study of the state’s evolution and influence slated for release in 2012. To find out more, visit The Vermont Way.

Geography made Burlington the fastest growing part of Vermont as early as the 1820s, when a canal at the southern end of Lake Champlain created a trade route from Canada to New York. Once railroad lines were added along the burgeoning waterfront, what became known as the Queen City emerged as the region’s transportation and business hub.

“In a commercial point of view,” crowed the Burlington Clipper newspaper, “Burlington is most favorably placed.”

What was true for commerce also held for immigrants. Waves of Irish, French Canadians, Italians, Jews and Germans rolled in. The effects were clearly felt by the turn of the century. Vermont remained a rock-ribbed Republican state, but an active working class had emerged in Burlington and Democrats, albeit some of them prosperous “charter members” of the community, took control of City Hall.

In the years that followed Burlington hosted “progressive era” reforms like a municipally-owned electric company, public dock and restrooms, an attractive train depot with modern amenities, playgrounds for children, and a public wharf. A central figure during this period was James E. Burke, first elected mayor in 1903 and re-elected six times over the next 30 years.

A Catholic blacksmith and son of Irish immigrants from Canada, Burke began his political career when he was almost 50, becoming a champion of the poor, labor, and ethnic newcomers. After rising to prominence largely on the freedom to reach the public with his ideas, you might think he would cherish the right of dissent no matter who was speaking. Yet Burke sometimes revealed a tendency to drown out his opposition.

There was the night when the Masons visited the City Council to request tax-exempt status on their Church Street property. Hamilton Peck, a former Republican mayor with whom Burke had battled over control of the Street Commission, represented the Masons. When he asked to speak, Burke rapped his gavel angrily and refused. Assuming that he spoke for everyone, the mayor told the lawyer that they’d heard as much of his talk as they wanted. Peck accused Burke of denying his right to speak. A board majority decided to give him five minutes.

“The mayor not being a Mason,” Peck began. That was too much for Burke. “I resent that,” he interrupted, “be a gentleman.” Peck continued, threatening a lawsuit in the process. Burke was defiant, virtually daring the Masons to file. Members in the audience stormed out in disgust.

Given his short fuse, it’s no wonder that Burke often found himself in legal battles. Luckily for Burlington, he was frequently sustained in court. That was the case with the Masons, who refused to pay their taxes until 1910, when the State Supreme Court ruled against them.

But his most infamous moment of intolerance came on September 3, 1909. In the midst of battles with corporate power, he used police power to deny the freedom to speak to a woman whose philosophy he abhorred.

Emma Goldman was one of the most famous radicals in the country, a forceful speaker who had come to Vermont to discuss “anti-militarism” and the truth about anarchism. In Barre and Montpelier, although some people did object, she found public venues. Her audiences paid 25 cents for admission and were certainly educated and entertained, if not persuaded.

The night before her Burlington engagement at City Hall, however, Mayor Burke sent a telegram to Montpelier telling her that the auditorium wasn’t for rent, even though her manager had put down a deposit. On September 2, the Free Press printed the mayor’s statement:

“Announcement having been made that Miss Emma Goldman, apostle of anarchy, would speak at City Hall Friday night, I wish to say that she will not be allowed to preach any of her un-American doctrines in any building owned by the City of Burlington; and I would also request that the proprietors of all other halls refuse to let her have them for the above-named purpose, and I believe it is about time that the American people should insist that Miss Goldman while representing her anarchist teachings, should not be allowed to address public audiences.”

Burke’s hard-line position confused the city’s small Jewish community. The mayor was popular among them, but Goldman was, to be sure, a well-known Jew. Some people wanted to see her. Reacting quickly, her manager Ben Reitman made emergency arrangements for Goldman to speak at Isaac Perelman’s Hall on the corner of Cedar and Lafountain streets. On the day of the talk he distributed red posters around town. 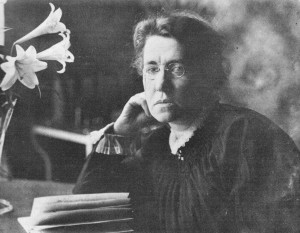 Emma’s topic was supposed to be “Anarchism and What It Really Stands For.” She wanted to respond directly to the mayor’s attack. To draw the line more clearly, the following words were emblazoned on the publicity flyers:

IS THERE FREE SPEECH AND FAIR PLAY IN BURLINGTON?

Most storekeepers refused the flyers or tossed them out. But a large billboard with the same message was propped against the fence in front of the Unitarian Church.

At 7 p.m. Goldman and her manager arrived at the hall. A large crowd was already inside. Burke was outside with two policemen. When Goldman tried to enter, the officers took up positions in front of the door and Burke made a speech. She was forbidden to enter, he said. Attacking her politics again, he added that citizens were angry and at least one merchant in the neighborhood feared violence.

Reitman and Goldman had seen this kind of hostility and disregard for speech rights in other places. Deciding to withdraw, they asked if Reitman could enter alone to address the audience as a member of the New York Free Speech Committee. Burke refused, ordering both of them “in the name of peace, of society and of law and order” not to speak anywhere in his city.

The next day the anarchists departed for Massachusetts and the mayor proudly claimed that he had done his duty — protecting Burlington from un-American ideas and “treasonable utterances.” It wasn’t one of Burke’s more progressive moments.

Thanks for reporting an error with the story, "The progressive who silenced ‘Red Emma’"