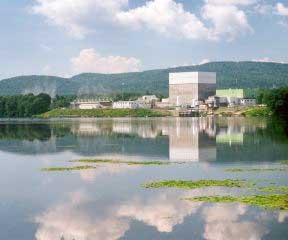 Vermont Yankee on the banks of the Connecticut River

The Vermont State Nuclear Advisory Panel recently held a hearing about safety issues at the plant. Officials from the Nuclear Regulatory Commission answered questions about a Dec. 6 incident in which two backup generators that operate a plant cooling system were shut off. They also presented information about a report on Mark 1 General Electric reactors in light of the March nuclear plant disaster in Japan. In addition, Vermont Yankee plant employees informed the panel that the Construction Office Building well, which was found in 2010 to be contaminated by a tritium leak at the plant, will not be retested.

Earlier this month, a plant operator mistakenly turned off a backup generator at the same time another emergency generator was down for service.

The two generators were down for about two minutes, according to a report from the Associated Press, and the plant continued to operate.

The incident sparked questions at the panel hearing.

Elizabeth Miller, VSNAP Chair and Department of Public Service Commissioner, wanted to know what timeline resident inspectors follow when there is a breach of safety protocols at the plant.

Scott Rutenkroger, the new NRC Senior Resident Inspector who was previously stationed at James A. FitzPatrick nuclear power in Scriba, N.Y., outlined his daily work rounds for the panel.

The timeline for this screening “varies a lot,” Rutenkroger said. He explained that inspectors study problems and then review the NRC’s regulations or standards.

Rutenkroger said the NRC also wants to see what the licensee, Entergy, produces in its root cause analysis.

Once the inspectors understand the event in total, they document the issue in their quarterly inspection report, Rutenkroger said. The next such report is due in January, he told Miller.

VSNAP member Jim Matteau asked whether Rutenkroger ever saw “something troubling” or if there were any “unpleasant days” during his routine at VY that required a work plan change.

Rutenkroger said he didn’t know “how to grade that question.”

Chris Miller, director of the division of reactor safety for the NRC’s Region 1, which has jurisdiction over Vermont Yankee, gave a presentation on the commission’s actions in response to the nuclear accident at the Fukushima Daiichi nuclear complex in Japan.

Several of the reactors discharged radiation after an earthquake and tsunami hit the country in March.

Chris Miller said after the accident in Fukushima, the commission assigned a task force to evaluate the 104 nuclear reactors in the United States.

The commission has prioritized the task force’s recommendations into phases, with some items pegged for immediate action. Other responses fall into near-term and long-term categories, he said.

Chris Miller’s presentation listed the “recommendations the NRC intends to pursue without delay,” including reevaluating seismic and flooding hazards and modifying the sustained black out rule, which outlines expectations for plants operating during power outages.

The loss of backup generation directly accounted for the disaster in Japan.

Recommendations with longer timelines include seeking “stakeholder [industry] input in determining action on each recommendation,” developing new regulatory requirements, expanding the radius of the emergency planning zone beyond the present 10 miles, and addressing issues with dry cask storage.

Also, he said, the commission’s rule-making process historically has taken three years because of inclusion of public feedback. The commission will probably limit public input on the Fukushima recommendations to speed up the process, Miller said.

“Within days of a shoe bomber failing to blow up an airplane, we were all taking off our shoes,” said state Sen. Mark MacDonald, a VSNAP member, referring to the Transportation Security Administration’s procedure of X-raying shoes after a failed terrorist plot in 2001.

“What’s going on at VY now that’s different than before the Fukushima accident?” he asked.

Rutenkroger said inspectors had identified post-Fukushima issues at VY and documented them in a May inspection report.

Vermont Yankee State Liaison Engineer Bernard Buteau told the panel that Entergy has no plans to take any more samples of a former drinking well on the plant site, known as the Construction Office Building well, that was found to be contaminated with tritium in 2010. Buteau said that further sampling will create a path for the radionuclide to contaminate drinking water.

In November 2009, tritium was found leaking from the plant. Engineers isolated the source — leaking underground pipes encased in a concrete tunnel — in January 2010.

Vermont Yankee “proactively” closed the Construction Office Building well, which was used as a drinking water source for employees at the plant, in February 2010, said Buteau.

Samplings of the COB well later that year tested positive for tritium.

Tests measured 1,040 picocuries per liter in a “fracture zone” in the well about 200 to 220 feet down, Entergy spokesperson Larry Smith told The Commons in an October 2010 interview.

“It’s [the tritium] in the aquifer,” Smith said at the time.

According to Buteau, VY ceased sampling the well in January 2011. The COB well’s shaft descends into the bedrock, he said, so sampling it could cause tritium to enter the aquifer below.

Buteau also said that the company had contracted with an environmental firm to develop a hydrology model of how water moves through the soils under the plant.

The model determined that water flows west to east toward the Connecticut River and upward from the bedrock toward the soil’s surface, he said.

Entergy has drilled 32 monitoring wells at VY to test for tritium moving through the groundwater. The company tests an additional seven local drinking wells in Vermont and New Hampshire, said Buteau.

These drinking water wells have never tested positive for tritium, he said.

“There’s no [tritium] ingestion path for the public as confirmed by the NRC in inspection reports,” said Buteau. “It’s not prudent, nor do we need to sample the COB.”

The company will leave the COB well alone in an attempt to safeguard the public, said Buteau.

Becker added that representatives at the Environmental Protection Agency’s lab in Washington D.C. believed that the vacuum method previously used to sample the COB well, which also risked injecting tritium into the aquifer, was unnecessary.

Most of the 20 members of the public spoke out against the nuclear plant during the public comment portion of the meeting.

Clay Turnbull of the New England Coalition on Nuclear Pollution (NEC) presented the panel with a press release and copies of a staff report from U.S. Rep. Ed Markey, D-Mass.

Turnbull said the report, “Regulatory Meltdown: How Four Nuclear Regulatory Commissioners Conspired to Delay and Weaken Nuclear Reactor Safety in the Wake of Fukushima,” confirmed the NEC’s concerns that the commission regularly attempts to weaken the regulations governing nuclear plants and engages in “foot dragging” on Fukushima-related reforms.

Turnbull also described the report as outlining how four commissioners had failed to “enlist” NRC Chairman Gregory Jaczko to their “wait-and-see and behind closed doors approach.”

Attempts by Jaczko’s colleagues to remove the chairman have been the focus of recent congressional testimony.

In the NEC press release, the 40-year-old anti-nuclear group called on VSNAP members to recommend that Shumlin, Attorney General William Sorrell, the Department of Public Service, and the state’s Congressional Delegation “strongly support NRC Chairman Gregory Jaczko before President Obama and the U.S. Congress and in support of prompt, decisive, and ongoing action and regulatory reform responding to Fukushima’s lessons.”

“There is reason to believe that hydrogen, which fed the appalling explosions at Fukushima, may have been created, at least in part, from localized boiling of spent fuel coolant,” said NEC Technical Advisor Raymond Shadis.

He added that the NRC “has calculated potential latent fatalities of a spent fuel fire at VY to be up to 25,000, out to a range of 500 miles; despite successful early evacuation of the 10-mile evacuation zone.”

“The NRC won’t do these jobs unless held accountable by citizens and the state,” said Turnbull.

Editor's note: Because of an error, the end of this story was not originally posted. The full text was restored on Dec. 30.

Thanks for reporting an error with the story, "Vermont Yankee safety, Japan, NRC turmoil: 3 hot topics at advisory p..."