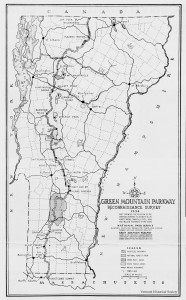 Editor’s note: This essay by Greg Guma is from The Vermont Way: Restless Spirits and Popular Movement, a new study of the state’s evolution and influence slated for release in 2012. To find out more, visit The Vermont Way.

Vermont’s expanding tourist sector received support from the Works Progress Administration throughout the Depression years. In southern Vermont that meant the completion of routes 9 and 7. Various state parks and airports were also upgraded. The first ski rope tow in the country started operating in Woodstock in 1934, with George Aiken, then speaker of the Vermont House of Representatives, in attendance.

This sparked the expansion of seasonal employment in the commercial ski industry. Ski trails gradually crisscrossed the state, and wealthy visitors bought farms abandoned by those who could longer make a living on the land.

One business-backed project did hit a snag, however, a proposed Green Mountain Parkway along the ridge of the famous mountain range. Among its main boosters was James Paddock Taylor, executive secretary of the Vermont Chamber of Commerce, who envisioned a beautiful, 260-mile ribbon of road extending from Canada to Massachusetts.

Washington, D.C., wanted it, and, according to Taylor and other influentials, so would most Vermonters once they understood the benefits. A major selling point was that construction would create jobs for some of the 16,000 Vermonters out of work. All the road’s backers needed was legislative approval of half a million dollars to purchase rights of way.

For Taylor and others who wanted the state to be more like the rest of the country, the parkway was viewed as a progressive initiative. It would create a new and modern state of mind. “The Parkway is a part of that program to get Vermont out of her valley-mindedness into the big view of things which should be expected from a mountain people,” Taylor wrote.

But many residents were suspicious, especially of President Roosevelt and his New Deal. They didn’t like the idea that the federal government would take control of 50,000 acres of land along the ridge of the state’s main mountain range, and preferred to see any extra money go toward fixing existing roads and bridges. Many feared that a nationally controlled parkway would literally cut the state in half.

The Burlington Free Press thought it was a fine idea. “If our Washington Santa Claus wants to send us up ten millions to build a road over the side of our old Green Mountains, let’s graciously accept it and put the boys to work,” the paper chirped in a March 1935 editorial. But other papers, notably The Rutland Herald, weren’t convinced about the potential benefits. “The parkway would take tourists out of the valleys, where we can sell things to them, into the hills, where we can’t,” the Herald predicted. Half a million dollars was too much to borrow, an editorial added, and “a wilderness area now rich in game will be spoiled for hikes, sportsmen, horseback riders …”

Herald headlines of the time often played to public fears:

GASH ON THE MOUNTAINSIDE

ELIMINATION OF THE WOODLANDS

TOLL GATES AT EVERY CROSSROAD

On December 14, 1935, the Vermont Legislature finally met to consider the Green Mountain Parkway Act, designed to give the National Park Service jurisdiction over the necessary land and appropriate matching funds for the road. The debate was spirited.

One opponent called the promise of jobs propaganda and warned that the bill for construction would be passed on to future generations. A supporter replied, “Spending five hundred thousand dollars to get 18 million? I call that a pretty good deal. And as far as the argument that it will become a through way, that’s just ridiculous. Mister Speaker, Franklin County is unanimously in favor, and so is former governor Wilson.”

Another skeptic questioned whether the road would ever be completed. “The way it looks now,” he predicted, “one of two things will happen – either the whole country will go bankrupt or someone will step in and stop the spending. Either way, we’re stuck holding the bag.” Another said that people were “sending out an SOS. Heed it, I beg you, and let the people decide.”

The resolution passed but the advice was heeded. On March 3, 1936, the final decision was put before the people in a statewide referendum. Actually, the Legislature was just asking voters to choose between two start dates – April 1, 1936, or five years later. But most people understood it was probably now or never.

When the votes were counted a convincing majority had rejected the federal government’s $18 million offer. There was strong support for the road in northern counties – Chittenden, Franklin, Grand Isle, Lamoille and Washington – but it was roundly rejected in the south. As some opponents put it, they simply didn’t want the national government to become a large property owner and regulator of land in Vermont. The final vote was 31,101 in favor and 43,176 opposed. “Well, the people have expressed their opinion in no uncertain terms,” huffed the Burlington Free Press. “So that’s that.”

Was the decision enlightened or selfish, provincial or progressive, conservative or radical? It is difficult to categorize. Nevertheless, Vermonters had spoken, using their unique form of grassroots democracy – Town Meeting.

As late as 1960, the National Park Service was still recommending the Green Mountain Parkway as part of an Appalachian Parkway system, but nothing happened. UVM professor Frank Bryan has argued that its defeat in 1936 was “the most democratic expression of environmental consciousness in American history, mythic in its defiance and radical in its implications – a Vermont that is green and rebellious.”

Thanks for reporting an error with the story, "The parkway that never was"