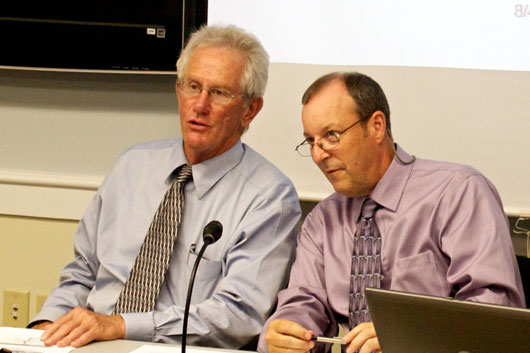 The Department of Banking, Insurance, Securities and Health Care Administration issued a proposed decision Thursday that would deny a certificate of need application from a for-profit company to purchase outpatient kidney dialysis clinics from Fletcher Allen Health Care.

Steve Kimbell, commissioner of BISCHA, issued strong, almost scathing, criticism of the application from Bio-Medical Applications of New Hampshire, a subsidiary of Fresenius Medical Care Holdings. In the proposed decision, Kimbell found that Fresenius did not meet the necessary statutory requirements of improving service, containing costs and serving the public good.

Fresenius can file briefs and exceptions in response to the proposed decision from BISHCA. The department will hear oral argument Jan. 18.

The Vermont Workers’ Center, which has been an outspoken critic of the sale, issued a press release Friday calling the proposed decision a “victory” for Vermont dialysis patients.

If Kimbell reverses his proposed decision and gives approval for the sale of six out of seven of Fletcher Allen’s dialysis units to Fresenius, the Burlington hospital would receive about $26 million for the transaction.

Fresenius Medical Care is the world’s largest integrated provider of products and services for individuals undergoing dialysis because of chronic kidney failure. Under the Social Security Act, Medicare funds coverage for virtually anyone diagnosed with kidney failure regardless of age or income.

Fletcher Allen announced the proposed sale to Fresenius in 2010, citing financial losses. Local hospitals have supported the idea because they are concerned the service could go away. The proceeds would, Fletcher Allen has argued, allow it to refurbish inpatient facilities.

A certificate of need application must meet applicable criteria from the state Health Resource Allocation Plan, including improved patient care and cost containment.

Kimbell wrote: “I decline the invitation to ignore the process set out by the Legislature and to effectively give approval for a $26 million future construction project by the back door.”

The department says the proposal would increase by four-fold the charges to commercial payers in the first year of operation. Total spending on the service would increase by more than $6 million under Fresenius ownership.

“This is not cost containment,” Kimbell wrote.

Fletcher Allen could continue to operate the clinics and raise prices for commercial payers by $1.8 million, Kimbell notes. It could also raise rates in other areas since the hospital, as a whole, is not operating at a loss.

Fletcher Allen offered data comparing quality measures at the hospital against Fresenius. On each of these measurements, Fresenius scored lower -- sometimes by slight margins and sometimes by large gaps.

In a prepared statement, Mari Cordes, president of the Vermont Federation of Nurses and Health Professionals, said the union has been concerned from the beginning that “a huge for-profit multi-national corporation like Fresenius would not be able to provide patients with the high quality of care that Vermonters receive now.”

BISHCA granted the union party status in the proceeding, and it has been in preliminary negotiations with Fresenius for a contract. The Workers’ Center was denied interested party status. The proposed asset purchase agreement would require Fresenius to offer to employ Fletcher Allen employees with direct patient care responsibilities. And though it requires the corporation to engage in some form of negotiation with the union, it does not require Fresenius to offer the same contract to union employees as they had with Fletcher Allen.

As an interested party, the union raised concerns about the way Fresenius operates dialysis clinics in regard to staffing levels, mortality rates, anemia control measures and changes in standards for “clean” filtered blood.

Numerous studies and news reports have highlighted trends in increased mortality rates in for-profit hemodialysis centers. Representatives for for-profit dialysis companies have said the studies are based on outdated data that does not reflect improved methods of dialysis.

BISHCA will hear oral argument in the proceeding at 1 p.m. Jan. 18 in the office’s third floor conference room at 89 Main St., Montpelier.

Thanks for reporting an error with the story, "BISHCA proposes to deny approval of sale of Fletcher Allen’s dialys..."