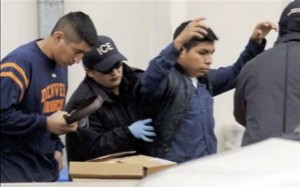 An Immigration and Customs Enforcement officer frisks a migrant worker.

Gov. Peter Shumlin announced on Friday that the Vermont State Police have adopted an expanded bias-free policing policy. Under the new rules, troopers should not ask foreign nationals to prove they are U.S. citizens for civil violations, such as routine traffic stops, unless they are suspected of committing a crime.

The new bias-free policing policy adopted by the Department of Public Safety requires state troopers to refrain from asking individuals – including migrant dairy farm workers– about their immigration status. The new rules and procedures also say that state police aren’t obliged to contact Border Patrol or Immigration Custom Enforcement – unless the individuals are suspected of having been engaged in criminal activity.

“We owe it to our troopers to provide them clear guidance about state law enforcement priorities and parameters,” Shumlin said in a statement.

The change was sparked by advocates who have alleged that in several recent incidents involving Mexican migrant workers, police have engaged in racial profiling and have helped federal agents target undocumented workers, many of whom have been subsequently deported.

The don’t ask, don’t tell policy is a dramatic departure from the Department of Public Safety’s previous rules and procedures for encounters with foreign citizens, which were open to broader interpretation. Under the new rules, state troopers must make enforcement of state and local laws a priority over federal immigration laws. There is an exception in the policy for troopers who have reason to believe an individual has recently crossed the border illegally.

Shumlin asked Beth Robinson, his general counsel, to review the existing policy after civil rights activists and migrant dairy farm workers from Mexico petitioned the governor’s office when a leader of the Vermont Farmworker Solidarity Project was arrested during a traffic stop in Middlesex in September.

Danilo Lopez, and his cousin Antonio Meza-Sandoval, were passengers in a car driven by a friend of a local farmer who was pulled over for speeding. Trooper Jared Hatch asked the two men, who are from Mexico, for proof of American citizenship. When they were unable to produce identification, he alerted the Border Patrol. Meanwhile, Lopez texted advocates who held a protest at the Middlesex State Police Barracks (three of the activists were arrested) and followed the two migrant workers in police custody to Richford where they were held for processing. The two migrant workers were released the same day; they have been summoned for a deportation hearing on Dec. 6.

The Vermont Farmworker Solidarity Project members and affiliated groups alleged that the officer violated the troopers’ existing bias-free policing policy. Shumlin called for an investigation into the incident. The State Police Advisory Commission recently issued a report stating that Hatch had probable cause to stop the vehicle (the driver was speeding) and he had reason to believe “the persons within the vehicle were engaged in criminal conduct” because of the subjects’ “excessive nervousness,” “failure to make eye contact” and “inconsistent answers to questions.” The Vermont Human Rights Commission is also investigating the traffic stop.

Public Safety Commissioner Keith Flynn said the new rules, which allow migrant workers to use identification from the Mexican consulate, will “further ensure the fair and equal treatment of all individuals in Vermont.”

“It is important to provide meaningful direction and guidance to our members in a way that will best serve the department and individuals in Vermont, while at the same time furthering the leadership priorities set forth by Governor Shumlin,” Flynn said in a statement.

The new policy is a victory for the Vermont Farmworker Solidarity Project, which has advocated for the adoption of new rules for police that prevent racial profiling and immigration status checks of Mexican migrant workers who engaged in ordinary activities — shopping at local stores, playing soccer on farms or traveling as passengers in vehicles.

Vermont dairy farmers rely on Mexican migrant labor because they are unable to find local employees willing to endure the physically challenging work. More than 1,200 Mexican workers are employed on farms in Vermont, and many of them work in Addison, Franklin and Orleans counties. Most of the workers are afraid to leave the farms for fear of being deported. The advocacy group has alleged for several years that the state police and municipal law enforcement officers unnecessarily report the workers to the Border Patrol.

A spokeswoman for the group, Natalia Fajardo, said they see the new policy as a “significant improvement.” The governor recently met with five of the workers who helped to hammer out the policy with Robinson and law enforcement officials.

“In general we feel it’s a good step in right direction, and we thank Gov. Shumlin for diligence on this issue,” Fajardo said. The advocacy group attracted media attention to the issue and disseminated video footage of the protests and conversations with other migrant workers who also had been apprehended by the police over their immigration status, even though they had not broken any laws.

“In some respects, it more clearly defines some exceptions right near the border,” Sorrell said in an interview. “The bottom line is that this is very, very similar to the model policy in terms of intent. It’s a strong statement, and state and local police have a lot of work to do in enforcing Vermont laws, and those are the state’s policing priorities. State and local police do not need to enforce federal immigration law more strenuously than feds are doing.”

The new state police rules run counter to the spirit of the federal “Secure Communities” policy, which forces local law enforcement officers to help enforce immigration laws and act on behalf of immigration officials. The Shumlin administration has carefully worded the state police policy, which includes an exception for evidence of an active border crossing.

Sorrell said the state of Arizona, in contrast, has a “prove your innocence kind of approach.” The Department of Justice struck down the Arizona law, which requires local law enforcement to turn over all residents who do not have U.S. identification to federal authorities.

Allen Gilbert, executive director of the Vermont Chapter of the American Civil Liberties Union, said being in this country without the proper papers is not a crime, it’s a civil violation. In his view, the new Vermont State Police policy is a “needed change to the way that police work with all people in this state.”

“It’s important to recognize that this is doing nothing more than what should happen anyhow,” Gilbert said. “Federal laws should be enforced by federal officials, and that’s really what the policy simply states. It’s not a surprise in terms of what’s supposed to happen. I think a lot of emotions have swirled around the migrant labor issue because of the difficult economic times we’ve been facing. I hope that there’s not an element of racism in the issue. But this policy will certainly go a long way to ensuring people of all nationalities and immigration status are treated fairly.”

Gilbert said the model bias-free policing policy recommended by the attorney general’s office has not been adopted by many of the state’s local law enforcement agencies.

“It really remained a dormant document,” Gilbert said. “Not because it was vague, but because it had no force. The Department of Public Safety has now given the bias-free policing policy for the Vermont State Police force.”

Fajardo said police training will define how the policy is used on the ground. She hopes that troopers will clarify the policy, which could allow the lines between the Vermont State Police and the Border Patrol to continue to blur.

Troopers are under contract through Operation Stonegarden, a Department of Homeland Security program, to provide backup services for the Border Patrol. In 2009, the Vermont Department of Public Safety received a $501,000 grant to take assignments on the border to “conduct aggressive patrolling operations along all traffic corridors along the border area,” according to a memo from the department.

Thanks for reporting an error with the story, "Under new rules, Vermont State Police can no longer ask undocumented ..."