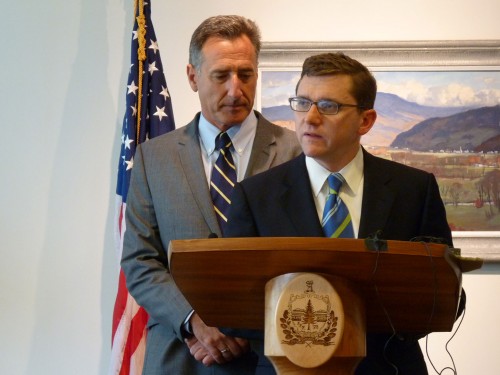 If there were doubts about whether the Vermont GOP would refrain from partisan sniping after Gov. Peter Shumlin hired Republican stalwart Neale Lunderville as the state’s recovery czar, those questions can be safely put to rest.

On Friday, the Vermont GOP gleefully seized on Shumlin’s three and a half day break on the Columbus Day weekend as fodder for a nastygram. The governor was in Cape Breton from Thursday through Sunday afternoon (he returned to give opening remarks for the Grace Potter “Goodnight Irene” concert at the Flynn Center for the Performing Arts in Burlington).

Pat McDonald, party chair, quoted a statement the governor made on Sept. 5, just eight days after Tropical Storm Irene devastated central and southern Vermont. "I'm not going to rest, we're not going to rest until we get the better of Irene and we put Vermont back to better than the way she found it." (NECN, No Break From Flood Clean Up, 9/5/11)

Then McDonald chastised Shumlin for taking time off Oct. 7-10.

With Vermonters still working hard to put the pieces back together after Irene and with hundreds of state employees still not at work, Shumlin certainly isn't living up to his promise.

Vermonters should not be surprised. Shumlin took no action within his own Administration when his Deputy Secretary of the Agency of Human Services (AHS) left Vermont for a protest in Washington DC with a Hurricane barreling towards Vermont. Weeks later, with hundreds of AHS employees out of work due to flooding at the Waterbury state office complex, sources say the Secretary of AHS took a two week vacation to France!

When Governor Shumlin should be encouraging people to vacation in Vermont, he has instead chosen to leave the state for his own vacation.

Vermonters can't afford such a lack of leadership.

Shumlin is in the habit of working through most weekends, attending meet-and-greets around the state, and his post-Irene public schedule has been even more unrelenting than usual -- he has, for example, visited some flood locations, including Moretown and Waterbury, three times since Irene.

Sue Allen, special assistant to the governor, said in an email, “This partisan political attack is shameful.”

The governor worked “26 straight days before taking a day off,” Allen wrote. “In the 43 days since Tropical Storm hit Vermont, the governor has taken a total of four days off, including yesterday and today,” she said.

Shumlin’s jaunt to Cape Breton was the third trip to his remote getaway in Port Hood since July. He was last in Canada with his daughters the last week in August – a few days before Tropical Storm Irene hit. There was also a July sojourn at the Cape Breton cottage. Shumlin vacationed in Dominica at the end of February.

Thanks for reporting an error with the story, "Fair or foul? Vermont GOP chides Shumlin for Columbus Day break"