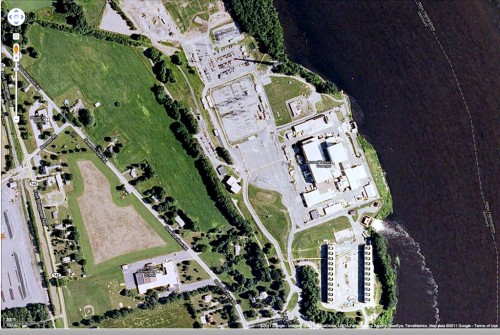 Editor's note: This article was first published by The Commons.

The disagreements focus on one requirement: a certificate of water quality issued under section 401 of the federal Clean Water Act.

In their petitions, filed separately but combined by the court for efficiency, the New England Coalition (NEC), an anti-nuclear organization, and the Vermont Department of Public Service (DPS) asked the court to review the NRC’s decision to renew Vermont Yankee’s operating license until 2032.

According to court documents, the NRC’s failure to obtain a 401 certificate renders the plant’s renewed license invalid.

Processes built into the Clean Water Act dictate that the onus for obtaining a 401 certificate rests with the licensee and the awarding federal agency, said Anthony Iarrapino, a staff attorney with the Conservation Law Foundation working pro bono on NEC’s behalf.

The groups contend that the NRC’s license renewal is invalid because the commission never obtained and neglected to ask for a 401 certificate from Entergy.

This case does not dispute whether the NRC should have awarded Vermont Yankee its operating license in the big picture, said Iarrapino.

Ultimately, the NEC and the state want Entergy and the NRC to comply with the CWA, he said, so they have asked that the court suspend Vermont Yankee’s renewed license until Entergy obtains a 401 certificate.

Calls to the DPS were not returned by press time.

Entities seeking a federal license must obtain a 401 certificate from the state if they might discharge pollutants.

According to the U.S. Environmental Protection Agency’s website, the Clean Water Act of 1972 established a structure “for regulating discharges of pollutants into the waters of the United States and regulating quality standards for surface waters.”

Under the CWA, the EPA has implemented standards for industry regarding wastewater and water quality standards for any contaminants in surface waters.

The CWA also makes discharging pollutants from sources like pipes or ditches into “navigable waters,” like the Connecticut River, illegal without a permit.

While the federal government has the authority over what companies can build within a state, the Congress has also decided that preserving water quality and protecting wildlife remains with the states."

The CWA also requires that entities applying for federal licenses or permits, like Vermont Yankee seeking its operating license, obtain a 401 certificate from the state. According to its website, the EPA designed this certificate to give states and tribal authorities the power to ensure a federal applicant will comply with water quality standards.

Vermont has the authority to impose conditions relevant to protecting in-state water quality on entities requesting a federal license. The Vermont Yankee Nuclear Power Co., the plant’s previous owner, obtained a 401 certificate in 1970.

According to the NRC’s filing, “Entergy claimed that Vermont Yankee’s original 401 certification and possession of a ‘current and effective NPDES permit issued by [Vermont]’ satisfied 401 requirements.”

Entergy spokesperson Michael Burns said the company had no comment outside of what appeared in court documents.

A request to dismiss

For the commission’s part, it has requested the appeals court dismiss the NEC and DPS petitions altogether.

The NRC countered in its motion to dismiss, filed earlier this month, saying that the petitions raised “complex and undecided Clean Water Act issues” making the NEC and DPS requests for summary reversal “inappropriate.”

Lawyers for the commission also said the NEC and DPS did not raise their claims in a timely manner, exhaust the full appeals process afforded by the NRC’s Atomic Safety and Licensing Board, “and they never brought it [the 401 certificate issue] to the Commission at all.”

The commission also said that the matter had already come up in 2006, during the five-year-long license renewal proceedings, when the NEC had argued that Entergy did not have a valid 401 certificate for Vermont Yankee..

“Entergy successfully moved to strike Petitioners’ [NEC and state] 401 argument as untimely,” the NRC wrote in its filing. The commission added that neither the state, nor the NEC, appealed the commission’s decision.

By contrast, the NEC argues that if the state or the organization had done so, “they may have prevailed on some of their concerns — or at least have been better informed as to the NRC’s position, leading them not to challenge the agency decision at all.”

“Simply put, petitioners may not file a lawsuit after sitting on their hands when given the chance to properly raise issues before the agency,” the NRC wrote.

From sitting on hands to doing a handstand

Iarrapino disagrees with the commission’s assessment of the NEC and state’s petitions.

The NRC wants to turn the “statute on its head,” he said, adding that the commission said “you should come into the process,” but “nothing in the CWA places responsibility on a state or citizens.”

Iarrapino said that Congress and the courts have recognized that CWA section 401 is an “incredibly important states’ rights balance.”

While the federal government has the authority over what companies can build within a state, the Congress has also decided that preserving water quality and protecting wildlife remains with the states.

The CWA placed the obligation for obtaining a 401 certificate on the licensee, he said. The act also prohibits a federal agency from issuing a license without the certificate.

It’s key to understand with this case that neither the state nor the NEC needed to pursue the certificate according to the rules of the CWA, Iarrapino said.

The NRC is “forbidden to issue a license” without a water quality certification or notice that the state has waived its authority regarding the water quality, said Iarrapino.

“They [NRC] didn’t break the law until 2011” when they issued Vermont Yankee’s operating license minus the certificate, he said. Therefore, NEC didn’t arbitrarily wait years before lodging a petition as the NRC claims.

Iarrapino also disagreed with the NRC’s assertion that the NEC did not exhaust the administrative process before the Atomic Safety Licensing Board. “They’re trying to have it both ways,” he said.

According to Iarrapino, the NRC brushed off NEC’s 2006 contention that the agency needed to get a 401 certificate from Entergy.

In an exhibit filed by the commission as part of the current case, the NRC described the NEC’s certificate contention as “moot.” Instead, said the commission, the 401 certificate belonged as an independent statutory requirement and was not relevant to the relicensing process.

Now, however, the NRC is arguing the NEC should have raised 401 certificate-related concerns earlier, said Iarrapino.

The commission’s arguments attempt to add another “hurdle into the process for the public,” said Iarrapino. If the agency wins this case, it could set a precedent of “the law as Congress wrote it doesn’t apply for us unless you [the public or state] remind us,” he said.

This case asks that the 401 certificate process afforded to Vermont under the CWA go forward, Iarrapino said.

As to whether the NRC would once again relicense VY, “We’re not pre-judging the outcome of that [process],” he said.

Thanks for reporting an error with the story, "NRC, NEC and state square off over VY clean water certificate"