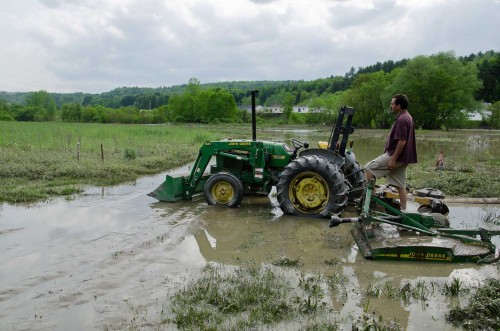 Throughout the night on Thursday, May 26, Mary and Eric Skovsted watched Joe’s Brook, a Passumpsic River tributary after which they named their small vegetable farm in Barnet, rise from its banks and flood 4 feet high across their fields and into the greenhouse. Peppers, eggplants, squash, basil, carrots, onions--their entire spring planting was lost to a juggernaut storm that dropped more than 5 inches of rain within two hours in their locale. The heavy rains were whipped by hail and high winds that sparked tornado warnings across central Vermont.

With wetter-than-average spring flooding in many parts of Vermont before the most recent storm, farmers around the state are debilitated by mud, lost crops and inaccessible or damaged fields. Bob Paquin, state director of the Farm Service Agency, says that federal aid is already coming in, and he expects the U.S. Department of Agriculture to declare some or all of Vermont an agricultural disaster area shortly.

“It’s probably the latest year in terms of being able to get on the fields that we’ve seen in a long, long time,” said Paquin. “This is more widespread: that’s one of the things that’s quite different this year.”

Big snows in March coupled with record rains in April and May took a cumulative toll and continued flooding mires damage assessments. Paquin said it’s not possible to “see the damage if it’s under water.”

The Farm Service Agency will provide on-the-ground reports to the USDA, and while federal assistance will provide aid throughout the summer, it will be fall before the overall cost of the flooding on Vermont’s farms is determined; the agency must have data from the harvest to allocate assistance.

Near the top of Beckley Hill in Barre Town, long-time grower Alan LePage hasn’t visited some of his low-lying fields in over a week.

“I can’t look at it,” he said on a recent afternoon when temperatures in the high 80s had little effect on water pooling between his raised beds.

Planting’s been a challenge this year, said LePage. In the spring of 2010, he began on March 19, getting a jump on the season with a warm spring. This year, wet soil held up planting until April 6, when he managed to seed some fava beans. Rain the following week stalled further planting until April 12. “I’m usually full-tilt by April,” he said.

Chronically wet fields dried enough by the week of May 23 to begin tilling in earnest. He managed to plant early peas, chard, lettuce, broccoli, artichokes, potatoes and leeks before the May 26 storm ravaged his hilltop farm.

“Now we’re back to ground zero,” he said, pointing at a row of unsellable, foot-tall Swiss chard pock-marked by quarter-size hail. “I’ve never seen anything like this.”

A field that LePage chisel-plowed earlier this year, a technique that usually improves drainage, is cratered with bare depressions where water pooled for days. Next to it, 500-foot rows extend into the distance, covered with black plastic that retains a water-line from flooding. His field crew vies with a bumper crop of slugs and snails. Withered shell pea seedlings, 4 inches tall, come up easily as LePage plucks them from the mud. After a week in over-saturated soil, the roots are rotten.

“Stuff like this isn’t workable,” he says, tossing aside a handful of sodden earth. “It shouldn’t be worked. I’m damned if I do, damned if I don’t.” 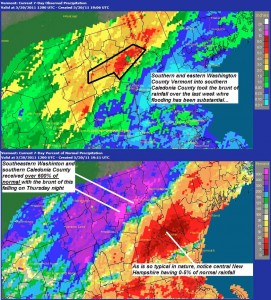 In Worcester, meteorologist Roger Hill tracks Vermont’s record wet spring. He tallied 19.94 inches of precipitation over the months of April, May and June, citing polar disturbances and global climate change. May’s monthly figures are stubbornly high--Washington, Chittenden, and Essex counties all received well over twice their normal amounts of precipitation for the month.

Over the week of the May 26 storm, Hill found that “southeastern Washington and southern Caledonia counties received over 600 percent of normal [precipitation], with the brunt of this falling on Thursday night.”

Between 6 inches and 10 inches of rain deluged those areas, closing roads and thinning Montpelier’s Saturday Farmer’s Market to 35 of the usual 50 vendors.

“Ten days of relatively dry weather would help enormously,” said Mary Peabody, a Community and Economic Development specialist at UVM’s Extension office in Berlin. Her office has been fielding calls from area farmers struggling to proceed with spring operations.

“Getting hay in is going to be a problem,” she said. “It’s time for the first cut, and they can’t get the heavy equipment in.”

Corn is also up against the clock, with two weeks left for most farmers to plant. Some growers planted corn and lost it, Peabody said, and some haven’t yet planted because their fields remain inaccessible. “Right now a lot of the stress is that people are delayed, can’t get on their land.”

For vegetable growers, Peabody said she’s heard no reports of blight, although continued wet weather threatens to rot this spring’s strawberry crop. She’s also concerned about pollination: Like humans, she explains, bees tend to hole up or “go to ground” when it’s raining.

“A Footnote to Mississippi”

Paquin, the director of the Farm Service Agency, which is responsible for distribution of USDA federal assistance to Vermont growers, sums up the situation with a Yankee style understatement – “this has been a really rough spring.”

“We may be a footnote to the Mississippi flooding... but [Lake Champlain] has been over flood stage for over a month,” Paquin said. “Usually things are quicker.”

Federal aid will come, although it may take months to reach farmers. Sugarbushes ravaged in a December 2010 wind storm just now received assistance through the FSA’s Emergency Conservation Program, the first of two types of cost-sharing assistance provided by the USDA. Vermont’s FSA recently obtained approval to dispense this type of aid to Essex County for flood damage, and several other requests are pending.

The next round of aid -- reimbursement for crop loss or inferior harvests meant to tide farmers through the winter--requires Shumlin’s touch. Paquin explained that once Gov. Peter Shumlin asks Tom Vilsack, Secretary of the USDA, to declare Vermont an agricultural disaster area, the USDA can move to approve that request, making Vermont eligible for assistance under the Farm Bill.

“We’ve talked to [the USDA],” said Paquin, who advises the federal agency on Vermont’s condition--no small task when his agency struggles to even access damaged locations. A declaration of agricultural disaster will be forthcoming for Vermont, he said, meaning the state will get in line with Mississippi for USDA disaster funding. A spokeswoman for the Vermont Agency of Agriculture verified that Shumlin has been in discussion with the USDA.

“With the scope of the damage nationally, there’s going to be a discussion about the need for additional money,” said Paquin. “The consequences are going to be felt for quite some time.”

At Joe’s Creek Farm in Barnet, help from the community tempers flood losses. The morning after Thursday’s storm poured 4 feet of water over her riparian fields, Mary Skovsted found neighbors wading in to help out.

“We were up at four in the morning, and people were calling right away. Neighbors were down in the field helping as soon as the sun was up. Bad knees, bad backs, people were there for hours,” she said. Area farmers donated transplants to help the farm begin again, and although Skovsted says they’re “not planning on making much of a profit this year,” the outpouring of support keeps them optimistic.

And while farmers, work crews and neighbors around that state struggle to navigate spring mud and flood waters--amid warnings of a churlish late-season frost--Skovsted says one of the hardest parts is tackling the damage each day: “We’ve just been mentally bogged down by it.”

See photos of the flooding at Joe’s Creek Farm at the website, www.joesbrookfarm.com.

Thanks for reporting an error with the story, "Vermont farmers debilitated by floods hope for federal relief"