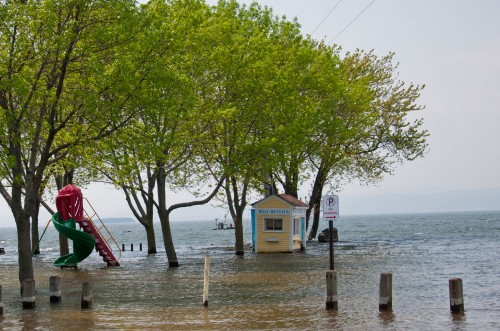 Perkins Pier on Lake Champlain in Burlington on Thursday, May 26, 2011. VTD/Josh Larkin

Record-breaking rainfalls have inundated Lake Champlain since the end of April, but Mother Nature’s latest assault was located in central Vermont, miles from the lake. Floodwaters unleashed by last Thursday’s heavy rains didn’t take long to sweep down the Winooski and Lamoille rivers, gutting central Vermont roads and sweeping mud into homes and businesses and adding to the lake’s woes.

By Monday, New England’s largest body of water stood at 102.7 feet, six inches higher than the level reported on Friday, and almost 3 feet above flood stage, according to the National Weather Service. Mark Bosma, public information officer for the Vermont Division of Emergency Management, said he didn’t expect the lake to rise above 103.25 feet, the record-breaking flood level set two weeks ago.

Roger Hill, a meteorologist based in Worcester, says heavy rainfall this spring has been 300 percent to 400 percent above normal. The excess precipitation has not only swelled the lake, but also carried with it a familiar pollutant: phosphorus. Both the Lamoille and Winooski rivers flow into the lake.

The Lake Champlain Basin Program reported earlier this month that the Winooski River had dumped 77 metric tons of phosphorus into the lake within the first four months of the year – about half of the annual total amount, on average, of 154 tons.

Prior to Thursday night’s tempest, degradation of river and lake banks was already an issue. Eric Howe, Lake Champlain Basin Program technical coordinator, said, “There has been a lot of erosion along the tributaries, as well as the lake’s banks.”

The sediments are problematic because, as they wash back into the water and settle to the bottom of the lake, they can release phosphorous.

If conditions are right — if the weather is warm, waters are calm and enough phosphorous is in the water &mdah blue-green algae can take hold in the lake, according to Howe. In 2009, the Missisquoi Bay, in the northern reaches of the lake, was contaminated with elevated levels of toxins from blue-green algae blooms. Beaches were closed, and residents were advised to avoid any contact with the water.

When blue-green algae grows, or blooms, it depletes the water of oxygen. The blooms are a threat to human health and other organisms.

“It’s really hard to say what will happen with the blue-green algae,” Howe said. “More calm water and sunshine is needed.”

Field crews are now out on Lake Champlain gathering data to determine how much phosphorus has entered the lake. Results from the sampling will be made available next month, Howe said, and final numbers will be released next winter.

Louis Porter, the Lake Champlain lakekeeper for the Conservation Law Foundation, said there are three major sources of phosphorus, including: runoff from urban areas, dirt roads and building roofs; agricultural runoff from farms and manure; and runoff from waste water treatment plants.

“We’re not getting the phosphorus reduction we need to improve and preserve the lake as it is,” Porter said. “We don’t have the regulatory and permitting structures in place to reduce the pollution from farms, from storm water or from waste water plants.”

Porter also contended the current flooding situation is directly connected to the climate impacts of a warming planet.

“Climate change is likely to cause more precipitation, more violent storms, both of which bring more phosphorus into the lake,” Porter said. “When you have this kind of flooding and this kind of river flow it causes more erosion, (it) causes more water over manure farm fields, it causes more stress on the storm drains and storm water systems.”

Bill McKibben, the Schumann distinguished scholar at Middlebury College who wrote the seminal book about climate change in 1989, End of Nature, agrees with Porter.

“Since warm air holds more water vapor than cold, we've made the atmosphere on average about 4 percent moister than it was 40 years ago,” McKibben wrote in an email. “This loads the dice for downpours — below 32 degrees that's snow, above (that) and it’s rain. It also, of course, means more evaporation, so both flood and drought seem on the increase. You can't say any particular storm 'comes from global warming.' You can say: Climatologists are not surprised to see years like the one we're having.”

McKibben recently wrote an op-ed for the Washington Post about the correlation of climate change and the weather catastrophes occurring around the world. (VTDigger.org republished the piece on May 27.)

“Those things cost money, but the cost of not doing them &mdah in my mind &mdah is much greater,” Porter said. He also points out that if blue green algae takes over a section of the lake, as it did in 2009 in the Missisquoi, it will render that area unusable for swimming, fishing and boating.

“We live in a state that benefits greatly not only from tourism directly but also from a kind of Vermont brand, a Vermont aesthetic that allows us to sell not only ski vacations but lifestyles,” Porter said. “Those benefits…are all partly dependent on our green aesthetic and green living reputation and ethic — I think that is at a risk.”

Thanks for reporting an error with the story, "Flooding could create breeding ground for blue-green algae blooms in ..."