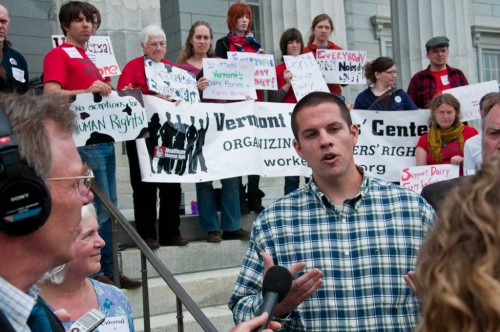 The Health Care Conference Committee meetings on Monday were more like one seemingly never-ending sit-in or vigil than a series of hearings designed to address technical corrections to H.202, the universal health care reform bill. The meetings were held sporadically on Monday throughout the day. The last meeting was at 8 p.m.

The lawmakers met off and on over the course of 10.5 hours, the committee, comprised of three senators and three representatives, sorted out the details of H.202 and the controversial Brock-Sears amendment.

Some of the 30 to 40 activists from the Vermont Workers Center, who haunted the hallways of the Statehouse most of the day, attempted to wait out the laborious committee process, and they managed to succeed.

The activists were there for one reason: To make sure lawmakers changed the Sears-Brock amendment, a provision that, in their view, explicitly excluded undocumented workers out of the state’s new health care system. Activists said the provision in state law was redundant and unnecessary.

The activists’ persistence appeared to pay off. The committee members decided to strike the amendment language and replace it with a study of coverage and services for undocumented residents.

Meghan Sheehan, one of the activists, said she was pleased that the language had been changed. “This is a divisive issue that is used as a wedge often,” Sheehan said. “Our campaign is clear health care is a human right regardless of where a person is from. We can’t exclude the most marginal people in our community.”

Peg Franzen, president of the Workers Center, said the amendment violated a key principle of the campaign. “This had to happen; we had to be true to the mission,” Franzen said.

The new provision includes four findings, or statements about current federal laws that prohibit the use of Medicaid funding for undocumented residents.

It also calls for a report to be issued in January 2013 that would be presented to the Legislature. The study must provide information about the potential costs of services provided to undocumented immigrants by health care professionals; increases in the cost of care delayed due to the lack of coverage for primary care; and the potential costs of providing coverage through Green Mountain Care, “including any state funds necessary to fund the services.”

The new language also requires the Secretary of Administration to work with the Vermont congressional delegation to provide a mechanism for legal status for undocumented farmworkers and to clarify impacts of covering or not covering them through Green Mountain Care.

The conference committee also worked on a number of smaller issues, including when the Green Mountain Care board would form (the House proposed an October 2011 startup date, the Senate wanted the board members, with the exception of the chair to be hired in January of 2012) and a change in the number of insurance companies on the Medicaid advisory board (the Senate proposed three; the House didn’t include any – they settled on one insurance representative to be appointed by the commissioner of the Department of Vermont Health Access).

They also discussed a co-pay provision for primary and chronic care that several members of the committee objected to. “We don’t want cost-sharing to be a barrier to primary care,” Larson said.

Language about the economic viability of the plan was it issue for a while as well. Sen. Kevin Mullin, R-Rutland, who proposed a series of fiscal conditions that must be met before Green Mountain Care is implemented, said the requirements are necessary.

“This is a check point against ourselves,” Mullin said. “It puts pressure on future legislatures to make sure it’s financed properly.”

The conference committee will meet again today to finalize details of the bill.

Thanks for reporting an error with the story, "Lawmakers call for study of migrant worker health care"