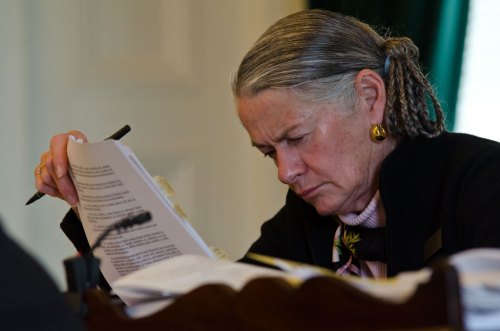 In a historic vote on Tuesday, the Vermont Legislature created the enabling legislation for a first-in-the-nation universal health care system. The state Senate approved the visionary plan for a single-payer system in a 21-9 vote after four hours of debate. The split was largely along party lines.

Gov. Peter Shumlin, a Democrat, campaigned on a promise to create a single-payer system in Vermont that would contain health care costs and give all of the state’s residents universal access to medical care. On Tuesday, Shumlin made good on the first step toward fulfilling that promise, and just five hours after the Senate vote, he marked the legislative victory in an appearance on MSNBC’s “The Rachel Maddow Show.”

Shumlin said in a statement to the Vermont press: “Today the Legislature took a huge step toward making Vermont the first state in the first in the nation to control skyrocketing health care costs and remove the burden of providing health care coverage from small business owners. This bill is good for Vermonters and Vermont businesses.

Many Vermont businesses, however, believe otherwise. Though small employers have said they will benefit, some larger employers actively lobbied against the bill. Opponents of H.202 argued that the legislation would leave businesses in the lurch during the transition period between 2013 and 2014 when the state is required under federal law to participate in insurance exchanges. The opposition was led by insurance brokers (the Fleischer Jacobs Group, Business Resource Specialists), business associations (Vermont Chamber of Commerce, Vermont Grocers’ Association and Vermont Retailers Association), large employers (Dealer.com, Biotek, Rhino Foods and IBM). The Senate debate on Monday and Tuesday centered on changes to the legislation that would have made it more palatable to these groups.

Sen. Vince Illuzzi, R/D-Essex Orleans, who proposed two amendments that would have made the bill more business friendly, said companies are afraid “we will end up with a plan most won’t be able to afford.”

The legislation sets the state’s health care system on a new trajectory. Instead of continuing to use an insurance model for covering the cost of care, the bill moves the state toward an integrated payment system that would be controlled by a quasi judicial board and administered by a third party entity. The system would be funded through a broad-based tax.

The universal health care system would be implemented in 2014, if it clears 10 very high hurdles, including the receipt of a federal waiver. Otherwise it wouldn’t kick in until 2017.

Longtime single-payer advocate Dr. Deb Richter was ecstatic about the Senate passage of the bill.

“I’m absolutely thrilled,” Richter said. “It’s one of the best days of my life. I’ve given 400 speeches over the last 10 years and it feels like the work was worth it. We have a ways to go, but this is a step in the right direction.”

A universal health care system is the only way to cover everyone and contain costs, Richter said.

The passage of H.202 marks the first time any state in the country has attempted to provide universal care and a cost containment system that addresses administrative costs, hospital budgeting and uniform payments to doctors, Richter said.

Whether the federal government will give Vermont a waiver to adopt a universal health care system in 2014 is an open question. Richter said the state has a 50-50 chance of getting the exemption from the Affordable Care Act. Even so, she believes Vermont’s attempt to create a single-payer system is worthwhile.

The Senate debate focused on the state’s implementation of the insurance exchanges that are required under federal law. The Affordable Care Act has mandated that states provide an actuarial value for insurance products (the insurance equivalent of a per unit price mechanism that allows consumers to compare the cost of on the shelf grocery items). The federal government has set up very general guidelines for the actuarial levels for insurance products insurers must provide under the exchange. The idea is to create an easy system for comparison between health insurance benefit plans that offer a dizzying array of deductibles, co-insurance, co-pays and premiums. The products, under the federal requirements, range from bronze (60 percent actuarial value) to silver (70 percent), gold (80 percent) and platinum (90 percent). It also puts minimum requirements on the “qualifying plans.” Many of these mandates are already in Vermont law. Insurers, for example, are not allowed to “cherry pick” consumers who are healthy and create pools without a cross-section of the sick and healthy populations.

Read this summary of the ACA requirements from Kaiser Foundation.

The Affordable Care Act requires individuals without insurance to buy into the exchange or face a $695 fine. Families of four with incomes of less than $88,700 qualify for tax credits. Businesses with more than 50 employees that do not buy insurance face a penalty of $2,000 per worker.

The fight between employers and proponents of H.202 was about the potential for mandatory inclusion of businesses that have between 50 and 100 workers in the exchange. Sens. Hinda Miller, D-Chittenden, and Illuzzi argued that requiring companies of that size to participate in the exchange could jeopardize their economic viability. Employers in that range tend not to self-insure and so are not protected under the Employee Retirement Income Security Act.

The federal law allows states some flexibility. States can decide what benefit plan levels can be offered, for example. They can also determine the size of the businesses that must be included in the exchange. The Shumlin administration pushed for intent language in the bill that could have led to the inclusion of businesses with 50 to 100 employees into the exchange. Proponents of H.202 have said it’s important to include these 28,000 workers in the state’s insurance exchange in order to build toward a single-payer system.

An amendment proposed by Sen. Diane Snelling, R-Chittenden, and approved by the Senate struck the intent language. The Green Mountain Care board, which will oversee the health care reform effort including the exchanges, is charged with producing a report that would outline the impact of excluding the 50-100 employee group on the exchange, which the Shumlin administration wants to use as a stepping stone toward the single-payer system.

Illuzzi proposed two amendments that would have forced the state to include a broader array of insurance carriers in the exchange, would have specifically allowed health savings accounts and high deductible plans under the exchange and would have allowed “nonqualified” plans outside the exchange. H.202 allows for two carriers.

“Let’s not kid ourselves it will be more than one carrier,” Illuzzi said on the Senate floor. “It will likely be Blue Cross Blue Shield. It will be two carriers in name only. Both will be required to offer same (plans). It will be a change without a difference.”

Anya Rader Wallack, Shumlin’s special assistant on health care, said she was impressed by the Legislature.

“A lot of people worked very hard educating themselves in a short period of time,” Wallack said. “This isn’t simple stuff. I was impressed with the amount of effort both bodies have put into this.”

The Shumlin administration was heavily involved in drafting the bill, H.202. By the time the legislation reached final passage it had changed somewhat from its original incarnation, which was based in part on recommendations from Professor William Hsiao, the renowned Harvard economist who created a single payer system for Taiwan. 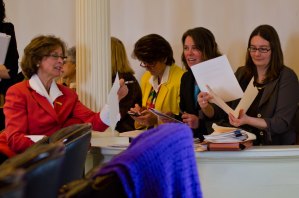 Over the next year, the Shumlin administration will hire a director of health care reform and the chair of a quasi-judicial board. The board would be in place by January 2012 and would begin the arduous task of sorting through the maze of federal laws, waivers, benefits, provider reimbursements, system financing and cost containment options.

H.202 will be read in the House Health Care Committee on Wednesday morning. Rep. Mark Larson, D-Burlington, said he expects the bill will go to conference committee in several days. He expects to have no major beefs with the Senate version.

“The core composition of the bill remains identical to what passed in the House,” Larson said. “There are differences between the two bills but they are things we can work out.”

Larson said those details include a change in the dynamic of the board. “We want to make sure it’s an independent board.”

He also referred to the so-called “Mullin” amendment, which set conditions for implementation of Green Mountain Care, the single-payer style system that would be created under H.202. Larson said he thinks the new criteria for the implementation standards need to be more clearly defined.

“It has to be clear what hurdle has to be overcome,” Larson said.

Thanks for reporting an error with the story, "UPDATED: Vt. Senate gives final nod to universal health care bill in ..."