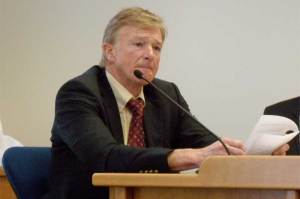 Doctor Robert McCunney, an MIT research scientist, admitted to not having read a key report he based his testimony on. Photo by Carl Etnier.

Parties concerned about noise from wind turbines in the proposed Kingdom Community Wind project scored points Thursday when Green Mountain Power's noise expert admitted under questioning that he hadn't read the study on which he based his main conclusion.

Robert McCunney came to the Public Service Board hearings sporting impressive credentials: He is a medical doctor employed as an MIT research scientist, and his publications include co-authoring what he termed “a comprehensive review of the peer-reviewed scientific literature respecting wind turbines and human health.” Yet a Vermont lawyer representing the rural towns of Albany and Craftsbury pressed an admission from him that not only had his testimony cited a paper he hadn't read, but also that he disagreed with its conclusion when it was rephrased for him.

McCunney's written testimony concluded that the “risk of any direct adverse health effect at levels below 45dB (A) is virtually non-existent,” citing a Dutch study. Yet when attorney Jared Margolis pointed out that the study doesn't say “that there's no health risk or minimal health risk under 45 decibels,” McCunney admitted that he had relied on a World Health Organization paper that cited the Dutch study.

McCunney was called in by GMP to rebut testimony about noise from witnesses for other parties to the hearings on the private power company's application to build 20 or 21 wind turbines on a ridgeline in Lowell, for a total maximum capacity of 50 to 63 megawatts. The witnesses raised concerns about how loud the wind turbines would be, and also the effects of low frequency sounds and “infrasound,” which is lower in pitch than the normal threshold for human hearing.

In previous wind cases, the Public Service Board has restricted the maximum noise at the outside of buildings in the project area to 45 decibels, measured over an hour, or 30 decibels inside. Margolis says his clients in Albany and Craftsbury are concerned that the allowed noise levels are too high, and that averaging measurements over an hour allows noise significantly higher than 45 decibels for shorter periods, which could disturb people's sleep. He also raises the possibility that once the project is built, even if it's in compliance with the standard for existing buildings, a property owner could not build a new house closer to the turbines, because the noise would be louder there.

Nancy Warner, president of the Lowell Mountains Group, which opposes the project, goes further. “If we have 100 acres, and we want to sit on a chair on that line that butts up against the Wileman property [on which the projected turbines would be sited], we should have the same standards applied there that we would if we were sitting in our home.” That is, they want the 30 decibel indoor standard to apply outdoors, at the property line.

Margolis’ cross-examination of MIT's McCunney was a slow, arduous process. Margolis reserved 90 minutes for the cross-examination, and McCunney seemed to try to run down the clock. Margolis asked a simple yes or no question, and McCunney read a sentence or paragraph from a scientific paper. Margolis would ask about one thing, and McCunney would answer on a different topic. McCunney's main area of expertise is hearing loss, and at one point he responded only about hearing loss when answering multiple questions regarding the public health effects of noise. Margolis, visibly frustrated, pleaded with the witness, “Please stop adding 'noise-induced hearing loss.' I would ask you to please keep in mind my question.”

Margolis questioned McCunney's sweeping conclusion that noise below 45 decibels has a “virtually non-existent” risk of adverse health effects, based on one Dutch study. The study was on transportation noise, which McCunney agreed under questioning has a different character than the “swish swish” of wind turbine blades. McCunney also agreed, when the relevant text was pointed out to him, that the study did not even assess health effects of noise under 45 decibels.

The 45 decibel standard evaluated in the study was averaged over a year. A table in the study explained what that meant in terms of number of times a year a train or truck could rumble by and make a noise above 45 decibels that would average out to 45 decibels a year. A 90 decibel noise, which is louder than a 40 mph diesel truck 50 feet away, could occur as many as 332 times a year and still not exceed the 45 decibel standard. A 75 decibel noise, which is louder than a 50 mph passenger car at 50 feet but not as loud as a garbage disposal at 3 feet, could occur over 10,000 times.

McCunney acknowledged that 90 decibel noises, hundreds of times a year, could cause adverse health effects. He was uncertain about the effect of 10,000 occurrences of 75 decibel noises. Yet puzzlingly, he also remained steadfast in his conviction that there was a “virtually non-existent” risk of adverse health effects for noise averaged out over a year to 45 decibels.

Margolis tried again to lead McCunney through the logic: Hundreds of 90-decibel events can average to 45 decibels over a year; experiencing hundreds of 90-decibel events poses a health risk; therefore a standard of 45 decibels averaged over a year poses a health risk. McCunney would have none of it; he merely reiterated that the authors of a WHO report had read the Dutch study on transportation noise and concluded that the 45 decibel standard protected human health.

Margolis also produced the transcript of a 2010 webinar on wind turbine noise and health that McCunney had participated in. In it, McCunney said that for a wind turbine near his home, he would want to have noise levels “below 35 decibels...maybe 40.” A 45-decibel sound is perceived as twice as loud as 35 decibels.

Health benefits of wind turbines were discussed in one of the exhibits McCunney submitted into evidence. A doctor in Maine, in what is apparently testimony regarding wind turbines and the Maine noise standard, wrote, “There are tremendous potential health benefits to wind turbines, including reductions in deaths, disability, and disease due to asthma, other lung diseases, heart disease, and cancer... Wind turbines mean less dependency on foreign oil and coal that contribute to global warming and pollution (coal produces carbon dioxide, acid rain, smog, particulate pollution, carbon monoxide, and mercury), which in turn contribute to the diseases above.”

Robert Dostis, a GMP vice-president attending the hearing, said that the company has no position on what noise standard the board applies to the Kingdom Community Wind project. However, the company did not rule out appealing the Board's order on the basis of the noise standard used. Green Mountain Power is owned by Gaz Metro based in Quebec. Thanks for reporting an error with the story, "Lowell Mountain: Expert supports Vermont's wind decibel standard"