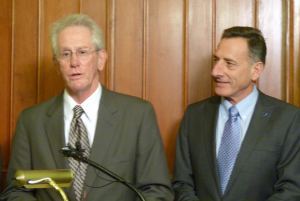 Steve Kimbell, left, will be the new commissioner of BISHCA

On Monday, Gov.-elect Peter Shumlin chose the members of the “dream team” who will lead his signature effort to create a single-payer health care system in Vermont.

The four members of the team will manage different facets of the reform from key positions in state government.

Shumlin campaigned on the idea that a centralized, Medicare-style state medical plan would control the skyrocketing cost of health care in part by eliminating duplicative administrative costs. If Shumlin is able to pull it off, Vermont would be the first state in the nation to offer a government-administered, universal health care benefit to all residents. In order to do so, he must obtain several federal waivers.

At a press conference held at the transition offices, Shumlin took a page from his stump speech in his opening remarks.

“If Vermont continues to spend $1 million more tomorrow than we did today on health care, which is what we’re doing now, we will bankrupt small business, we will discourage job growth and we will bankrupt the middle class,” Shumlin said.

Shumlin told reporters that the four administration officials he has selected have the expertise to help make a single-payer system possible in Vermont, in spite of the very difficult challenges of implementing a system that will likely meet stiff resistance from doctors, hospitals, the pharmaceutical industry and others. Dr. William Hsiao, a health care economist from Harvard University, has been charged with designing three health care systems for the state, including a single-payer system. He will unveil his recommendations in mid-January to the Legislature; tomorrow, he is scheduled to speak at 2 p.m. in Room 10 of the Statehouse before the Vermont Health Care Reform Commission.

“We as a team are committed to leading our way out of this challenge by bringing together insurers, hospitals, healthcare providers, consumers and business people to write a plan that will work for Vermont and hopefully be a shining example to the rest of the country,” Shumlin said. “Our promise is we will work as hard as we can on a single payer health care system that contains costs and provides every Vermonter affordable health care.”

In order to move ahead with a single payer plan, Vermont will need a waiver to get around requirements under the Affordable Care Act that it participate in health insurance “exchanges”; it will also need a waiver to bypass the Employee Retirement Income Security Act, the law that protects employer rights to dictate the terms of their benefit plans. Both waivers would require congressional action.

Shumlin doesn’t see either waiver as an insurmountable obstacle.

“The goal is to have a health care system where health care follows the individual that is not the obligation of the employer,” Shumlin said. “That would be really attractive to … ERISA providers.”

“We will crumble of our own weight if we don’t act,” Shumlin said. “So the question is, will it be a failure if we don’t act in two years with a thoughtful bill that helps to reinvent the system?"

Nor does he see potential problems with out of state providers, such as Dartmouth-Hitchcock Medical Center in Lebanon, N.H., as an issue. Shumlin said patients who use state subsidized programs such as Dr. Dynasaur already have access to Dartmouth, and the reform measures wouldn’t prevent patients from using the New Hampshire hospital.

Shumlin has long advocated for a digital medical card that would contain a patient’s records and billing information; he envisions a payment system in which bills would be adjudicated immediately. He also said the medical industry should be rewarded for prevention efforts.

He said he does not want to place limits on access to care, by dictating how many times a patient can access the emergency room in a given year, for example, as a way to control costs.

“One of the big mistakes we make when we talk about reforming health care is that we’re somehow talking about rationing health care,” Shumlin said. “We want every Vermonter to have access to quality health care to keep them healthy and lead productive lives. It’s more about choices we make during our lives that cost us money, than it is about access to care. It’s how we eat, what we eat, how we exercise, how we lead our lives, the choices we make about tobacco, alcohol and other substances. We have a lot of work to do but it’s got to be a holistic approach to keeping Vermonters healthy. We’re really talking about how we deliver the care.”

Shumlin supports “end of life choices,” but he said the issue will not be part of his health care reform initiative.

“We need to have a much more open conversation about how we spend our health care dollars and how we ensure that any Vermonter that lives here not only has an extraordinary start in life but also has a say in how they end their life,” Shumlin said. “I think individuals with their physicians when they are terminally ill ought to be able to make choices about how they spend the last two or three weeks of life, but I don’t think that’s related to health care reform.”

At this point, Shumlin argued, letting the system continue as it is will lead to significant problems. He said doctors are leaving rural parts of the state and hospitals are under “tremendous economic stress” because of reimbursement rates.

“We will crumble of our own weight if we don’t act,” Shumlin said. “So the question is, will it be a failure if we don’t act in two years with a thoughtful bill that helps to reinvent the system? Of course it will be a failure. We have an obligation to get this right, but let’s be mindful of where the minefields are. They’re at every corner, every step. That’s why we put this dream team together to help us wade through it.”

Anya Rader Wallack will serve as a special assistant to the governor and lead the single-payer implementation effort. Wallack, president of Arrowhead Health Analytics, a Massachusetts-based health policy consulting firm, has several decades of experience in the private and public health care sectors. Wallack was part of Hillary Clinton’s health care task force in 1993, and she was a policy director and deputy chief of staff for Gov. Howard Dean. She recently served as a president of the BlueCross BlueShield of Massachusetts Foundation and executive director of the Massachusetts Medicaid Policy Institute. Wallack’s salary as a member of the Shumlin administration will be $125,000.

Wallack said she first started thinking about the merits of single-payer health care 20 years ago, though then, as now, figuring out how “we get from here to there” remains the biggest challenge.

“I think what I’ve learned over the last 20 years is you can do a lot of progressive policy work at the state level, but the impact is fairly marginal and we really need to do something dramatically different if we want to provide coverage for everybody with a cost that’s sustainable,” Wallack said.

Steve Kimbell, who recently retired from Kimbell Sherman Ellis, a prominent Montpelier-based public affairs firm, will be the commissioner of the Department of Banking, Insurance, Securities and Health Care Administration. Kimbell founded KSE in 1987 with Bob Sherman and ran the affiliated law firm Kimbell Storrow Buckley Hughes. He managed statewide campaigns for Madeleine Kunin in 1978 and 1982. Kimbell will earn $127,000 a year as commissioner of BISHCA.

Kimbell said: “I can say to the regulated community what they can expect from me as commissioner is a consistent, predictable and collaborative approach to regulation of these key industries.”

Dr. Harry Chen, an emergency room physician with the Rutland Regional Medical Center, is the commissioner-designee for the Department of Health. Chen served four years in the Vermont House of Representatives and was vice chair of the House Health Care Committee. Dr. Chen’s salary will be $115,000.

Susan Besio, the current commissioner of the Department of Vermont Health Access, will continue to manage Vermont’s Medicaid, State Children’s Health Insurance Program, Catamount Health and VHAP. She previously served as deputy commissioner then commissioner of the Vermont Department of Developmental and Mental Health Services from 1996 to 2004. She was the director of planning and operations for the Agency of Human Services from 2004 to 2006. Her salary will be $100,714.

Thanks for reporting an error with the story, "On video + story: Shumlin names health care “dream team”; Kimbell..."