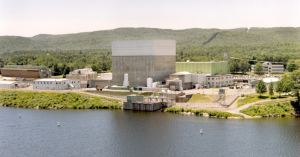 A new nonprofit organization, Green Mountain Future, made its debut on Wednesday with an advertisement bashing Republican Lt. Gov. Brian Dubie’s stance on Vermont Yankee. The ad is endorsed by the Vermont League of Conservation Voters and sponsored by the Democratic Governors Association.

Dubie’s campaign immediately issued a press release that labeled the ad as a negative “attack” from “Peter Shumlin and his team.”

Corry Bliss, who is managing Dubie’s campaign, said the ad shows that Shumlin has broken his pledge to refrain from negative campaigning.

Bliss and Kate Duffy, the communications director for Dubie, did not answer calls for comment. What follows is a statement from a press release. “Peter Shumlin and his team recognize his jobs-killing record of taxing and spending is a loser, especially when compared to Brian Dubie’s 10-point plan to cut taxes and grow jobs, so they have no choice but to make negative ads,” Bliss stated in a press release.

Bliss also demanded that Shumlin return $8,000 that he received from David Blittersdorf, who was recently involved in a brouhaha over $4.3 million in state tax credits his companies received from the Clean Energy Development Fund. Blittersdorf left the CEDF board not long before the credits were awarded.

“Between his questionable ethics and his long record of raising taxes and voting against the interests of small businesses, Peter Shumlin’s team wants to talk about anything else and has to resort to negative ads,” Bliss said.

The Shumlin campaign denies any wrongdoing in connection with the Blittersdorf tax breaks.

Alex MacLean, Shumlin’s campaign manager, said they had no knowledge of the ad, which was produced by Green Mountain Future. She said in an interview: “It is not our campaign ad. We’ve never seen it before.”

Dubie, a candidate for governor, has said he supports the continued operation of the 38-year-old nuclear power plant located on the banks of the Connecticut River in Vernon. In January, the plant was found to be leaking radioactive isotopes. In February, the Vermont Senate voted against relicensure of the plant for an additional 20 years. The license for the plant is set to expire in March 2012.

“When it comes to Vermont Yankee, there’s no question where Vermonters stand: They overwhelmingly want to protect the health and welfare of our state and, through their legislature, have said ‘no’ to relicensing the plant,” said Todd Bailey, executive director of the Vermont League of Conservation Voters, in a statement. “Brian Dubie supported Vermont Yankee’s corporate owners after radioactive material was found in the groundwater. And he stands with them now even after acknowledging that they breached the public’s trust with regard to the safe operation of the plant.”

The 30-second ad features photos of Dubie, tearsheets from newspapers and images of the Vermont Yankee Nuclear Power plant in Vernon. The narrator uses headlines from Vermont newspapers and statements from TV broadcasts alleging that Dubie would have “voted to let the reactor keep operating.” (As lieutenant governor, he only casts tie-breaking votes.) This information is intertwined with statements about the tritium leak, “warning signs” that the plant isn’t fit to stay open another 20 years, and questions about the Entergy’s commitment to run the plant reliably.

The ad is running on WFFF, WVNY, WPTZ, WCAX and NESN.

Green Mountain Future is run by Drew Hudson, a political operative who has worked for MoveOn.org, Democrat Gaye Symington’s 2008 gubernatorial campaign and VPIRG. Hudson said he is a volunteer for the tax exempt 527 group, which was just formed last week.

“We hope to start a conversation around the state about small “p,” progressive issues,” Hudson said.

According to its 8871 filing with the IRS, Green Mountain Future’s mission is “to communicate with the citizens of Vermont about economic, environmental and other issues of importance without expressly advocating the election or defeat of any candidate.”

Ben Metcalf, the chief operating officer of the Democratic Governors Association, said in a statement that “Green Mountain Future is asking the sort of tough policy questions that deserve answers and we are proud to stand with them.”

In its “largest ever” expenditures on state races, the DGA is supporting a dozen bids for governor across the nation, including California, Florida, Colorado and Texas in this election cycle, according to Alexander Burns of Politico.com. But the DGA may not have enough money to catch up, Burns reports. The Republican Governors Association, he wrote, “ended the second quarter of 2010 with $40 million in the bank,” compared with the DGA’s $22 million.

527s are not directly affiliated with campaigns – they can be formed by trade associations, wealthy individuals, unions and interest groups. They are not required to file information about their activities with the Federal Election Commission. Instead, they are regulated by the Internal Revenue Service. According to the Center for Responsive Politics, “Financial restrictions on 527s are very few: there are no upper limits on contributions to these committees, and no spending limits, either. Any type of donor may contribute, from individuals to unions to corporations, even other non-profits. There is no specific prohibition on foreign contributions.”

527s funnel what is called “soft money,” into activities that can influence an election such as ads and policy debates. State campaign finance rules apply with regard to direct contributions to candidates.

Thanks for reporting an error with the story, "TV ad blasts Dubie’s support of Vermont Yankee"