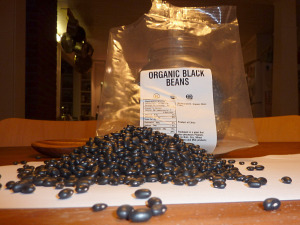 For years, I’ve kept a store of rice, oats and canned goods, along with pickles, potatoes, shelled beans and frozen vegetables, in the cellar of our old farm house. I buy food in bulk quantities and put up as much as I can from our garden. Going to all this trouble in summer is like holding down an extra part-time job, but I do it because I like to have some idea of where my family’s food comes from.

Recently, though, I began to have doubts about the bulk buying part of my hoarding strategy. Three months ago, I ordered a 5-pound bag of organic black beans from my local food-buying club. When the bag arrived, I was dismayed to find that the source origination cited on the package from United Natural Foods Inc. was not California, or the Midwest.

The country of origin was a place I tend to associate with melamine-laced baby formula: China.

Until that point, I had naively assumed that the bulk food I ordered through the club and purchased from my local co-op was grown domestically.
It turns out my assumption was wrong. A surprising number of organic products available at co-ops and natural food stores in Vermont now come from China.

Since I bought that first bag of Chinese beans in September, I’ve asked a lot of questions and been transferred from one communications officer to the next, put in voicemail hell and given punts like my personal favorite, “Could you please put your questions in an e-mail?” (So that we can ignore them forever.)

I wanted to know why co-ops don’t post the country of origin on bulk foods; what steps USDA officials have taken to regulate organic foods from China; and why these products aren’t produced domestically. Each of these lines of inquiry is taken up in a series of stories this week in Vtdigger.org, “Your organic food: Now made in China.”

For the most part, store managers were forthcoming, as were representatives from Eden Foods, which is privately owned, and Frontier, which is a cooperative owned by food co-ops around the country.

I was stonewalled by the major corporations. I made a dozen calls to UNFI, which is based in Providence, R.I., and I was never able to reach a company official. Nor did I get through to the Organic Trade Association or Hain-Celestial Inc., one of the largest organic food manufacturers in the U.S.

In my long-running communications with the USDA National Organics Program, I was referred to the Web site repeatedly, and though I received verification of certain tips from sources, I did not get an interview with an official from the agency.

So why am I telling you all this? Why should you care about how difficult it has been to report this story? Because, dear reader, when government officials and businesses are this reluctant to provide information about basic quality controls for organic foods that are grown in China, one wonders what they don’t want us to know.

Thanks for reporting an error with the story, "Your organic food: Made in China Part 1. Why you should give a hill o..."